New Horizons has now spotted every one of Pluto's satellites...all the ones we know about, that is. The animation released today contains four images taken between April 25 and May 1, and after heavy processing, they reveal the faint signals of the smallest moons. New Horizons is still more an astronomy mission than a geology mission; the targets are just dots of light, and heavy processing is required to make them visible. But the images will only get better over time.

This animation is composed of four sets of images taken between April 25 and May 1, 2015 at a distance of roughly 90 million kilometers from Pluto. Each observation consists of five 10-second exposures that have been added together to make the image in the left panel. Images were extensively processed to reduce the bright glare of Pluto and Charon and largely remove the dense field of background stars (center and right panels). This reveals the faint satellites, whose positions and orbits - along with those of brighter moons Nix and Hydra - are given in the right panel. Styx, Nix, Kerberos, and Hydra orbit at 42,000; 49,000; 58,000; and 65,000 kilometers away from the Pluto-Charon barycenter, respectively.

All of the component images for this animation -- and more, taken days more recently -- have already been released on the New Horizons raw images website. But don't get too excited about building animations of spinning moons from the raw images yet. Kerberos and Styx are too faint to be visible in the versions of the images released through that website. The raw images are shared with JPEG compression, which reduces the quality of the images, essentially hiding or even erasing objects as faint as the tiniest moons. It takes a lot of work to reveal even Hydra and Nix, but it's work that's being doggedly pursued at unmannedspaceflight.com.

In two days, on May 14, New Horizons will stop taking photos for two weeks in order to point at Earth and empty out its data recorders. So you can anticipate more data to be released in the next couple of weeks, but it won't appear significantly better than what you can see in the animation above. When New Horizons returns to pointing its optical instruments at Pluto again on May 28, it will be taking full-resolution photos of Pluto and Charon roughly daily for the rest of its approach, and all of the images will be observably better than Hubble. (See this blog entry for a table describing upcoming observations.) Maybe, some time next month, New Horizons might spot some moons we didn't know about before. Wouldn't that be cool? Some time after that, New Horizons will get close enough that it will turn from an astronomy mission into a geology mission. It's getting real, folks!

Until then, enjoy a performance of the moons of Saturn playing the roles of the objects in the Pluto system: 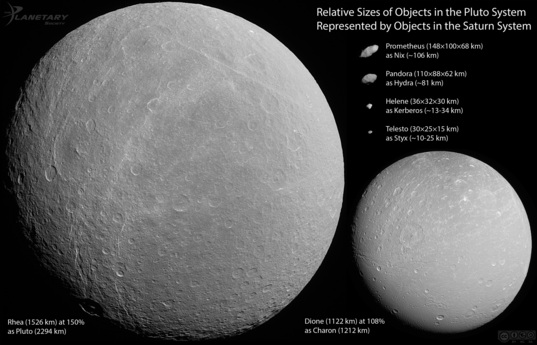 I harbour a quiet, whimsical hope that Charon will have a moon of its own. There is a fuzzy but distinct blob starting off near Nix in the 2nd image, and flying off to the left over the next two. Any idea what it is?

I noticed that blob as well. It's apparent motion is faster then that of the moons. I'm inclined to believe that it is some kind of artifact.

Or say that's it is real, perhaps it's a plume from an impact event on Hydra?