There is one less robot exploring the solar system today. MESSENGER, which has orbited Mercury for four years, finally ran out of fuel and crashed into the planet at 17:26 UT on Thursday, April 30, 2015. The impact happened out of sight of Earth, with MESSENGER occulted by Mercury; we knew it was gone when it failed to reestablish contact with the Deep Space Network a few minutes later.

Well I guess it is time to say goodbye to all my friends, family, support team. I will be making my final impact very soon.

MESSENGER was just a robot, an inanimate object; but its human operators and fans were full of emotion yesterday as we stood vigil over its final moments. I watched, as I do, on Twitter. Some people responded to the emotional moment with jokes:

Mary Kerrigan, noting that MESSENGER was crashing near the Mercury crater named for Shakespeare, looked for inspiration from the Bard.

@MazieK @HollowCrownFans @MESSENGER2011 The strong-wing’d Mercury should fetch thee up, And set thee by Jove’s side.

And fall upon the ground, as I do now, Taking the measure of an unmade grave - R&J A3s3 #MESSENGER #Shakespeare pic.twitter.com/gx7DCyYzfg

The yellows blues The purple violets & marigolds Shall as a carpet hang upon thy grave-P A4s1 #MESSENGER #Shakespeare pic.twitter.com/R5dulkCHGP

Many, many people just watched, no doubt feeling lots of different things.

MESSENGER is at aphermion, speeding up towards Mercury for the last time. Sad day, but grateful for @MESSENGER2011 pic.twitter.com/hiR16rvv79

May the rest go peacefully my friend, @MESSENGER2011 pic.twitter.com/OAvs2SUjEb

Final LOS for Messenger prior to Mercury impact... pic.twitter.com/pznqPqlCZp

MESSENGER was doing science to the very end....

Every second MESSENGER is talking to the Goldstone DSN station we are getting new science at Mercury. #totheend

...and even doing science that would never be returned to Earth.

@kotsuki_chan @elakdawalla @hauck As follow-on. At impact, the laser altimeter was firing, and at least one spectrometer was integrating.

And then it was over. The Deep Space Network antenna at Goldstone listened for MESSENGER to re-emerge from behind Mercury, and it didn't.

It's official. MESSENGER orbital operations have ended, the spacecraft signal was not reacquired. #thatsmessenger

To: @MESSENGER2011 So long & thanks for all the science From: Your friends in #DSN mission control pic.twitter.com/O5dDgxE58x

But it wasn't completely over. The Deep Space Network station at Canberra kept listening for MESSENGER, just in case. The tracking pass had been scheduled before the final date of MESSENGER's demise was known, and they kept the scheduled pass because of their usual thoroughness. 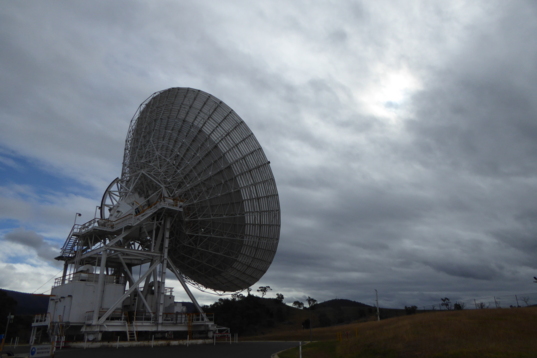 DSS-45 is a 34-meter antenna that was built in 1986 for the Voyager 2 flyby of Uranus. In this photo, taken on the morning of May 1, 2015 (local time), it is listening for a signal from MESSENGER, which had crashed into Mercury the day before.

At first, I found myself at a loss for what to say or think. I had a momentary feeling that the whole mission had never happened. If a spacecraft crashes on a distant planet and there's no human there to hear it, does it make a sound? I had imagined it there at Mercury for so long, and then it didn't exist anymore; I had the disconcerting feeling that I'd imagined it right out of existence. But Sarah Hörst brought me back to Earth with this crucial point:

Indeed, there are lots of space robot people who still have work to do with all the data that MESSENGER returned, down to the last moment.

In space, no one can hear you crash. Goodnight @Messenger2014 pic.twitter.com/RhBWcFS3iF

Shortly after issuing the press release summarizing the spacecraft's death, the MESSENGER mission -- which will continue on Earth, at least, for at least a year or so, as they archive data -- gave us MESSENGER's final image.

And of course there will be another Mercury mission that will allow us puny humans to take the science further, building on what MESSENGER sent us, and Mariner 10 before it.

Farewell, MESSENGER. You did good.

My little @MESSENGER2011 spacecraft will be keeping me company the next couple weeks as we watch the mission end. pic.twitter.com/jrOyP43wXj 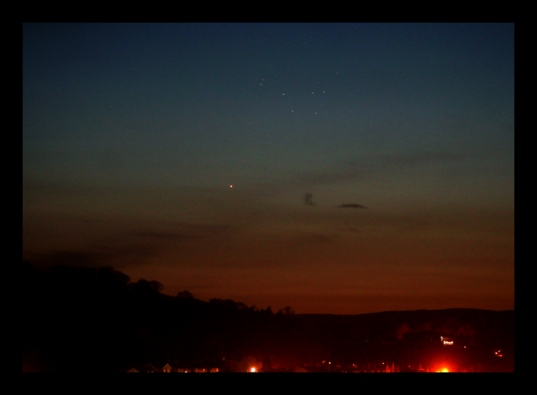 A look toward the innermost planet, on the day that its first orbiter crashed to ground.

I am sad the mission is over, however, as a long time Planetary Society member, I am happy since I had the opportunity to name one of its craters: "Rivera Crater". My proposal to honor Diego Rivera was selected this week.

Well, what can I say, MESSENGER? You were good to the very last drop -- and then some, quite literally! Rest In Peace. R.I.P. MESSENGER.

Decaying orbits were popular dramatic props in Star Trek. Residual atmospheric drag does bring Earth satellites down over several years, but Mercury has no atmosphere to speak of. Q: What set of influences brought Messenger low?

Well. Without fuel (first, the onboard hydrazine was spent; and then the helium used to stabilize it), MESSENGER's orbit was decaying (i.e., gradually spiraling in towards Mercury's surface, for lack of any fuel whatsoever to slow it down, or raise the orbit any longer). Impact was only a matter of time; at least the scientists were at least able to postpone it till the end of the month (4/30/2015), as well as to calculate the impact's exact time. And, who knows? ESA's BepiColombo mission (in 2024?) just might be treated to finding a new crater in Mercury's mid-northern terrain (MESSENGER's gravesite -- R.I.P.)!

My understanding is that it is the non-uniform gravity of Mercury, and the effect of solar wind and radiation pressure, that made MESSENGER's orbit unstable.