Now that Cassini has returned to Saturn's equatorial plane, it has lots of opportunities to observe Saturn's moons. For about a week, Cassini has been taking regular sets of images of Iapetus, the walnut-shaped yin-yang moon that is Saturn's third largest. It's the first time that Cassini has gotten a really good look at Iapetus' north pole, so these images will fill in some gaps in our maps. But the main reason I care about Iapetus imaging is that the images are so fun to process into color, since Iapetus is among the most colorful things in the Saturn system.

In all, Cassini took 33 sets of photos. At the far end of its elliptical orbit, Cassini moves slowly and more or less matches pace with Iapetus, so Cassini was able to take images from about the same distance -- about a million kilometers -- for a whole week. Cassini's perspective shifted slightly during that time and Iapetus' appearance shifted from nearly full to a gibbous phase. The line separating Iapetus' bright and dark terrain makes Iapetus appear more flattened than it actually is; horizontal stripes make planetary bodies look fat, too! 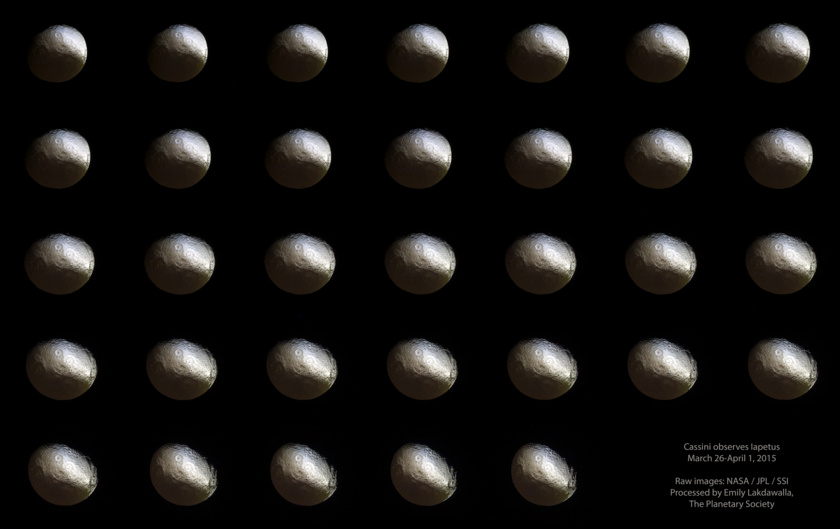 Since I had so many images, how could I not make an animation? This animation bounces back and forth so you can watch how features change as Iapetus rotates.

Iapetus isn't the only thing Cassini has imaged recently. Here's a gorgeous conjunction of Titan, Rhea, and Mimas, although Mimas is nearly invisible. 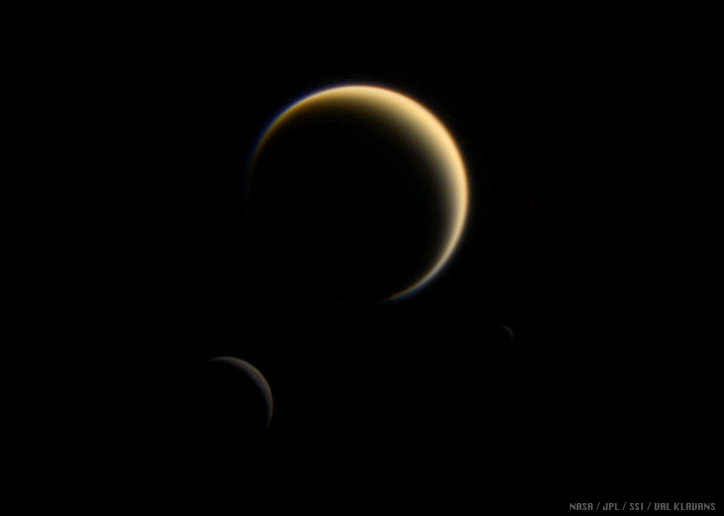 On 25 March 2015, the Cassini spacecraft captured three of Saturn's moons in the same shot. From left to right: Rhea, Titan, and Mimas. (Mimas is barely visible below and to the right of Titan.)

These two images of Saturn illustrate how Cassini's orbital perspective shifted from one that looks down on the rings to one in the plane of the rings. In the first one, notice that you can see all of Saturn's shadow on the rings; summer in the north pole has advanced far enough that Saturn's shadow is getting quite short, and it now looks more like it did when Cassini entered orbit 11 Earth years ago. In the second one, the rings have collapsed into a thin line, though they still make their presence felt by reflecting light onto Saturn's night side. 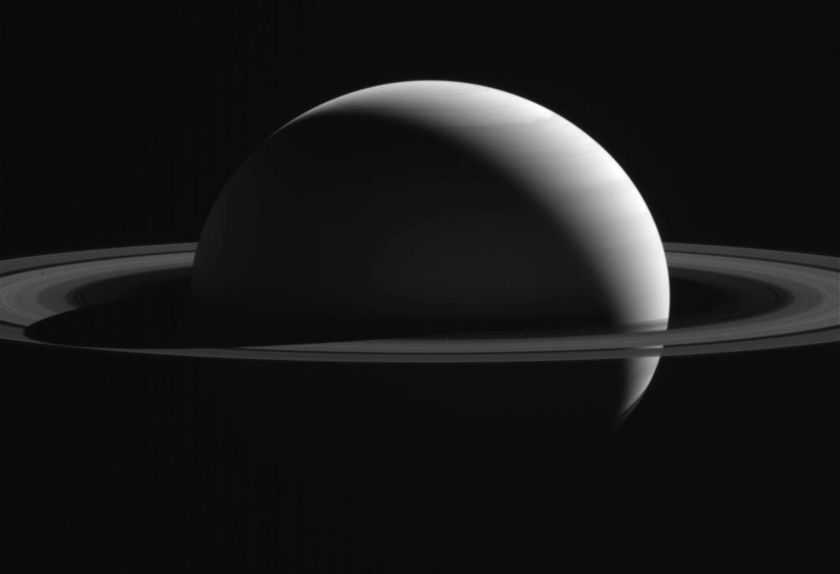 Cassini took this photo of Saturn while it was near apoapsis. The inclination of the orbit is about 8 degrees, so we see the rings at a low angle. 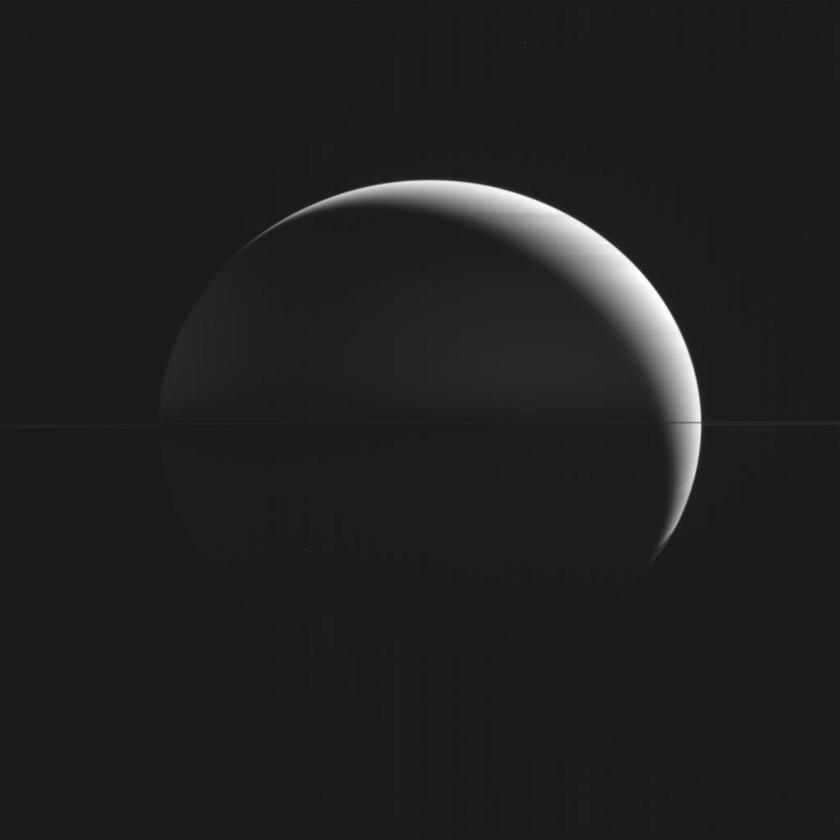 Cassini took this photo of Saturn on March 25, 2015, while it was near apoapsis. The inclination of the orbit is about 0 degrees -- that is, Cassini's orbit is coplanar with the rings. The rings appear only as a very thin line.

Finally, there is this fun animation on the E ring, which I believe includes Enceladus zipping around it toward the end. You can see stars shifting in the background, and a lot of noise from cosmic ray hits and hot pixels on the camera detector, as well as stray light from the Sun, which is not far out of the frame.

Animation of the E ring

An animation of 24 images of Saturn's E ring captured on March 23, 2015. With the Sun nearly in front of the spacecraft, Cassini is able to see the E ring quite clearly from the way its dust scatters sunlight.

The Cassini imaging team has been having fun with their new images, too; they just released this lovely processed mosaic of Rhea from the recent Rhea flyby. 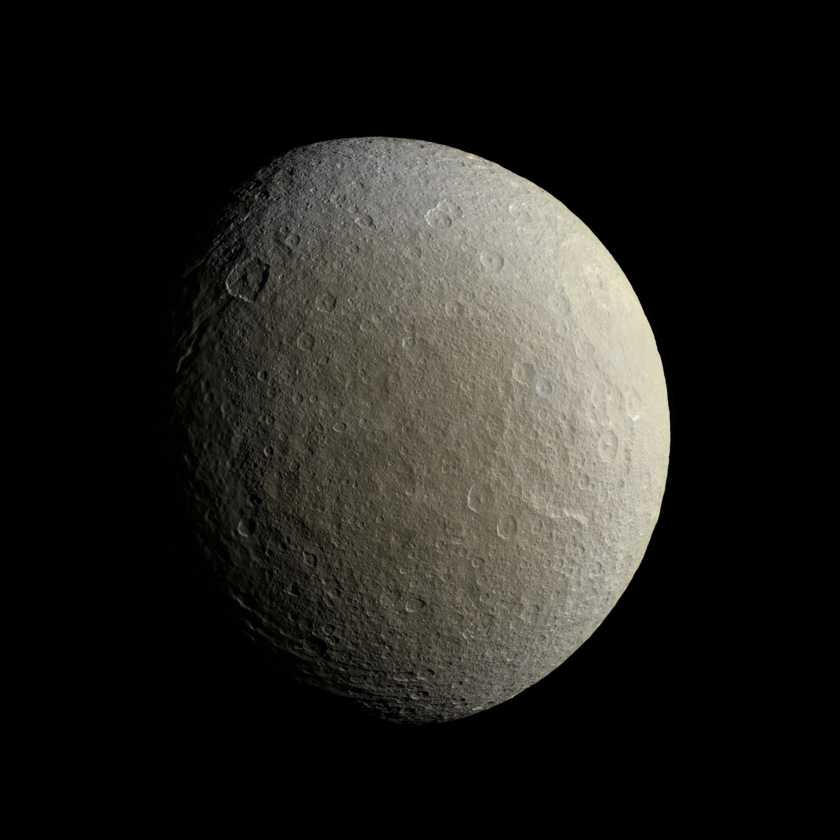 Images taken using clear, green, infrared and ultraviolet spectral filters were combined to create these enhanced color views, which offer an expanded range of the colors visible to human eyes in order to highlight subtle color differences across Rhea's surface. The moon's surface is fairly uniform in natural color. It was taken on 9 February 2015 and is centered at 21 degrees north latitude, 229 degrees west longitude. Resolution in this mosaic is 450 meters per pixel. The images were acquired at a distance that ranged from about 82,100 to 74,600 kilometers from Rhea.

And I just got an email notification that a pile of Cassini images taken between April 1 and July 31, 2014 has been released to the Planetary Data System! I'll be watching the Rings Node's blog to learn when they get ingested into their search tool so I can go download and play with the latest high-quality data.

Interesting view, love the cassini mission, in a few months they will be able to image North polar regions of Dione and Enceladus, should be interesting to see if any signs of previous activity, especially Enceladus

the images are next level! thanks emily.

Great work Emily! Thank you! ...for fun - your movie shows a nice smiley face of Iaeptus! I usually can't see these imaginary features.

That E-Ring animation is fascinating. I'm just deciding that the white dot *is* Enceladus - which is my favourite moon ;) Thanks for this!