On February 9, Cassini's trajectory took it within 47,000 kilometers of Rhea. During the encounter Cassini acquired two very large mosaics on a gibbous Rhea, capturing its heavily cratered surface in beautiful detail. This is the first icy moon flyby of the second equatorial phase of the extended-extended mission. It is also the last close encounter that Cassini will ever have with Rhea. Now, we shouldn't be too sad about that, because of all of Saturn's non-Titan moons, Rhea is the one that Cassini has already done the best job of imaging. It's the second largest moon and since it is the one next closest to Saturn from Titan, Cassini's orbit has taken it relatively close to Rhea relatively frequently, providing plenty of imaging opportunities. I just searched, and there are already 5,219 images aimed at Rhea in the Cassini data archives, among them several big mosaics shot during similarly close encounters. Still, it's sad to know that we've now left Rhea behind for good.

To better understand the data that Cassini gathered during the most recent flyby, I sorted it all out into a single image. You can see that there are three global views from the wide-angle camera, and two large mosaics. The wide-angle views were shot only using a clear filter. The mosaics were shot at full resolution through a clear filter, then at half-resolution through ultraviolet, green, and infrared filters. A small area near Rhea's equator was imaged using two more filters, a longer-wavelength infrared and a blue filter, because there is an especially colorful feature there of interest to scientists.

What can you do with these pictures? Glen Nagle threw the three wide-angle views together into a simple animation, showing Cassini's point of view on Rhea shifting as it flew past the moon.

Rhea, back and forth

Cassini captured the three images for this animation through its wide-angle camera on February 9, 2015.

The mosaics are daunting. With a little bit of help from Microsoft Image Composite Editor I assembled the smaller of the two. I had to fudge the upper right edge of the disk a little bit because Cassini's point of view had shifted considerably in the time separating the two frames that meet there. But I think it looks pretty good. 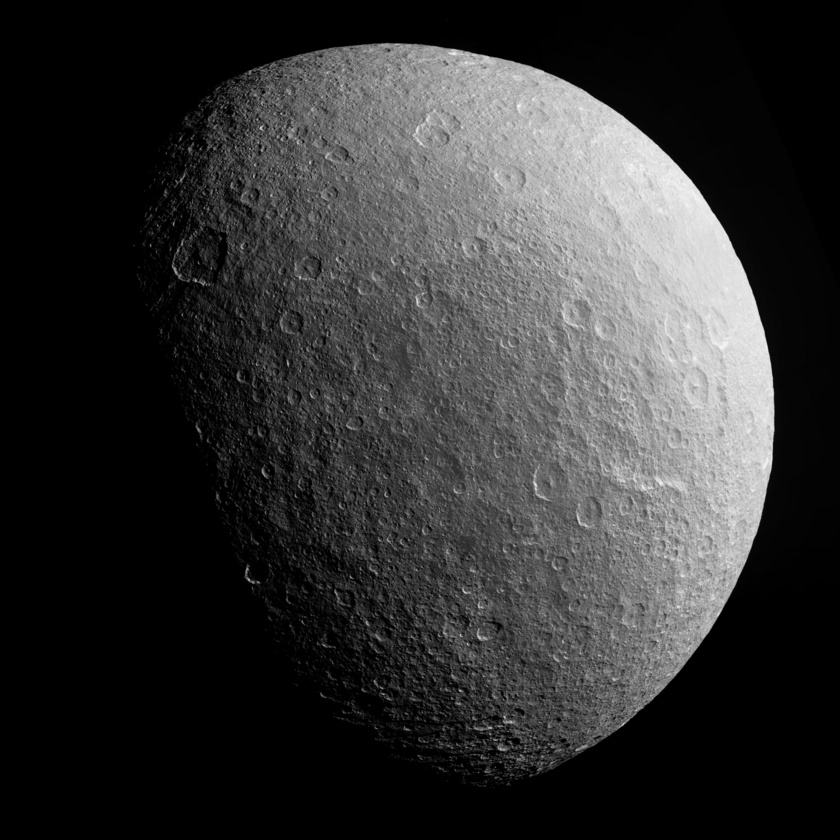 Cassini captured the 11 images used to assemble this mosaic on Rhea on 9 February 2015. It has been oriented so that north is up. The view includes some areas near Rhea's north pole that Cassini has not previously imaged at high resolution. The irregularly shaped crater near the terminator in the north is named Wakonda.

This mosaic could be assembled in color -- you'd have to make the color composites of the ultraviolet, green, and infrared filter images, and then overlay it on the higher-resolution clear-filter data, and then mosaic the eleven frames together. I didn't try; I figure it's not worth the effort until I can get my hands on the archival science data in a year or so. Fortunately, there are professionals working on that challenge; Jason Perry (who works for the Cassini imaging team) said on Twitter that he was working on the larger of the two mosaics, and will probably eventually assemble it in color. I look forward to seeing it!

That's very impressive imaging work to show the moon in the level of detail seen!

The Rev 212 edition in the Ciclops website "Looking Ahead" section shows a simulated view of Rhea during this encounter. What is notable is an obvious blank spot on the mapped globe which these new images fill. This is a huge achievement in totally mapping this moon. Congraduations to the Cassini imaging team! Thank you Emily, excellent post!

Another great blog, cassini still producing really exciting stuff. Interesting flyby of dione in a few months, may get data on possible internal ocean, past or present, enceladus encounter a little later, anyone know if it may add anything radically different on the Plumes?

Too bad Hyperion is out of reach because of its great distance from Saturn. The only known moon in the solar system which is not gravitationally locked to its host planet. And weird in several ways. About time to plan next mission to Saturn.

I don't understand why Hyperion is "out of reach because of its great distance from Saturn". It's orbit is just outside Titans (1,4 mill. km vs Titans 1,2 mill. km). I too would like to see more Hyperion flyby's, don't get me wrong.