The Dawn mission released new images of Ceres yesterday, taken on February 4, when Dawn had approached to within 145,000 kilometers. I would like to pause for a moment here to express my thanks and appreciation to the Dawn Framing Camera team for being so forthcoming with these images, to allow the whole rest of the world to look over their collective shoulders and allow us to gaze with them, for the first time, onto a huge, previously unexplored world. That didn't happen at Vesta; I'm so, so glad it's happening at Ceres.

Here's an original photo, as the pixels came down from the spacecraft. There's still a whole lot of camera frame to fill -- but I like all that black space as a reminder of how much more detail is yet to come! Ceres occupies just a bit more than 70 pixels of the 1024-pixel-wide field of view. By the end of February, Ceres will appear a bit more than 250 pixels wide, but Dawn will be seeing more and more of a crescent phase as it proceeds toward Ceres' night side. (For more information on Dawn's future imaging plans, check the table in Marc Rayman's most recent blog entry.) 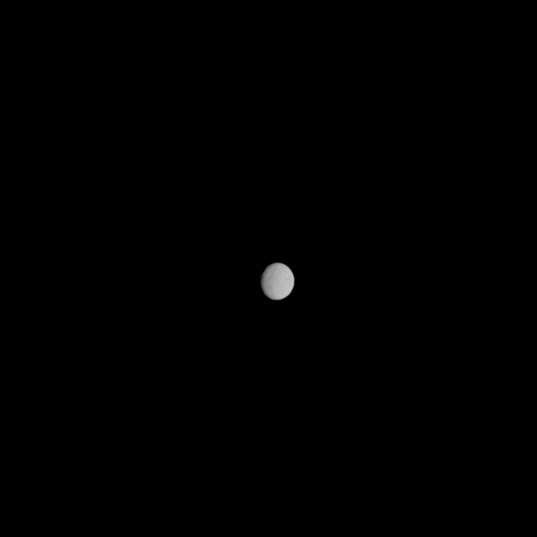 One image from Dawn's third optical navigation sequence on Ceres, taken on February 4, 2015 from a distance of 147,000 kilometers. North is to the right.

This being the fourth observation that the Dawn team has released on Ceres approach, I thought it was more than time to show how Ceres grew in the field of view. That white spot is still teasing us. Unlike some other versions of all of these images that you will see floating around the Internet, what you see below are the actual size, in pixels, of the images that were returned from the spacecraft. That's all the data we have to work with. For now.

They also released an animation of Ceres rotating, and this one covers more of Ceres than any of the previous ones. As before, Dawn is looking up at Ceres from the south. More details are coming into view, and they're fascinating. For one thing, there's not just one white spot any more: there are several. A couple of them seem to be surrounded by a splash of bright material, so I will assume until proven otherwise that they are impact craters, fresh enough to have rays. There is one row of three white dots that reminds me of the alignment of the Tharsis montes on Mars, or maybe Orion's belt. I see what looks like a bright dot within one of what I have been assuming are two impact basins near the south. Just as intriguing as the bright spots are some darker areas coming into view. In the south, you can see shadows shift as Ceres rotates, outlining circular impact craters, one of which has a central peak. But there are other darker areas that don't seem to be shadow-related. A varicolored surface bodes well for interesting geology to interpret, once we get closer. (The animation below has been updated with one released February 10 by MPS.)

This animation consists of 20 individual frames shot as part of Dawn's third optical navigation campaign on approach to Ceres. The images have been enlarged from the original size by a factor of five, and contrast enhanced to bring out more detail.

Dawn will take its next set of images on February 12: the first "Rotation Characterization," with images 121 pixels across, nearly 100% illuminated. With the illumination nearly straight behind Dawn, we won't see much in the way of shadow to define topography, and it will be difficult to determine what the patterns of bright and dark mean. Still, I can't wait!

Neither can asteroid enthusiasts. Even though he knew much better pictures will be coming, mini-world mapper extraordinaire Phil Stooke could not resist turning the animation above into a global map. Squint and you can see shapes, but your guess is as good as mine as to what they are. Here be dragons -- but not for much longer! 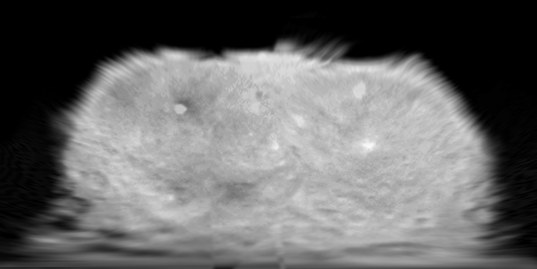 Awesome! A very minor note, while you credit Phil Stooke under his picture, his name doesn't seem to have made it into the text, unless he is going by "mini-world mapper extraordinaire" these days, which would certainly be reasonable.

Thaks a lot, Emily for your presentation ! What a great difference between quick NASA releases (Dawn, New Horizons) compared to the Rosetta OSIRIS comet pictures, that people (and also scientists !) will see in a so distant future that no one will be more interested !!

What a great mission, can't wait for the detailed stuff in April, then we're on to new horizons at Pluto, that may be even more interesting. Hope they do find some plume activity at ceres, apparently the early RC3 orbit may be best for observing this, that would be really interesting

The "cylindrical Map" looks like a cartoon pussycat by Saul Steinburg. Might the white spots be giant guysers?

I am changing my guess for what the great white spot is. Now I think it is a frozen lake of ice. After a sufficiently large impact, surrounding water melts and fills the impact basin and then quickly freezes. Now the lake is slowly sublimating into space. That is why it looks like it might be a lower elevation. The other spots are the same.

@ethanol: D'oh! Fixed. Thanks for pointing that out.

Emily, in the top image and in a number of the previous framing camera shots I've been noticing the presence of a spot of low brightness that shows up when the gamma is increased. In the above shot the more prominent of the two 'objects' appears to have a distinctive irregular shape. Have you heard from anyone about whether that's an image artifact? It doesn't look like a cosmic ray blemish, but we know how those often make odd marks. At this early stage even with this image I'd hate to suggest its barely-resolved appearance seems consistent with a small very dark satellite companion of Ceres, but its a possibility that might be floated until someone is able to confirm it as an artifact or can demonstrate its in object in orbit around Ceres. Also, noticing tantalizing indications of trough-like features on the surface, but, you know, canali on Mars, etc. Nothing like a new world looming into clarity for the first time in history. :)

Pardon, I meant to say that "the mo[st] prominent of the six 'objects' [spots in the frame] appears to have a distinctive irregular shape."