An extended mission for LADEE

From the start, the LADEE team has said that the peculiar circumstances of their mission's operational plan at the Moon left little possibility for an extended mission. It's a very small spacecraft flying in a very low orbit over a body whose gravitational field is notoriously lumpy. It takes regular rocket firings to maintain an orbit, and LADEE was too small to carry much fuel. But it seems that they've managed to be frugal enough to eke out a one-month mission extension on their three-month prime mission. They now plan to impact the Moon "on or around April 21, 2014." They announced the extension on Friday afternoon. 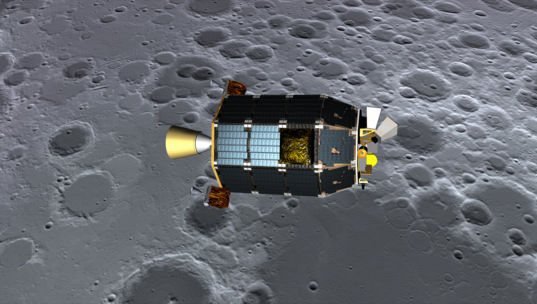 LADEE above the lunar surface

What does a one-month mission extension get them? They get to operate in a lower orbit. The press release wasn't specific about how low that was, so I asked the question of LADEE project scientist Richard Elphic. He answered:

We will be taking LADEE from its nominal 20 to 50 kilometer periapsis right down to the treetops -- we want to get data from 5 kilometers or even less.  So far we've been keeping a healthy margin for spacecraft safety, but after the nominal mission is completed, we will relax those requirements in the interest of new science.

LADEE is a mission to explore the Moon's atmosphere and its dust environment. Both of those will be denser closer to the Moon. How much denser? Elphic answered:

The density depends on the species. For instance, argon-40 is heavier than neon-20, and has a lower scale height. That means we should see a big increase in argon compared to neon. And we may see the heavier species for the first time at these really low altitudes. It's remotely possible we'll see krypton, for instance.  But the real boon will be in the dust measurements. LDEX will be measuring dust densities very close to the surface, and we will see if something new shows up. Each time we've dropped our orbit down to lower altitudes, we've been surprised by new things.

"Scale height" is a quantity atmospheric scientists use to describe the exponential decay in abundance of an atmospheric gas with altitude. The scale height is the altitude change it takes for the abundance to decrease by a factor of e.

Shortly after they posted the announcement of the mission extension, the LADEE mission also posted an informative update from Elphic on science from the mission; here's the full text of that.

On Sunday, Jan. 5, 2014, NASA's Lunar Atmosphere and Dust Environment Explorer (LADEE) passed a milestone: 1,000 lunar orbits. The spacecraft has traveled more than 10.4 million miles (17.4 million kilometers) in its journey from Earth to the moon. LADEE continues to perform splendidly. And on Wednesday, Jan. 15, orbital colleague Lunar Reconnaissance Orbiter (LRO) snapped LADEE’s picture. Then in the evening of Sunday, Jan. 19, LADEE executed a near-perfect periapsis-raising maneuver, one of a series of maneuvers designed to maintain LADEE’s science orbit within the desired altitude range. Without these maneuvers, LADEE’s orbit would decay in a matter of days, resulting in premature impact on the lunar surface. Such is life when you fly low over the lunar tropics! Fortunately, LADEE’s propulsion and guidance systems have performed exceptionally well.

The LADEE science team continued to analyze data acquired at the exciting time of the Chang'e 3 landing on Dec. 14, 2013, and the remarkable feat of quickly deploying and operating its Yutu rover. Along with many others, we wondered why there was no obvious signature of the descent and landing in either gas or ejected dust, which LADEE is equipped to measure. The instrument teams had carefully planned activities to provide a “before and after” set of measurements, so we could see if anything had changed, even temporarily. At first glance, nothing stood out. Now, it seems, something may be emerging from the data after all – but the story is complicated.

In studying their data from the time of the Chang’e 3 descent operations, the Lunar Dust Experiment (LDEX) team at Laboratory for Atmospheric and Space Physics, University of Colorado at Boulder noted an increase in the recorded dust impact rate around the time of the landing. However, the rise preceded the landing time by many hours, suggesting a different origin. Indeed, as often happens in space exploration multiple events collided: the Geminid meteor shower coincided with this landing event and produced elevated dust counts before, during and after the landing period! The LDEX dust impacts are thought to be due to the ejecta, or spray, of particles that result when the Geminid meteoroids slam into the lunar surface. If LDEX did encounter any lunar soil particles thrown up by the final descent of Chang’e 3, they would have been lost in the background of Geminid-produced events. LDEX would have to be very lucky to see these blasted regolith grains, because the descent engine interaction with the landing site soil lasted only a few tens of seconds at most. It’s quite likely that LADEE was simply not in the right place at the right time. But that’s just part of the story.

The Neutral Mass Spectrometer (NMS) team at NASA’s Goddard Space Flight Center, Greenbelt, Md., has been searching the data for exhaust species such as water (H2O), carbon monoxide and carbon dioxide (CO and CO2) as well as nitrogen (N2). They found there is a difference between what NMS observed before the Geminids shower and Chang’e 3 landing, and what was observed after. The results are very preliminary and require further study, but could be very exciting. Stay tuned!

The Ultraviolet and Visible light Spectrometer (UVS) carried out a series of before/after observations looking for effects of both the landing and meteor showers. Analysis by the UVS team at NASA's Ames Research Center in Moffett Field, Calif., revealed an increase in sodium in the exosphere in connection with the Geminids, as well as evidence of increased light scattering due to dust. The UVS also has been monitoring emission lines of atomic oxygen, and has seen emissions that may indicate the presence of both iron and titanium in the lunar exosphere. As constituents of the lunar regolith, we expected these elements to contribute in minor amounts to the lunar exosphere, but they have never before been observed.

All of this may say something important about both the persistence of a temporary lunar volatile exosphere and how species migrate across the lunar surface. One pathway for populating the lunar polar cold traps is via the moon’s tenuous exosphere: water molecules may hop across the lunar surface, and some may randomly find their way to the polar cold traps. But the effectiveness of the transport process depends on the extent to which a molecule “sticks” to surface grains. Such molecular stickiness depends on multiple factors – many of them are still unknown. The Geminid effect and the Chang’e 3 landing may afford us an opportunity to determine how “sticky” the lunar surface is for hopping water.

The LADEE science team continues to analyze the data from the Chang’e 3 landing, episodic meteoroid showers and repeating variations as the moon goes through its phases. More surprises likely await us!

"We will be taking LADEE from its nominal 20 to 50 kilometer periapsis right down to the treetops"... I didn't kow there were trees on the Moon, did you, Emily? ;-)

iron and titanium dust from an impact ! the time it takes to clear, should show if formed hydryoxl and/or wind can stick around long enough to bind into the microsites on the dust, to form molec water.. Wonder if they will image any grapite too ? Fantastic timing folks !