Many developing space missions achieved milestones while I was in Darmstadt covering the landing of Philae and too busy to write about anything other than Rosetta. One of these was InSight, NASA's geophysical Mars lander. InSight entered the Assembly, Testing, and Launch Operations phase of its mission last month. Acronym-happy engineers refer to this as ATLO, of course. (Pronounce it "at-low.") This is when the whole plan comes together -- when parts and instruments from all over the world are delivered to a clean room where they're cleaned, tested, shaken, tested, baked, tested, assembled, tested, dissassembled, tested, cleaned, assembled, and on and on. Somehow at the end of it they will have produced a spacecraft that can survive riding into space atop an enormous firework; being alternately chilled and roasted during a year-long journey to Mars; land on another planet; and then do exquisitely detailed scientific observations with highly sensitive instruments.

With the announcement came a photo of InSight at the beginning of ATLO. This is like a spacecraft baby picture -- all her adult parts haven't grown in yet! She's just a hexagon of honeycomb material with a few spherical tanks suspended below right now -- there's a lot of work yet to do to get her ready for launch. 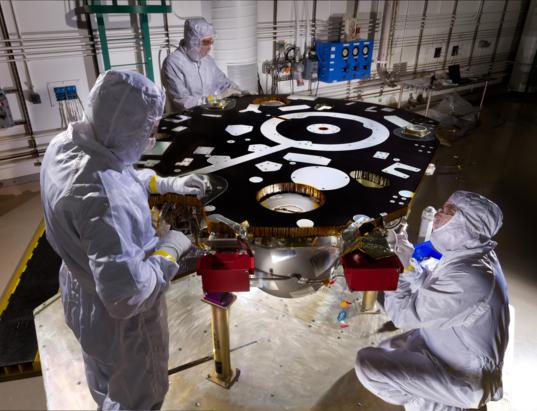 Lockheed Martin engineers work on the honeycomb structure that forms InSight's deck, preparing it for propulsion proof and leak testing. InSight aims at a March 2016 launch.

Question will you be sending names on insight