Last night was an exciting one on Twitter as I watched with the rest of the world while Hayabusa2 and a fleet of mini-satellites launched on an H-IIA rocket. Here is an artist's concept: 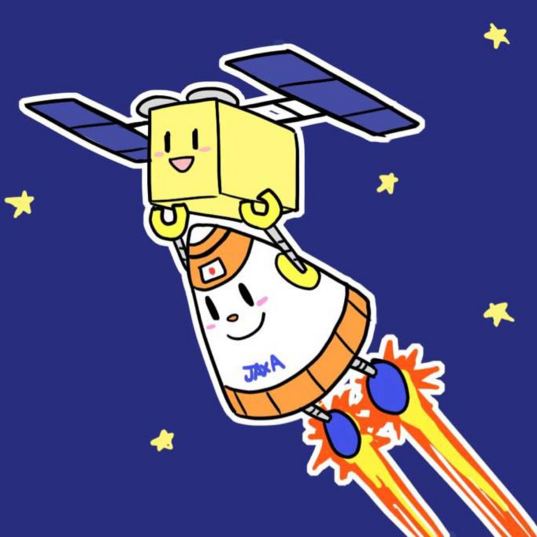 (I love JAXA's cartoon depictions of their missions.)

Tanegashima is arguably the world's prettiest space center, made better by the awesome sight of the rocket arcing up into a cloudy sky, its solid rocket boosters separating cleanly just minutes after launch. Watch the replay here -- liftoff occurs at about 1:09:40:

The broadcast includes rocketcam views of the solid boosters falling away at about 1:17:05. But right after that comes an amazing video that I don't recall seeing before: a camera mounted inside the fairing documents the splitting and separation of the rocket's nosecone, exposing Hayabusa2 to space for the first time. It was so great I had to clip it out of the broadcast and post it separately:

Minutes after launch on December 3, 2014, a camera mounted to Hayabusa2's upper stage captured video of the fairing (the rocket's nosecone) splitting open, exposing Hayabusa2 to space for the first time.

There was a cruise phase of about an hour and a half before a second firing of the second stage rocket would place Hayabusa2 onto an interplanetary trajectory. While this kind of launch-coast-boost plan is routine on NASA missions, JAXA has not done it before. They modified the second stage slightly, painting the usually orange surface with reflective white paint to prevent its stored liquid hydrogen from heating up during the coast. The second firing of the second stage happened as planned, and then we were treated to video of Hayabusa separating. The little semicircle of white dots are the five target markers, which Hayabusa 2 will use to help guide its descent to the surface of 1999 JU3.

An hour and 47 minutes after launch, Hayabusa2 departs Earth for its journey to asteroid 1999 JU3, in a video recorded by a camera mounted to the second stage rocket. (The video lasts only 3 seconds, then is still for 5 seconds.)

Since the launch, JAXA has posted two press releases, confirming that everything went according to plan. Here is the first, which also contains a timeline of the actual launch events:

Mitsubishi Heavy Industries, Ltd. and the Japan Aerospace Exploration Agency (JAXA) successfully launched the H-IIA Launch Vehicle No. 26 (H-IIA F26) with the Asteroid Explorer “Hayabusa2” onboard at 1:22:04 p.m. on December 3, 2014 (Japan Standard Time, JST) from the Tanegashima Space Center. The launch vehicle flew as planned, and at approximately one hour, 47 minutes and 21 seconds after liftoff, the separation of the Hayabusa2 to earth-escape trajectory was confirmed.

The second release, confirms that Hayabusa2 is power-positive and that itss trajectory is correct:

The Japan Aerospace Exploration Agency (JAXA) received signals from the Asteroid Explorer "Hayabusa2" at 3:44 p.m. on December 3, 2014 (Japan Standard Time) at the NASA Goldstone Deep Space Communication Complex (in California) and confirmed that its initial sequence of operations including the solar array paddle deployment and sun acquisition control have been performed normally. The Hayabusa2 was launched on the H-IIA Launch Vehicle No. 26 from the Tanegashima Space Center at 1:22:04 p.m.on the same day (JST.) The explorer is also confirmed to be inserted into the scheduled orbit by the H-IIA F26. The explorer is now in a stable condition.

There were three mini-satellites onboard the same launch vehicle. ARTSAT has posted to its Facebook page that they are receiving telemetry. I don't currently have information on PROCYON or Shin-en deployments -- I'll keep looking and update this when I find it.

In the time between launch and departure, I whiled away the time on Twitter, enjoying the excitement about Hayabusa2. I particularly enjoy the way that enthusiasm for space exploration manifests itself in Japanese popular culture. Here are just a few of the great space-fan-produced creative responses to Hayabusa2 that I saw last night:

I for one am excited about Hayabusa 2's upcoming asteroid landing in 2018! Such an opportunity to compare and contrast asteroids and comets seems so apropos in light of the data captured by Rosetta regarding the heavy deuterium in 67P's coma, and the new speculations regarding the water content of asteroids. The harsh rock-like appearance of 67P would seem more fitting on an asteroid, wouldn’t it?! And how curious that the center of 67P's orbital ellipse almost appears to be within the asteroid belt: http://i.dailymail.co.uk/i/pix/2014/08/11/article-2721752-204D41B900000578-773_634x616.jpg

The whole nation of Japan has good reasons to be excited about the Hyabusa 2 mission and indeed its great to see its citizens so heartily enthused about space science, and especially for unmanned space missions. The USA citizenry should be envious of the Japanese peoples support for spaceflight. They seem to excel in building and operating quite sophisticated probes and I think they learned a lot from the 1st Hyabusa mission, which initially was supposed to carry a NASA-built rover/lander but ended up sending along a pocket-sized hopper/lander that missed the landing target and tumbled into space. Agree with you PHILADELPHIAC - In the wake of the ROSETTA mission findings and the rapid blurring of theoretical distinctions between comets and asteroids, we desperately need hard material evidence to shed light on some of the toughest questions such is where did all the water on earth come from? The entire human race has a lot riding on the Hyabusa 2 mission to get good samples returned to earth for some robust testing of materials. Best wishes to you Hyabusa 2, and may the force(s) be with you !!

Hi CosmosQuest, Although comets are seeming like a less likely source of water, and we have to wait till 2018 for our next up-close examination of an asteroid, some other recent discoveries may redirect the search for the source of water towards the largest object in the solar system rather than the smallest -- the sun! A paper published in "Astronomy & Astrophysics" in 2011 detailed observations of a young sun-like star inundating interstellar space with water: http://news.nationalgeographic.com/news/2011/06/110613-space-science-star-water-bullets-kristensen/ More recently, earlier this year it was suggested that water on the moon came from the solar wind, i.e., from the sun: http://www.space.com/27377-moon-water-origin-solar-wind.html Maybe I'm reaching here, but couldn't all the water hidden in Earth's mantle also have come from a stellar outburst? http://www.livescience.com/46292-hidden-ocean-locked-in-earth-mantle.html Time will tell :)

After reading that Nat Geo article on stellar water production, and the Space.com article on how the sun's solar wind ions electro-chemically manufacture water on the moon, I now see what you are driving at PHILAEPHILIAC. article excerpts: "Seven hundred and fifty light-years from Earth, a young, sunlike star has been found with jets that blast epic quantities of water into interstellar space, ....The discovery suggests that protostars may be seeding the universe with water." and "Water trapped in rocks on the moon's surface probably originated mostly from streams of energetic particles blasted from the sun........" So what you seem to be suggesting is that all the recent phrenzy of discussion about whether it's comets or asteroids that seeded the young earth with water may all be misdirected musings if water production is intrinsic to stellar/planetary system formation. I see what you're saying PHILAEPHILIAC. And I think anyone reading this blog can see the obvious implications this has for the coming demise of the Whipple dirty-ice-ball and Oort-cloud-origins of present day comet theory. After all, as we can plainly see for ourselves with our own eyes comet 67/P possesses no water-ice because it's basically silicate ROCK, as Eric Hand - probably at Emily L's suggestion - so boldly pointed out at last months ESA conference.