Update 09:15 UTC: Just a few minutes ago, ESA confirmed that Philae has successfully separated from the orbiter. It will now take 7 hours for the spacecraft to descend to the comet. In a few hours, Rosetta should relay a "farewell" image taken by the lander.

Philae is "go" for landing. But there has been drama overnight. One of the steps to prepare for landing did not proceed as planned. A cold-gas jet -- a nitrogen thruster -- is supposed to fire upon landing in order to counteract any tendency for the lander to bounce off the surface. In order to prepare the thruster for use, a pin must puncture a wax seal over the gas reservoir. There were two redundant pins, and two efforts made to fire each of the two pins, but no pressure change happened after four attempts. Without the cold-gas system, Philae must rely on its two harpoons and ice screws to hold it to the surface. Whether that will be enough -- or whether the lander will bounce off before they can secure it to the surface -- remains to be seen.

There is an outside possibility that the problem is not with the pins but rather with the pressure transducers that are supposed to measure the pressure change, but mission manager Fred Jansen told me that wasn't very likely. This is not a unanimous opinion, however; apparently Paolo Ferri has told people that he thinks it's more likely a pressure transducer failure than a puncture failure. We'll see.

So why did they make the decision to go ahead and land? Because the likelihood of the pin-puncture succeeding after four failed attempts is less than 1%, Jansen told me. Delaying the landing wouldn't increase the likelihood of success (and might actually decrease it, because of the increasing activity of the comet), so they are "go" even without the cold-gas system.

I have been updating my timeline with the events as they have taken place, and I'll continue to do so all day.

And don't miss today's XKCD, which is an auto-refreshing, real-time cartoon of the comet adventure. (If you don't want to wait to see how the XKCD version of the story ends, go here.) 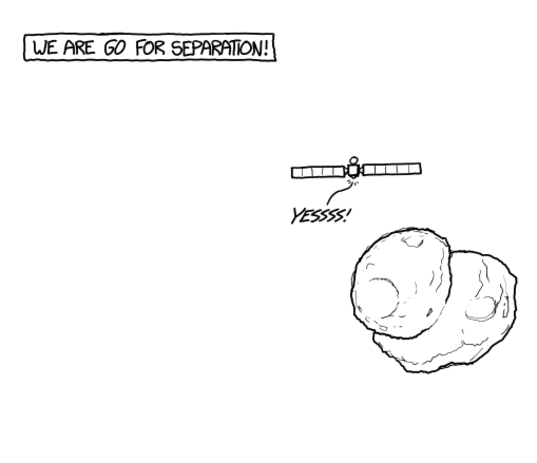 Emily we're all so proud of you over here in the United States. I've been following your work ever since the mid 2000 and this has got to be the most exciting Event you've ever been involved in. I very much appreciate that you're there to give us the play-by-play. Hoping for a fabulous success with the feeling a landing here in a few hours despite the thruster problem.

"The most exiting" I'm 100 % sure. Curiosity's landing should not be dismissed, or other events like Huygens landing on Titan, Cassini braking into Saturn's orbit etc. But even taking those into account, and if Emily was involved then (can' tremember) it should make her top 10 or even top 3 list, I guess :) In any case I'm glad I'm in the same time zone as mission control in Darmstadt :)

Emily, I heard a rumour that the Philae CIVA images are being passed around campus at MIT & JPL.....why no images yet here on your blog? Are the ESA people telling you to not distribute them yet? I can't believe you don't have them yet....your in the catbirds seat...please snd along as soon as you can. Thanks!