The nucleus of comet Siding Spring passes close by Mars on Sunday, October 19, at 18:27 UTC. Mars passes through the densest part of the comet's tail about 100 minutes later. All five orbiters at Mars will be in constant contact with the Madrid and then Goldstone Deep Space Network facilities, just to make sure they're okay. One-way light time to Mars right now is just under 14 minutes. There are tons and tons of scientific observations planned by Mars orbiters, Mars rovers, and Earth-based observatories. In fact, most of the facilities that are planning to observe Siding Spring have already begun their work, and will continue observation for days after the encounter. 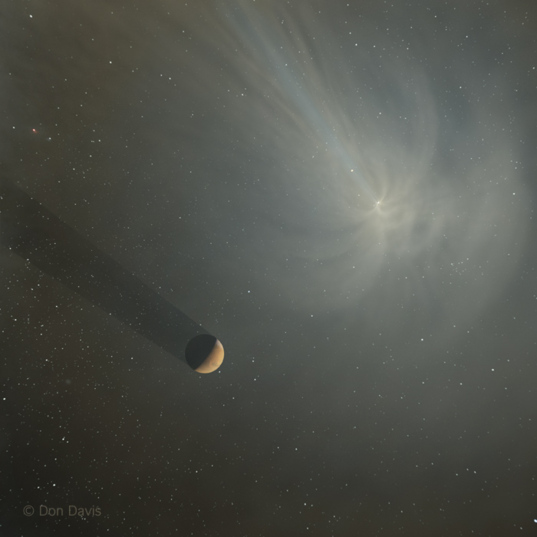 The coma of comet C/2013 A1 (Siding Spring) dwarfs the red planet as the two pass close by each other in this artist's concept.

What to expect on Sunday? It's not like a Mars landing; there won't be a single moment when a bunch of serious-looking engineers suddenly erupt into cheers. Instead, there'll be many smaller, non-televised moments as instrument teams receive their data from far-flung spacecraft and telescopes, spread out over the next several days. For the most part, the images of the comet won't be instant classics; many will show only a single pixel, or a faint smudge. Some of the data won't even arrive on Earth until the middle of next week. Most will require careful calibration and processing before they can be released, because they're being taken by spacecraft being used in unusual ways. None of them will look like the artist's visualization above. I will watch for images and post them over the coming week.

But the flyby is a big deal and I know people will want to follow it in real time, if only to be space fans enjoying a big space event at the same space time, so here are some suggestions for how you can do that. I will be checking in via Twitter over the weekend, and so will Bruce Betts; you can just follow us or try searching on the hashtags #MarsComet or #SidingSpring. And here are links to some webcasts and useful resources. I'll add more as I find them; please feel free to add links in the comments, too.

Here's a nice graphic of the separation between the comet and Mars at closest approach, by Adolf Schaller: 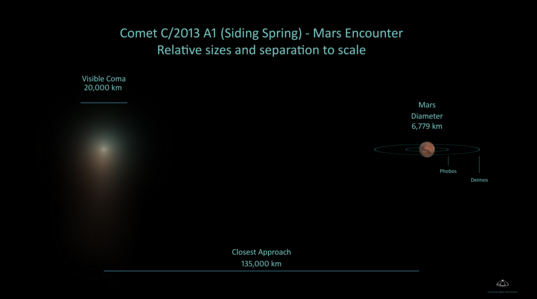 Separation between Comet C/2013 A1 Siding Spring and Mars during its October 19, 2014 flyby

Finally, I need to share a sad blog post I read today: the dark skies above Siding Spring observatory, where this and other comets were discovered, are under threat by development of coal seam gas mining in its vicinity:

As comet Siding Spring (C/2013 A1) passes Mars, comet discoverers with current or previous involvement with Siding Spring Observatory are concerned about the future of the Observatory. The viability of Siding Spring Observatory in Coonabarabran, NSW, Australia, is threatened due to the intention of Santos to develop industrial scale CSG (Coal Seam Gas) mining in its vicinity. The effect of light pollution from gas flaring and security and operational lighting, in addition to airborne dust and industrial contaminants, could threaten the dark sky status of Australia's largest optical observatory complex, the home to many Australian and International telescopes. Dust and pollutants in the atmosphere increase reflected light and can have a detrimental effect on telescope optics.

Hi Emily, I just wanted to make a correction regarding the timing of the Siding Spring encounter. The most recent orbit solution from JPL determined that the time of closest approach is slightly earlier than was previously calculated. It is now set at 18:27:31 UTC (with an 11 second uncertainty) as seen from Mars. As you note, because of light travel time, the time at which it would be seen here on Earth is 13 minutes and 32 seconds later, or 18:41:03 UTC. It's not a big difference, but since the most recent orbit looks great as far as predicting the comet's position, I thought I'd mention it.

The NASA and the ESA link are the same.

Hi Emily: How can we stop the sensationalising of this encounter in the media? All the illustrations I've seen - really without exception, including the one at the top of this article - grossly exaggerate either the size and apparent brightness of the comet or in some cases, the distance it will pass from Mars. I know you are aware of this, but really Planet Soc could help more to ensure the true sitation is highlighted. Another good example is the series of 'supermoons' this past summer. These full moons are not noticeably larger than normal for the man in the street, yet are portrayed as somehow almost filling the whole sky! Doesnt this constant exaggeration bring our hobby into disrupt?

Thanks for the corrections, Tony and stone! Mark: There's little the Society can do to stop sensationalization -- all we can do is to try to be a reliable source ourselves, and hope people find us.

a link from youtube, and a stacked image for an idea of coma diffusion http://www.youtube.com/watch?v=CzySD2g6AiE http://h.dropcanvas.com/0nctg/SidingSpringstacklabeled.jpg