Today the Mars Orbiter Mission released a nice four-image animation of teeny dark Phobos crossing Mars' huge orange disk. I made this animated GIF by taking screen-captures of the four different frames of a video that they released to Facebook -- not the cleanest path for acquiring spacecraft data. But this is the best I've been able to find on the Internet. Given the range at which the image sequence was taken (66,275 kilometers, very similar to this global view) the original four frames should've been able to contain all of Mars within their 2048-pixel-square frame, so we're seeing a subsampled view of the original data. Still, it's neat to see Phobos in motion.

An animation of four images of Mars taken by Mars Orbiter mission, showing Mars' moon Phobos crossing the disk at upper right. The images were taken from a distance of 66,275 kilometers in October, 2014.

Mars Orbiter Mission joins a long line of Mars missions that have produced images of Mars and Phobos together. When Mars and its moon are in the same frame, you learn very quickly how tiny Phobos is, and also how dark it is. Like most of the solar system's small bodies, it has a very low albedo, reflecting only about 7% of the light that strikes it. Actually Mars is not bright either, but with a global albedo of 15% it's more than twice as reflective as Phobos, and when you adjust an image to show Mars bright, Phobos remains pretty dark.

The image in my library that's most similar to the Mars Orbiter Mission one is this, from Rosetta: 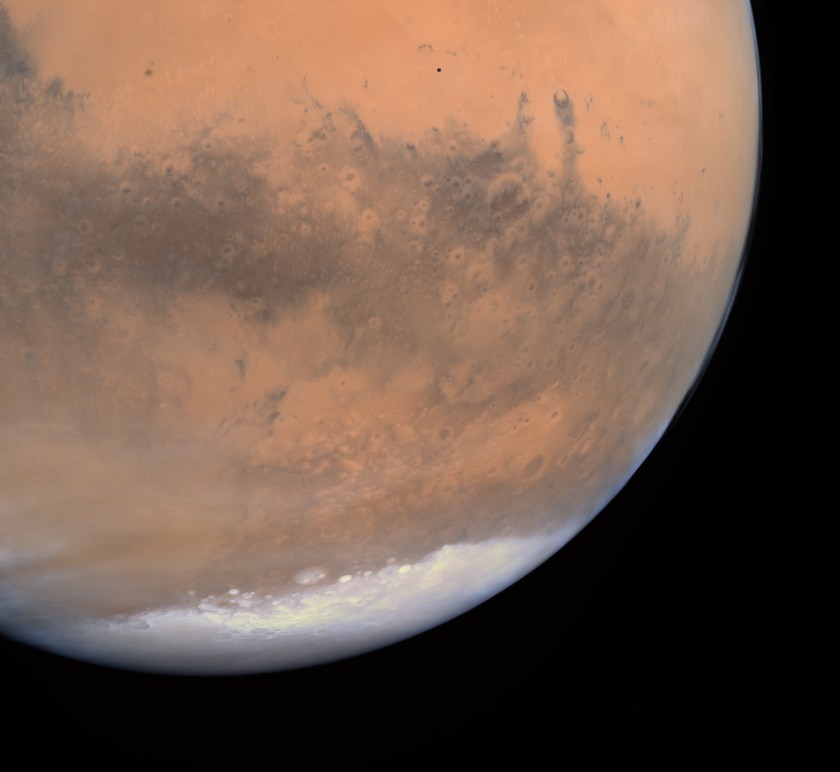 Phobos over Mars from Rosetta

As Mars loomed in Rosetta's forward view, it caught Phobos in the act of transiting the planet. You may need to enlarge the view to see Phobos' tiny dark speck.

That one actually contains not only Phobos but also Phobos' shadow:

A view of Phobos over Mars as seen by Rosetta, with various key features labeled.

...which makes me think that the Mars Orbiter Mission animation should also contain Phobos' shadow, but at the resolution and quality that I was able to grab it from Facebook, I don't see it.

Mars Express has gotten some great grayscale pictures of Phobos over Mars. Unlike Mars Reconnaissance Orbiter and Mars Odyssey, Mars Express has a distant, elliptical orbit that allows it to get pretty close to Phobos for a dozen orbits every five months, making for gorgeous photographs.

But the loveliest color images of Phobos over Mars that I've seen come from a somewhat surprising source: they're Russian. We usually think of the Russian Mars missions as failures. But Phobos 2 got some fantastic images of Phobos before it failed. Here are a few, processed by Ted Stryk. 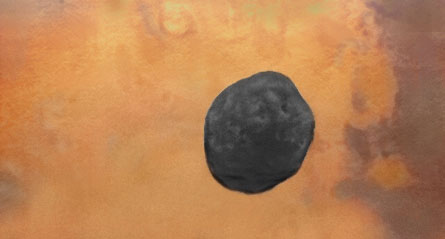 The moon Phobos, 25 kilometers in diameter, is much darker than bright, dusty Mars, as seen in this image captured by the Phobos 2 spacecraft on March 25, 1989. Phobos 2 took a total of 13 color sets of images of Phobos before contact was lost on March 27, 1989. 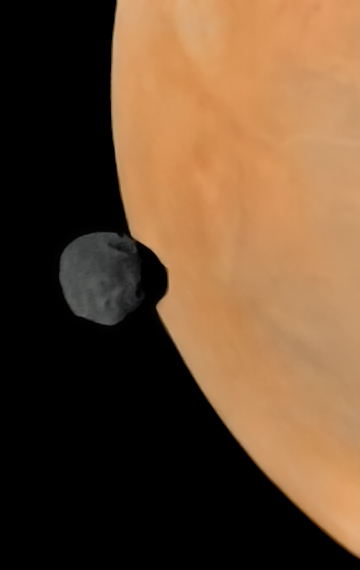 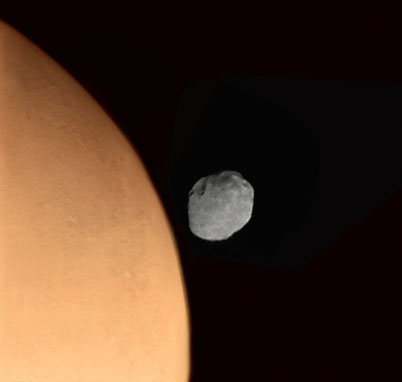 This view of Mars and its moon Phobos, 25 kilometers in diameter, was captured by the Phobos 2 spacecraft on February 28, 1989. Phobos 2 took a total of 13 color sets of images of Phobos before contact was lost on March 27, 1989.

As usual a thorough and in depth compilation. Thanks Emily.

I remember as a kid reading about the very first close up photo of Phobos, it was taken accidentally by either Mariner 6 or 7 and was in Scientific American sometime in 1969 or '70. IT was very important because it showed that it took far more mass to make an object spherical. I wonder if you guys could find it?

The image "Phobos over Mars" is awesome. Adding that to my rotating desktop! I think the moons of Mars are pretty cool, my guess is that people will land on them before we land on Mars itself.

I found the Mariner 7 photo Messy was talking about: http://www.planetary.org/multimedia/space-images/mars/first-spacecraft-photo-of-phobos.html

That image from Phobos 2 of Phobos over Mars looks terrific. You really get a sense of just how dark Phobos is, and somehow the graininess of the image makes it look like a painting.

Thanks Emily, These things are important because that's where the basic science is. The photo that proved Io had active volcanoes wasn't very pretty either, but it blew away all the theories as to why that moon looked like a pizza. The real scientific "meat" isn't always in the pretty pictures.

Emily, according to Dr. A.S. Kiran Kumar of ISRO in his speech at IITG Ahmedabad, what we are seeing is the shadow of Phobos ( not Phobos itself ): http://www.youtube.com/watch?v=l_e7L0nJTQw#t=392 (from 28:30 onwards ) If you should have the time the entire speech is also interesting.

What is the white area at the bottom of the planet? It looks like snow. I know Mars has carbon Dioxide snow but I didn't think it snowed that much on the planet.