ESA announced today that Philae will be landing on November 12, 2014. What time the landing occurs depends on which landing site they use. If they go to the prime landing site, "site J," Earth should receive word of the successful landing at 16:00 UTC (08:00 PST). If they go to the backup site, "site C," news will reach Earth at about 17:30 UTC (09:30 PST). Mark your calendars! The final choice of landing site will happen on October 14. Here is a little more detail on the timing of landing for different sites:

For the primary landing scenario, targeting Site J, Rosetta will release Philae at 08:35 GMT/09:35 CET at a distance of 22.5 km from the centre of the comet, landing about seven hours later. The one-way signal travel time between Rosetta and Earth on 12 November is 28 minutes 20 seconds, meaning that confirmation of the landing will arrive at Earth ground stations at around 16:00 GMT/17:00 CET.

If a decision is made to use the backup Site C, separation will occur at 13:04 GMT/14:04 CET, 12.5 km from the centre of the comet. Landing will occur about four hours later, with confirmation on Earth at around 17:30 GMT/18:30 CET. The timings are subject to uncertainties of several minutes.

This landing happens exactly in the middle of the weeklong, annual Division for Planetary Sciences meeting, to be held this year in Tucson, Arizona. So I'm incredibly torn about which one to attend. DPS would be a right old comet party. But in Darmstadt I'd witness history in the making. I'm considering my options, including cloning. In the meantime, here's a lovely new Navcam photo of site J. It does look relatively boulder-free compared to other areas of the comet, but there are those worrying scarps.... 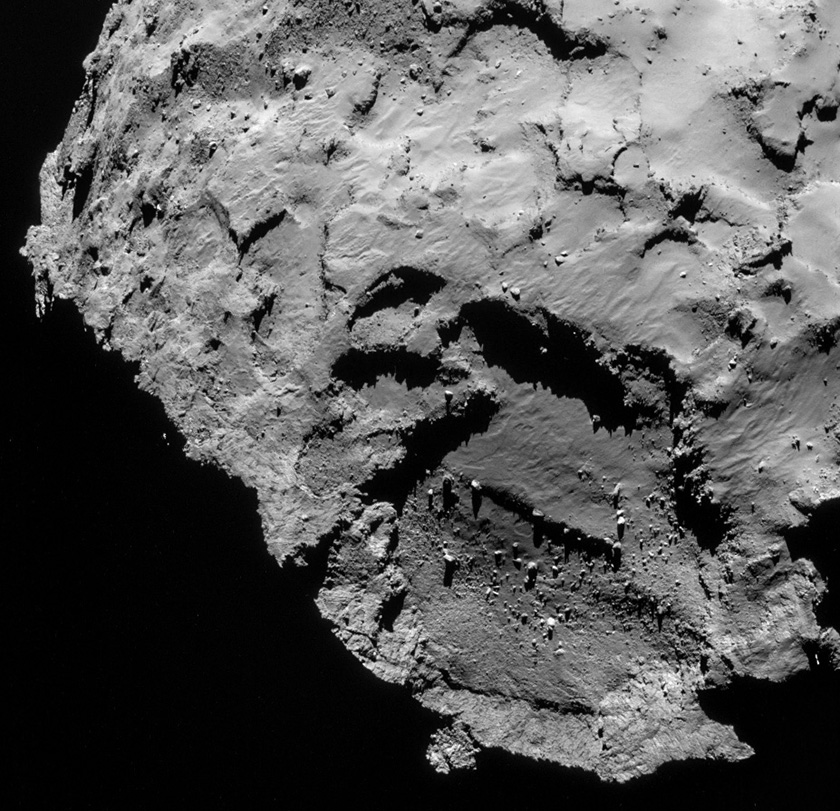 Rosetta captured this image of the top of comet Churyumov-Gerasimenko's "head" -- including the prime landing site for Philae -- on September 21 from a distance of 27.8 kilometers from the center of the comet. The image covers a region about 2 kilometers square. The proposed landing site is at top center.

Some other news from the ESA blog: Rosetta has nearly completed its global mapping phase and has now begun the very last step, the so-called "night excursion," when it shifts its path to one that views the comet from a perspective over its nighttime hemisphere (hemiduck? hemicapybara?). The night excursion lasts from September 24 to 29, and at the end of it Rosetta will be at an altitude of only 20 kilometers. On Monday, September 29, Rosetta will perform a maneuver that ends its descent, fixing it in a 20-kilometer orbit along the plane of the terminator.

And they have posted another new set of NavCam images. This time, when they shared the component frames, they went ahead and performed dark-frame subtraction to correct the vertical striping I discussed in my previous post. But when I peered into the shadows of those images, I found that the correction had gone a bit too far; the vertical stripes had reversed to being darker than the rest of the sky, and there was a loss of detail in the coma and in the shadowed regions of the comet that are dimly lit by reflected sunlight. I mentioned this to Fred Jansen on Twitter, and he kindly shared with me the uncorrected NavCam frames, on the condition that I share them with everyone else, which I am delighted to do: Frame A, Frame B, Frame C, Frame D. And while I'm at it, here's another link to the dark frame I developed for cleaning up these photos.

Here is the composite of the four. The ever-more-dramatic lighting really emphasizes the jagged nature of the boulders and scarps. Site C appears like a gaping circular maw in the center of the photo. 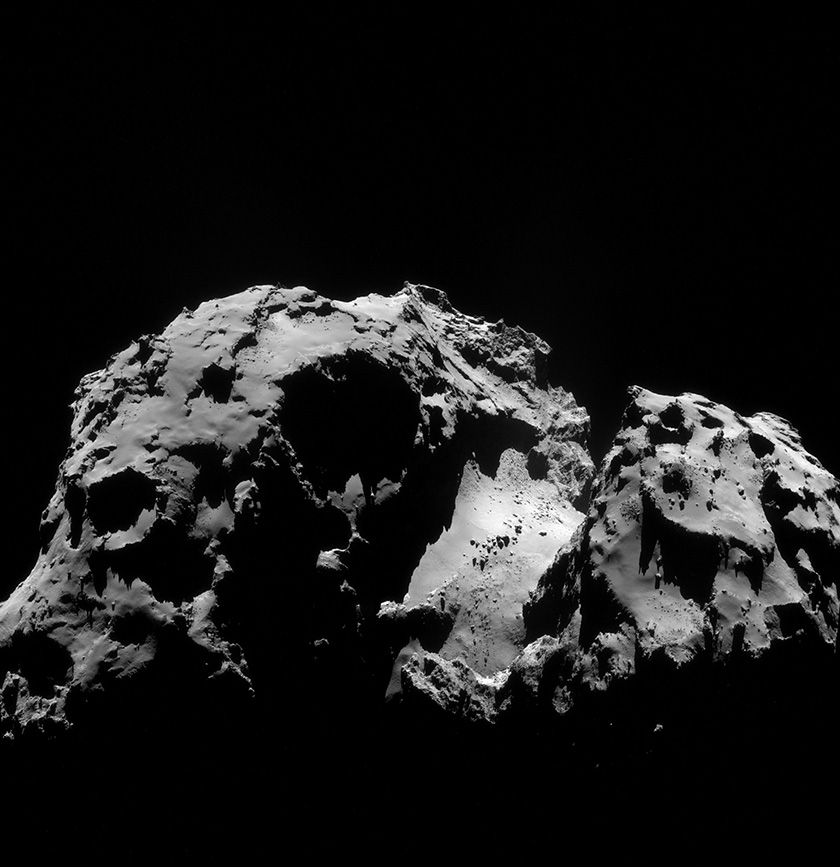 A four-image NavCam mosaic of Comet 67P/Churyumov-Gerasimenko, using images taken on September 24, 2014, when Rosetta was 28.5 kilometers from the comet. The image is roughly four kilometers across.

And, for fun, a look at what happens when you stretch the heck out of this image. The jets are not as prominent as I would have expected -- I couldn't begin to explain why. There is a good amount of detail visible in the shadowed regions of the neck area of the comet, which is dimly lit by sunlight reflected off of other parts of the comet. Just think -- if you were standing in any spot where you can see that dim illumination, some sunlit face of the comet would looming well above your horizon, perhaps even over your head. What crazy geography! 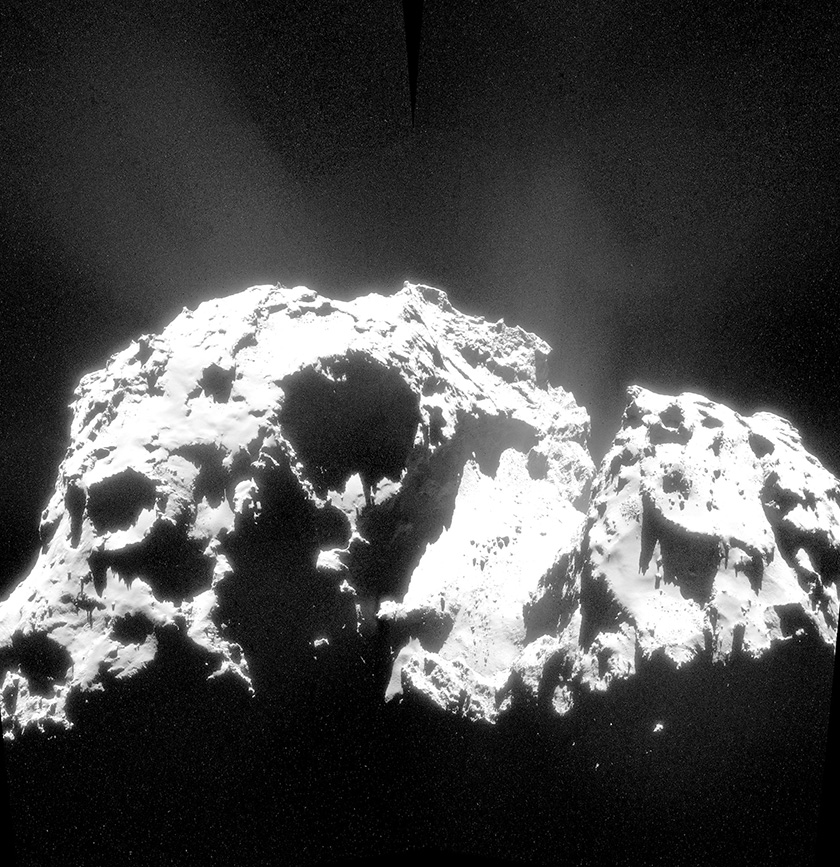 A mosaic of comet Churyumov-Gerasimenko taken from a distance of 28.5 kilometers, with faint jets visible.

Some of us might be lulled into a false sense of assurance that the lander Philae will experience the resistance of firm ground. The Moon, Mars, Venus and even Titan have terra firma. If this comet has a porous surface in that volatiles have been heated away to leave a loose pack of regolith, Philae arriving at over 1 mph per hour might see its foot pads compress the surface on touchdown much more than has ever been seen. Couldn't UV & IR detectors assuming a certain chemical makeup of the regolith arrive at a porosity? Or could RSI (radio experiment) do the same? The boulders resting on the surface of smooth powdery areas - the apparently better landing spots, indicate that the ground is firm. Whether they rolled there or were always there and saw surrounding material shed and shrink below it is not clear. Also, the density of the boulders may be little different than the powdery regolith, leaving no inclination to sink. If the craters are actually depressions or sinkholes from the depletion of volatiles, then the regolith has achieved some compression and will, more so, resist the force of Philae's landing. Some of the craters on the surface are small diameter and deep. Perhaps those are from impacts of small asteroids which embedded themselves into the regolith. Without knowing the velocity, size, mass of the impactors its impossible to determine a firmness of material. I suspect that the CONSERT radar experiment might well find all kinds of mass concentrations near the surface from small asteroid impacts; raisins in a bowl of oatmeal. Its possible that the density distribution of mass concentrations from the center of the comet to the surface will tell us something of the ratio of "rocks" to dust as the comet was forming in the solar nebula otherwise the molecular cloud.

This thing looks just like a monster kidney stone I passed recently.