How I will be watching Mars Orbiter Mission's arrival

Below are a few links to what will hopefully be working video feeds watching India's first-ever attempt to place a spacecraft into orbit around another planet. But, to be honest, I expect the best information to come through Twitter. Follow me on Twitter and I'll retweet every tiny whisper of news I come across.

I and everyone else at The Planetary Society wish the best of luck to the Mars Orbiter Mission team, the Indian Space Research Organisation, and all Indians. I hope that the most exciting word we hear this evening is the space engineers' favorite understatement: "nominal." MAVEN made it look easy on Sunday, but it's never easy, and success should never be taken for granted.

Note: The timeline below looks different from the official one because I have added 12.5 minutes to all the official times to account for the time it takes radio signals to travel from Mars back to Earth. 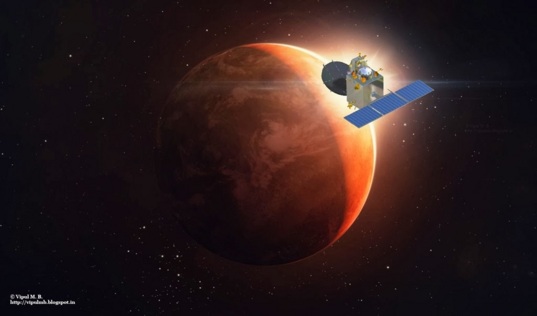 Chill out India; you don't see the U.S. getting all excited like this when they put a spacecraft into orbit around Mars. Sigh ... how sad for that. ;(

It is indeed exciting as it is the first time it has beeb successful in the first attempt.All other mission attempts failed at the first attempt using an indigenous rocket (ie launch, transmartian injection, cruise and mars orbit insertion) .So the level of palpable tension was extremely high ! Congratulations to the ISRO team.

@Ray Gunn if you had heard the Prime Minsiter's speech, you would've understood what it means to Indians ... he said "This achievement by our scientists is thousands of times more important than when the Indian cricket team wins the world cup".

Humble Indians pack lots of punch when it comes to science. When attention to the minutest details are taken care of, everything happens like clockwork. No "metric"-goof-ups ; No millimetric-errors (Hubble Telescope)! This truly makes us all proud.

MOM's first goal in entering martian orbit is reported successful. The moment should be celebrated. Tens of people have scaled Mount Everest, but the newest one has still right to celebrate. I wished that the tone of the blogs will be more considerate. In science no one steps on other's toes. All rise with each step.

@Ray Gunn: we would not have celebrated at all, if we had to make even second attempt like NASA... or had we not launched a single probe at ~ 1/10th of the MAVEN cost.

Congrats India. A giant leap forward, in to deep space exploration leaving behind all odds. Hope, the doors opened by India to all countries to innovative by their own frugal engineering to direct their resources to explore the space. Special thanks to Emily for educating laymen like me to understand more about the mission its technicality