Here's a lovely new view of Rosetta's comet, taken on September 19 (yes, today!). I have a new technique for processing Rosetta pictures to get the most out of the jets -- I'll explain below. First, enjoy this glorious new photo! I particularly like how the shadows on the part of the comet that is closer to the viewer are black black black, but if you look at the shadowed regions behind the neck you can see they are less black because we are looking at them through a faint comet jet. 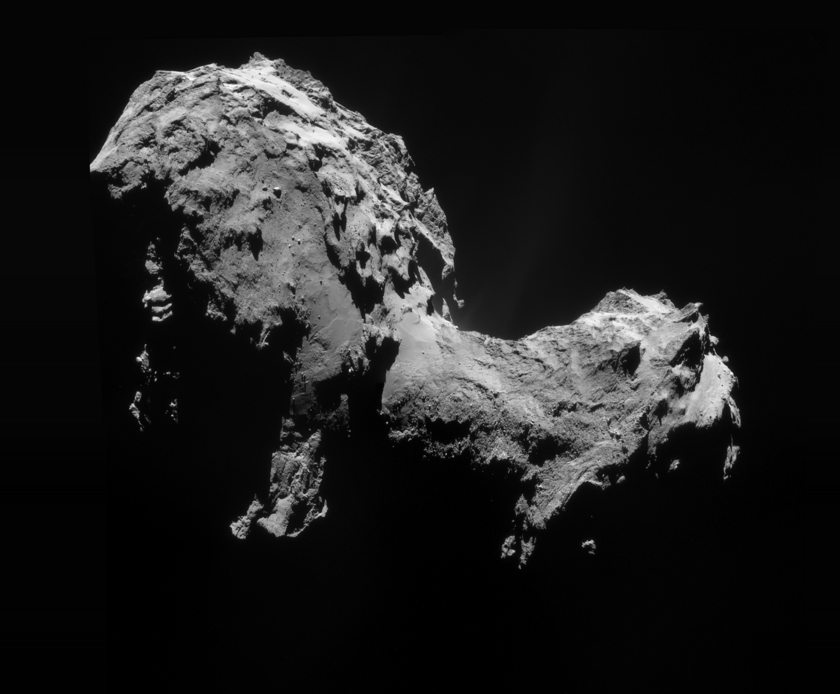 Rosetta captured a 4-image mosaic of the comet from a distance of 28.6 kilometers on September 19. Faint jets emanate from the comet's neck. In this view the comet measures 4.8 kilometers wide, end to end. This is a higher-phase view than many earlier ones, so there are longer shadows. Boulders near the terminator (day-night boundary) appear bright because their steep sides face the Sun more squarely than the ground upon which they sit.

People commonly request that I add scale bars to Rosetta photos, but I couldn't bring myself to clutter this image with one, so I measured and can tell you that as seen in this image the comet measures 4.8 kilometers, end to end, at its widest point.

If you tweak the brightness of this image, you can see at least two strong jets emanating from the neck -- maybe more -- and also evidence for more material issuing from the sunlit "body" of the comet. 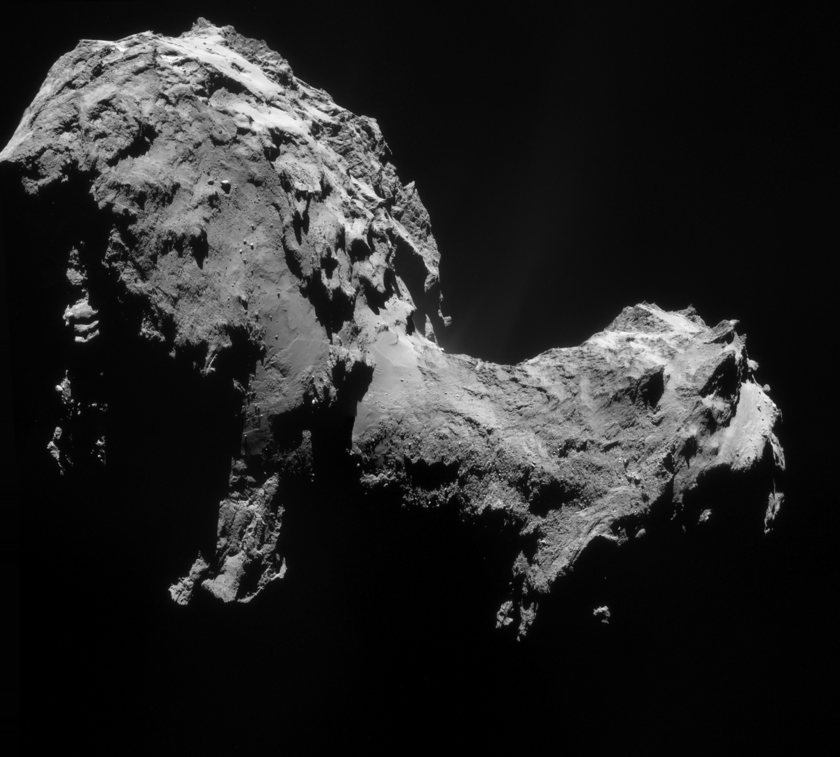 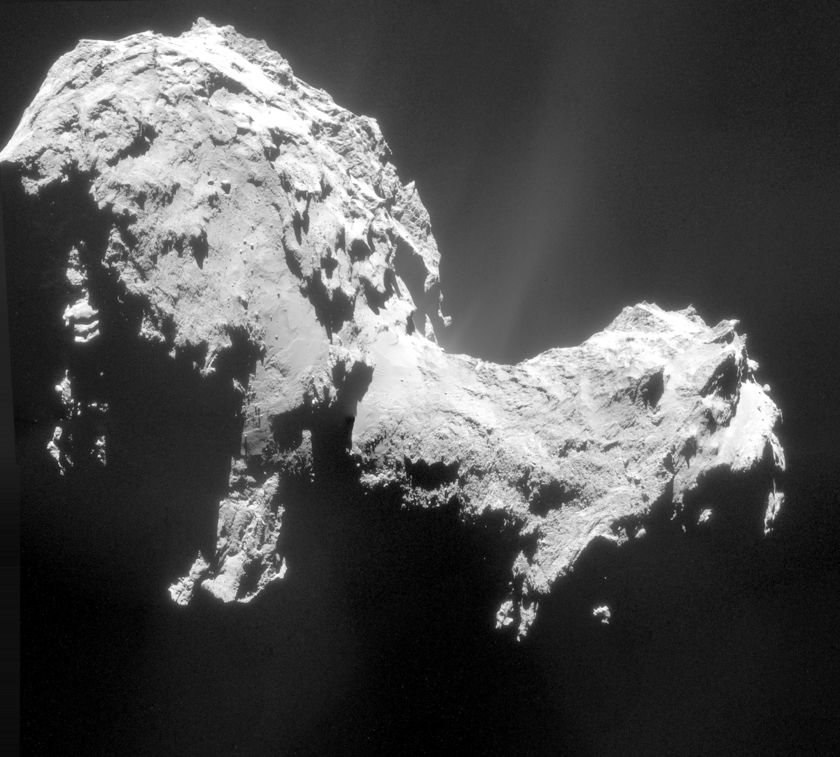 A mosaic of comet Churyumov-Gerasimenko taken from a distance of 28.6 kilometers, with many jets visible.

I have a new technique to process these images: I'm flatfielding them performing dark-frame subtraction. Let me explain what that means and why and how I'm doing it.

ESA has now released 5 four-image sets of Navcam images of the comet. When you increase the brightness of these images to look for jets, you also reveal a vertical striping in the backgrounds of the images: 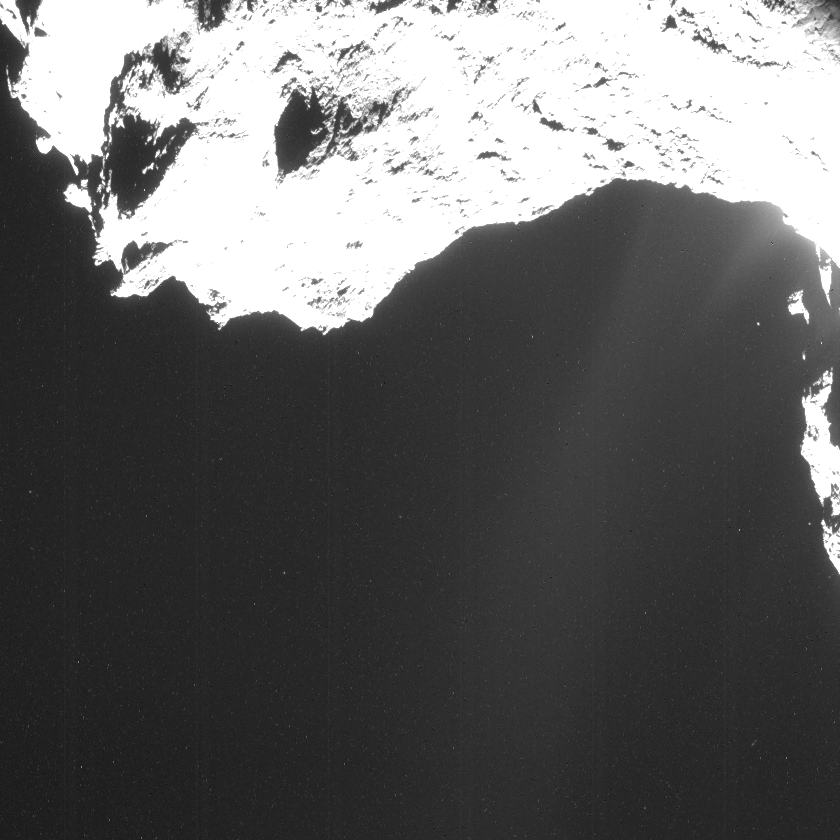 Initially, I was getting rid of this vertical striping using the technique I described for removing interline transfer smear in MAHLI images. But the results weren't perfect -- it would overcorrect in some places and undercorrect in others. This week, I discovered something about the Rosetta NavCam vertical striping that suggested a different approach. I realized that the vertical stripes were in exactly the same locations at pretty much the same intensities in all the released NavCam images. Below is a flicker-gif comparison of the same regions of two NavCam images taken on different days. You can see that the stripes are in the same exact positions. Not only that -- you can also see that there is a bunch of other speckly schmutz in the exact same position between the two images. (There are a few bright spots that appear in one image and not another: those are mostly the marks of stray cosmic rays hitting the detector.)

If most of the stuff marring the view of the jets in NavCam images is in exactly the same place from one image to the next, then what I want to do is to make a model of all of that junk -- basically, a picture that contains junk, and nothing else -- and then subtract it from the NavCam images to remove the junk and leave behind the good stuff. What does it mean to subtract one image from another? An image is nothing more than a table of data -- little square cells with numbers in them representing pixel values. A bright pixel has a high number, a dark pixel a low number. If I take an image and subtract my model of all of the junk, I'm taking away the contribution that the junk makes to the pixel value, leaving behind the signal. In theory, anyway.

How to make a model of where all of the junk is? It helps that there is a lot of black space in the Rosetta images. I stacked up a whole bunch of them, and masked out the parts that contained comet or obvious comet jets. I selected a handful of images in which space seemed to be blackest, throwing out ones where the background levels were increased too much by coma. (If I left those in, my flat field dark frame would overcorrect images, subtracting away more signal than they should.) Where there was overlap between images, I cloned from one layer to another to remove cosmic ray hits. Then I averaged layers together to make a single image, my model of the stripes and specks in all NavCam images. (My process for this averaging was somewhat unscientific, but it was good enough for the moment. I'll do a better job of this when I can get my hands on high-quality archival data rather than the raw JPEGs I'm working with at present.) Here's a screen cap from Photoshop showing how the layers contributed to my model: 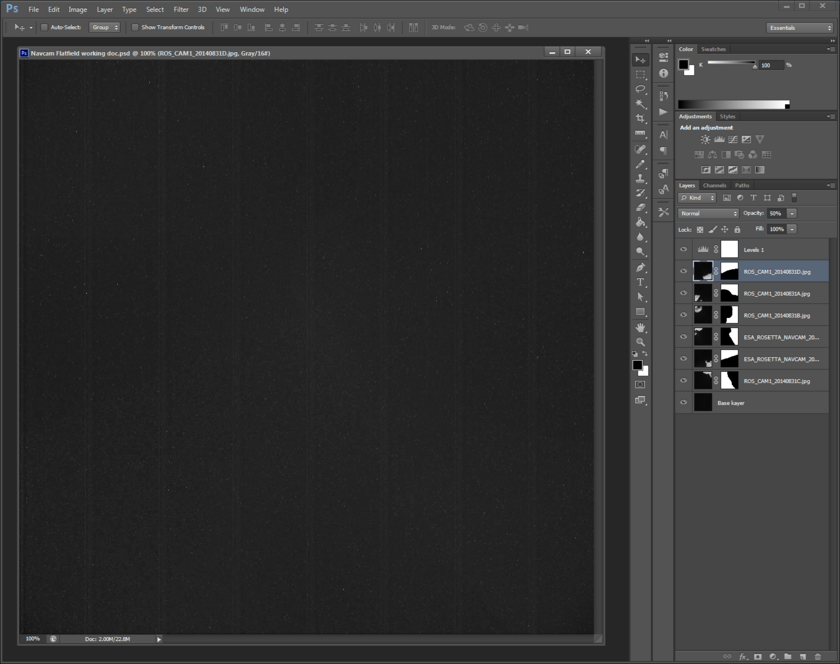 Screen cap of process of creating a NavCam flat field

It's not perfect, but it does a remarkably good job of cleaning up the NavCam images. To apply the dark frame, I paste it as a layer over the NavCam image I want to clean up, and then set the blending mode of the dark frame image to "difference." Here is a look at how it cleans up the plumes in one of the September 19 images. The "before" image is brighter than the "after" image. The stripes are mostly gone in the "after" image, as are many of the specks.

If you'd like to have a go at cleaning up NavCam images, here's my derived dark frame! It is a 16-bit PNG; I recommend converting 8-bit images to 16-bit mode before trying to hunt for pretty detail in the darkest regions of images.

Edit: As noted in the comments, I confused the term "dark frame" with "flat field" when I first posted this. Here is an explainer on what the two terms mean.

I've had good luck creating a "dark image" to subtract by taking the minimum value of each pixel in a series of pictures. No masking. No averaging. If a bright thing goes through the pixel, then those values will be ignored. Might not work for these shots, as there will be pixels that will never have a background in them.

I apologize if: a) I'm being pedantic, and/or b) I'm incorrect about this, but I was wondering: Is it possible that this is an example of dark-frame subtraction, rather than an example of flat-fielding? As I understand the use of flat-field frames, at least in deep-sky imaging, it involves division, rather than subtraction. One shines a light into the front end of the telescope (such as from an electroluminescent panel; I use an iPad), and this yields an image that shows differences in illumination due to dust specks, vignetting in the optical system, etc... When the pixel values in this `flat-field frame' are normalized to a range that goes from 0 to 1, the image of the object can be divided by the flat-field frame, and this corrects for the differences in illumination from place to place. As I understand your procedure, you used parts of various other Rosetta frames to construct a dark frame, which shows the noise produced by the detector chip. This noise was then subtracted from the image frame. Sorry if I'm being picky - I'm mostly curious to test my own knowledge of dark-frame subtraction versus flat-field division!

Yes, Emily's process is dark-frame subtraction, not flat fielding*. The key step is using "difference" to combine the images. Flat-fielding would be used, following dark-frame subtraction, to correct the dark corners in the raw data. However, deriving an approximation of the Navcam dark frame is a splendid accomplishment. When high-quality raw data becomes available, the necessary calibration frames for both dark-subtraction and flat-fielding will presumably also be released. *See "Handbook for Astronomical Image Processing, 4th edition" Berry and Burnell, Willmann-Bell, 2011).

Oops, yes, you're right, I was confused on the terminology! I've corrected the blog entry. (And thanks, Marek and Richard, for being polite about it.)

Nucleus of C-P appears to be stretching into a dumbbell shape like the nucleus of an amoeba undergoing fission (reproduction). I am convinced that this is the process that is occurring that will eventually split the comet into two viable comets with their own individual shape, orbit and coma. This will take decades, but Rosetta will see some progress in the process over the mission.

I like the new name in the title. It's a lot better than Churyumov-Gerasimenko.

I really like these slider photos. Keep up the good work! :)

This is a great picture of the neck area of the comet. The huge crack across the neck region looks an obvious source of some of the outgassing. The nature of the "stratification" through both lobes would seem to indicate a very energetic collision at some point in the past and substantial evidence that this is a contact binary object. Any thoughts on the increase in the spin rate of the comet and the tidal/mechanical forces acting on the neck region? Thanks for the great articles. :-)