Every day that Mars Orbiter Mission operates takes India deeper into space than ever, and confronts the Indian Space Research Organisation (ISRO) with challenges it has never faced before. Currently, the spacecraft is in good health and operating as expected, but they are quickly approaching the riskiest moment remaining in the mission: the orbit insertion maneuver. Indian space journalist Srinivas Laxman told me today that the orbit insertion burn will last 28 minutes and is currently planned for September 24 at 7:18 a.m. IST (01:48 UTC / Sept 23 18:45 PDT).

UPDATE September 5: Laxman has added the following from discussions with ISRO personnel: "the test firing of the engine will take place on September 22. The ISRO chairman told me that if by chance there was a problem with the engine during the test firing, then Plan B will be implemented for the orbit insertion, which he described as a salvaging exercise. Plan B means firing the eight 22-Newton thrusters. He acknowledged that if Plan B has to be implemented then 'it will not be the original mission,' which had been envisaged, though it will mark an end to a period of uncertainty."

The orbit insertion maneuver would be the first time the Liquid Apogee Motor on Mars Orbiter Mission has been fired since it was used to send the spacecraft on its way to Mars on December 1, 2013. Mission managers have always stated an awareness that this 300-day period of disuse imposes some risk on the mission. They will only get one chance at orbit insertion, and they lack experience in these kinds of deep-space maneuvers after lengthy coasting periods; what happens if there has been corrosion in the fuel lines supplying their main engine? According to a long article posted by Arun Ram at the Times of India, ISRO is conducting a review today to determine whether to test-fire the engine to make sure it will work on the day of orbit insertion. Test-firing the engine will cause the spacecraft to deviate from its current trajectory, a deviation they'll have to fix later. But if the test does not work, Ram writes, "scientists will have enough time to plan and use the eight smaller thrusters to inject MoM into the Martian orbit which, however, may not be the intended 372km x 80,000km orbit. MoM project director S Arunan will make a presentation before the authorization committee which will take a final call on this. The panel chaired by Space Applications Centre director A S Kiran Kumar will also discuss if another trajectory correction should be carried out around September 14."

Meanwhile, Mars Orbiter Mission's fellow traveler, MAVEN, is also in good health and on its planned path towards Mars. A July opportunity to fine-tune its trajectory was allowed to pass without any rocket firings because the spacecraft is on target, and according to project manager David Mitchell, it's likely that the final opportunity (planned for September 12) will also be canceled. All instruments are now powered off until after their arrival at Mars. The Mars orbit insertion burn will begin on September 22 at 01:50 UT (Sep 21 18:50 PDT) and will take 33 minutes. That time includes the time it will take for signals from MAVEN to reach Earth from Mars. 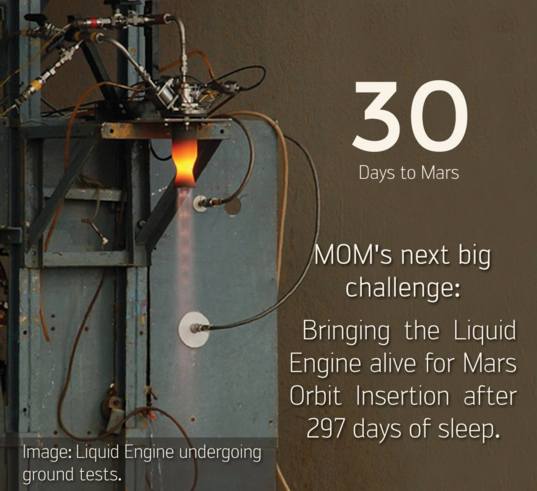 MOM is still easily detectably with a 1 m amateur dish on S-Band, now at a distance of almost 210 million km.