When Rosetta arrived at comet Churyumov-Gerasimenko on August 6, it began its survey of the comet from a standoff distance of roughly 100 kilometers, though that number varied within a small range as the spacecraft executed its odd triangular-shaped path in front of the comet. The initial survey has provided the mission with the data they need to make a preliminary selection of about five candidate landing sites for Philae (more on that below). On August 17, Rosetta spacecraft changed course to one that would approach the comet more closely. This evening, Rosetta will halt the approach, arriving at its new standoff distance of approximately 60 kilometers. As it did previously, the spacecraft will circulate around a point in space sunward of the comet, completing three triangular arcs over the next 10 days.

The comet has grown increasingly large in the NavCam field of view as the spacecraft approached it. 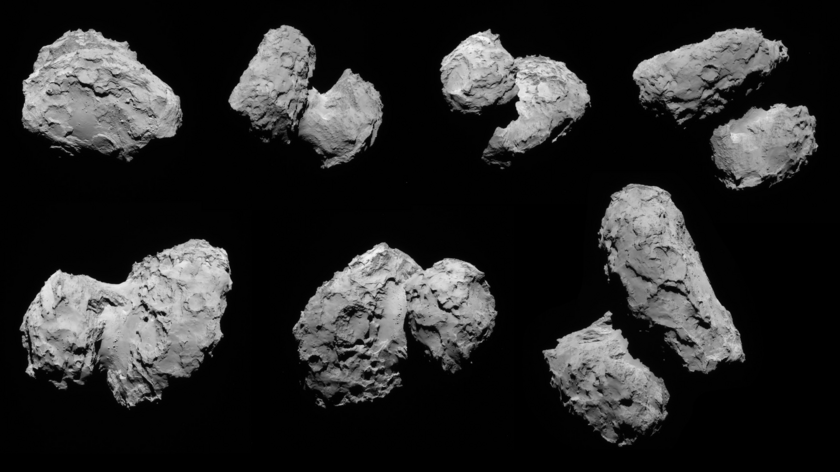 A collection of images released by ESA to show Rosetta's view on the comet as it transitioned from its initial 100-kilometer orbit to one that will have an average distance of 60 kilometers. They have been reoriented so that the Sun appears to be coming from the top of the image. The images were taken on August 15-18 (top row) and 19-21 (bottom row). They were taken from distances of 91, 93.5, 102, 84, 79, 83, and 69 kilometers, respectively.

The last three images in this series, taken from closer distances than ever before, are especially nice: 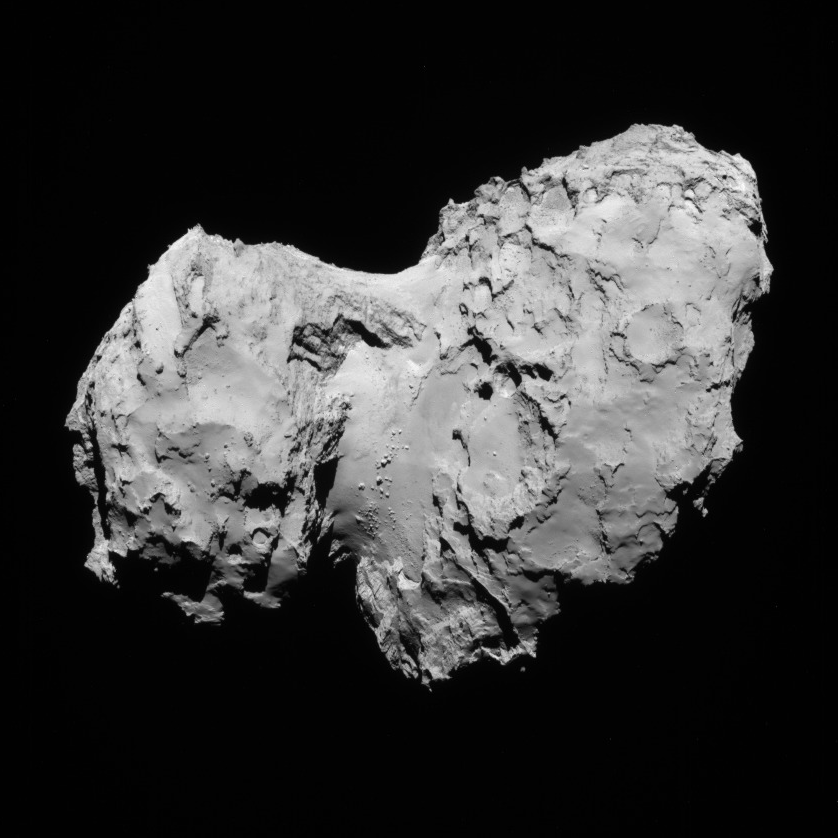 Taken from a distance of about 79 kilometers. 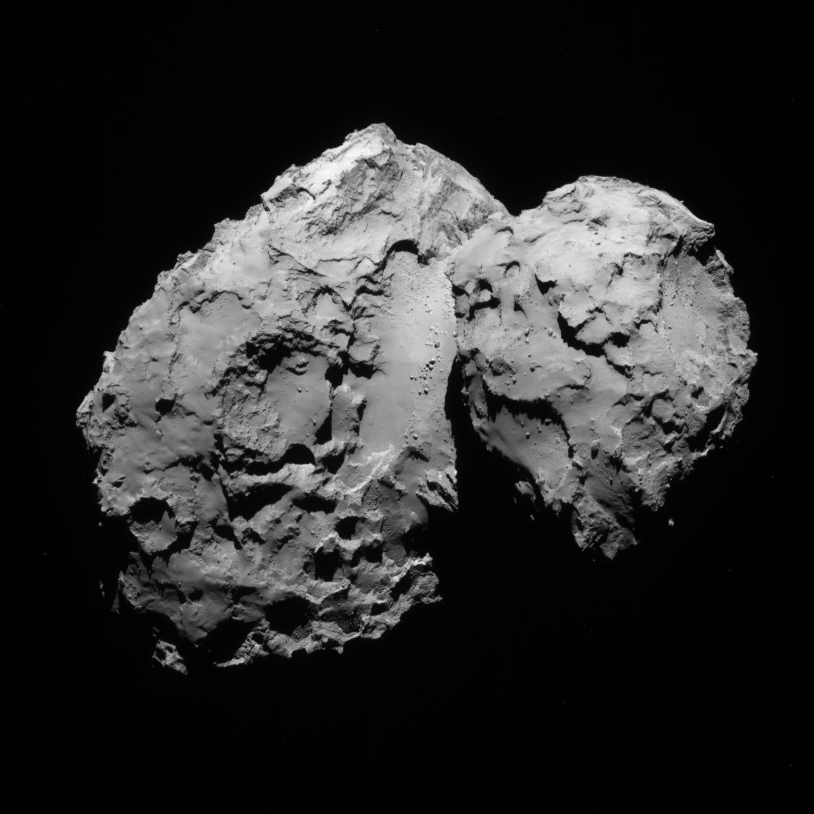 Taken from a distance of about 83 kilometers. 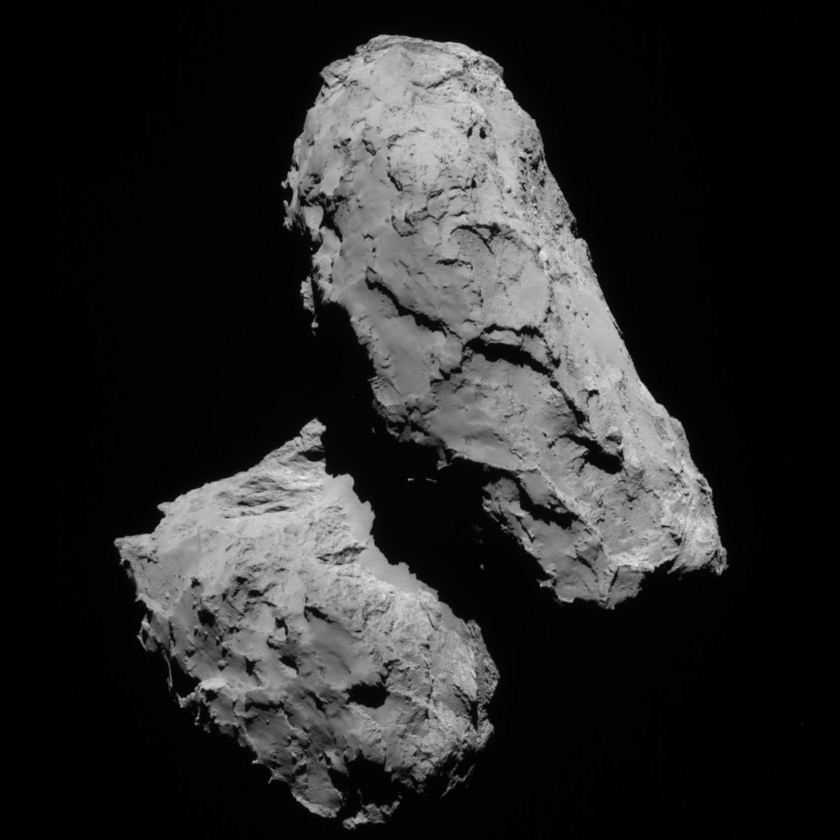 Taken from a distance of about 69 kilometers.

Rosetta fans have been very focused on the images, but there are other kinds of scientific observations being performed at the comet. One measurement that's important both for science and for mission operations is to determine the mass of the comet. According to the ESA blog, radio tracking information has yielded the first reasonably precise estimate of the comet's mass at 1 × 10^13 kilograms, plus or minus 10%, a number that English-speaking Europeans would call "10 trillion" "10 billion" and Americans call "10 quadrillion" "10 trillion" kilograms. And hey, since India is an interplanetary nation now, I might as well add for fun that English-speaking Indians call this "10 lakh crore" kilograms. With all this international English number-word confusion it's probably best to stick with scientific notation for large numbers!

Once you have the mass, you can determine the density, if you know the volume. I have not yet seen a specific estimate for the dimensions or volume of the comet based on OSIRIS imaging. But we've got great NavCam images, so this suggests a weekend homework problem. Are you ready? Use Rosetta's NavCam images to estimate the volume of the comet. Then estimate its density. Here are some useful facts: NavCam images have a field of view of 5 degrees and are 1024 pixels square. The Rosetta team always tells you the distance separating the spacecraft and the comet for every NavCam image. So you can get the field of view (that is, the width or height) of any Navcam image by doing: [2 × Rosetta's distance × tan(2.5°)]. You can get the pixel resolution by dividing that number by 1024. I might try approximating the comet as two ellipsoids, one for the "head" and one for the "body." You need three measurements through the ellipsoid, so you'll have to look at multiple NavCam images from different points of view to get those measurements. Most image processing software (even Microsoft Paint) will allow you to measure pixel distances on images. The volume of an ellipsoid is (4/3) times pi times the radii of the ellipsoid's three axes. If you do the math, share your estimate in the comments! After modeling it as two ellipsoids, I might also try modeling it as two elliptical cylinders to see how much my model for the shape of the comet affected my estimate of the volume. Then divide mass by volume to get density. What do you get? Anything under 1000 kg per cubic meter is less dense than water ice, so would imply a porous interior.

The survey of the comet at 100 kilometers has provided the Rosetta team with the information they need to perform an initial selection of landing sites. They are under considerable time pressure. To balance between the availability of solar power (which requires proximity to the Sun) and the hazards of increased comet activity (which goes up as the comet approaches the Sun), the landing must happen in mid-November. They'll finish the process of selecting candidate landing sites this weekend, and have stated that they'll announce the candidate sites on Monday.

In this initial round of landing site selection, they are primarily concerned with engineering constraints. They're looking for places that they can deliver the Philae lander at the right speed, with the right illumination conditions along the way, while remaining in contact with the lander all the way down. The site will need sufficient sunlight to generate solar power but not so much that Philae will overheat, so the landing sites will necessarily be out of permanently sunlit or shadowed regions. You can read more about landing site selection constraints on the ESA website. Here is a timeline of the landing site selection process, interleaved with the Rosetta operational timeline I posted earlier. The operational timeline is in italics.

Hi! My simple understanding of numbers says that 10^12 is in Europese called a billion (=a million millions), whereas a trillion would be 10^18. Thanks for the almost googolplex interesting writings you have given us fans. And congratulations post festum to your getting your "own" asteroid!

Sorry, I was wrong (an unpleasantly common occurence): even the Englishmen use the "short scale", where 10^12 is a trillion, whereas we mainland Europeans stick to the "long scale" (110^12 = a billion). But I was NOT wrong in the thanks and the congratulations. Two out of three correct is not bad, is it?

Emily, regarding mass estimates: while it is true that the ESA article provided no measure of uncertainty, the original conference paper, "67P/Churyumov-Gerasimenko mass determination based on a new method for modeling non-gravitiational forces and accelerations" (Maquet 2012) gives the mass estimate as 3.14±0.21⨯10^12 kg. This isn't remotely a large enough error bounding to accommodate the new mass estimate... I'd like to know what went so wrong the first time around!

You're the first morning read every day these days, Emily. Congrats on the asteroiud as well! There's an interesting debate going on the ESA site about whether Rosetta is officially in orbit around 67P yet, or whether the triangular manoevres are merely part of the elaborate rendezvous. If we are not yet in 'orbit' proper, do we know exactly when we will be? Keep up the excellent work

On the Phialle twitter account they to have reduced the selection to five sites. It would be cool to know how they decided those sites and the advantages/disadvantages of each. I hope the ESA goes over this on Rosetta blog, or someone here. Also I've noticed that much of the southern hemisphere has not yet been seen, I'm guessing due to the funny triangle orbits. Are these locations inaccessible to the Philae lander and we'll see these parts of the comet in September? I wonder if the Philae team consider landing in that area after it's been mapped?

With a very crude estimate, by deomposing into two circular cylinders, and the august 21 NavCam I get a density of 311 kg/m³: http://i.imgur.com/EaooABk.jpg The previous density estimate has been 102 kg/m³. The mass correction has been a factor of 10/3.14 = 3.18, leading to a density correction to 325 kg/m³, assuming an unchanged volume estimate. Hence a value between about 300 and 350 kg/m³ sounds plausible.

@Jorn et al., ugh, I got too cute with those numbers and made errors. Thanks for your corrections.