Rosetta's view of Churyumov-Gerasimenko is getting better and better. Today they released a new image from the high-resolution OSIRIS camera, and it's a very fresh one, taken only two days ago. Distinct features are coming into view. I'm curious about the black dot on the duck's back -- it reminds me of the black boulder (PDF) that Hayabusa saw on Itokawa. 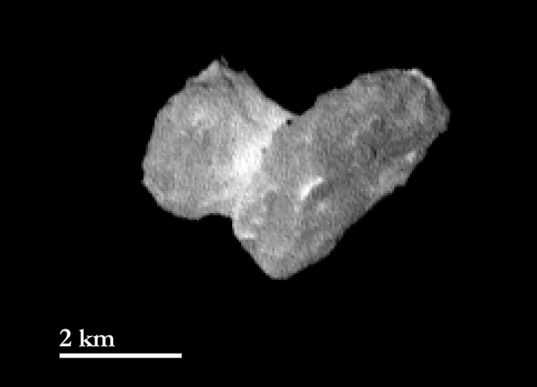 Rosetta obtained this view of the comet on July 29, 2014 from only 1950 kilometers away. The pixel scale is about 37 meters. This image has been enlarged by a factor of 3 from the original resolution.

This is finally a detailed enough image for me to update my "comets visited by spacecraft" montage! I'll probably re-update this again with a better image in the future, but it's good enough for now. (Visit planetary.org/cometscale to see if there's a newer version -- that link will return you to this post now, but if I update the image again I'll make it go to the updated one.) Notice that of six comets that we've visited, at least four of them seem to consist of two (or more) bodies welded together with a narrow neck in between. There's the Borrelly bowling pin, the Hartley 2 dog bone, Halley's dumbbell, and now Churyumov-Gerasimenko's duck, making double-lobed bodies more common among the comets we've visited than the marginally rounder shapes of Tempel 1 or Wild 2. 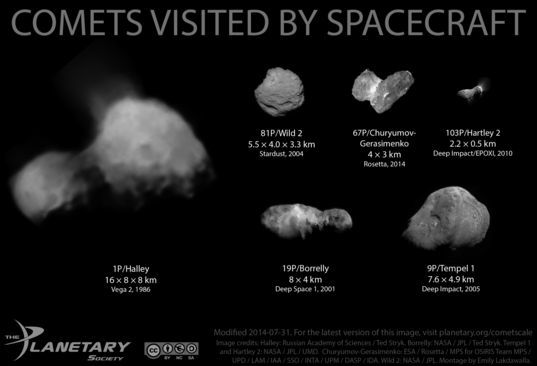 Scale comparison of comets visited by spacecraft as of August 29, 2014

As of 2014, six comets have been visited by spacecraft; the most recent addition is Rosetta's 67P/Churyumov-Gerasimenko. This version of the montage has now been supplanted by a more recent one.

The Rosetta image looks a little weird in this composite because Rosetta is approaching the comet from the direction of the Sun, so it's equally lit all over; there's no cast shadows, no shape discernible from shading. Eventually there should be some Rosetta pictures of the comet whose lighting geometry matches the other photos better, and I'll put out a new version then!

Black dot... could it be a shadow of the spacecraft if it's approaching the comet from the Sun?

Oh no that's stupid... too big, not possible. But it looks so black. Reminds me old spacecraft(Viking1) photo markers.

Just a thought... Perhaps one lobe could be called Churyumov and the other Gerasimenko. That way the comet would truly fit it's name!

Thanks for the update, Emily! It's quite curious that the two bodied comet is so far the more common. Who would have expected space to surprise us? Was gonna ask if there are any graphics of the comet and spacecraft in relation to the solar system, but I just found the Rosetta Rendevous model on solarsystemscope.com. This mission is so much more exciting than I had at first thought.

Emily, you need to update your Comet Visited by Spacecraft picture. You forgot about Giacobini-Zinner, the first comet visited by a spacecraft. Even though ICE didn't image the nucleus, it should have an honorable mention on your poster.

Nice photo Emily! Thanks for sharing! On my screen I see 2 prominent black dots and as I look physically closer I see more. Could these be data drop outs or imaging artifacts?

@Superluminal ICE wasn't really a cometary spacecraft also it had no camera (so couldn't image the comet anyway), it was intended for Solar particle measures/plasma work. It was a joint mission by NASA and ESA. In my humble opinion I'd not mention it as it contributed no images (so nothing to compare with the other probes). @Emily - thanks for the montage and particularly the Vega2 image of Halley (hadn't seen that one before), although ESA's Giotto got closer - the image quality appeared not quite as good.

I'm looking forward to seeing if MRO's images of Siding Spring are going to be good enough to include on this chart! They expect a resolution of about 150 meters per pixel. That won't be a comet visited by a spacecraft, it's a spacecraft visited by a comet! I'm not planning on adding mentions of other comets for which we don't have images -- the point of this composite is to do a scale comparison of comets, not to chronicle comet missions.