I have been working all day on a blog post about a couple of recent papers on some of the funny things that moonlets do when they interact with Saturn's ring system. That blog post isn't quite ready (you may see it next week), but I thought I'd share an image I put together to illustrate it, because this took quite a bit of effort on its own.

Behold: the eight moons that orbit closest to Saturn -- at least the eight ones that have formal names that we are sure aren't just temporary clumps, in images that Cassini took over a period of five years. Seven of the color composites came from Gordan Ugarkovic's Flickr page. 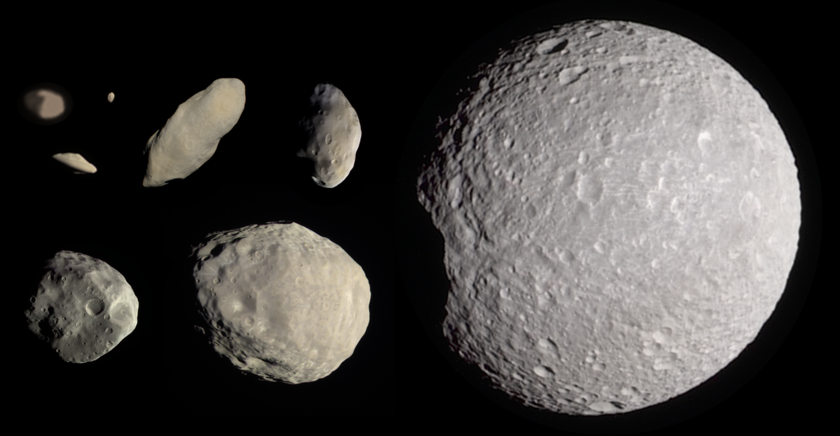 The eight innermost moons of Saturn, in color images collected by Cassini between 7 June 2005, and 5 July 2010. Pan and Daphnis (top left small moons) orbit within the Encke and Keeler gaps in the rings; Atlas (below Pan and Daphnis) orbits at the outer edge of the main rings. To their right are Prometheus and Pandora; Prometheus orbits just inside and Pandora just outside the F ring. Below them are Epimetheus (left) and Janus (right), which trade positions every four years, averaging out to the same distance from Saturn. Mimas orbits considerably farther away, but its gravitational effects influence the positions of gaps and waves within the rings. At full resolution, the montage has a scale of 500 meters per pixel.

I've made moon montages before, but not of these little ones. You don't have a lot of options to choose from when it comes to pictures of these smaller moons, for two reasons. One is their size: to get a decent amount of detail on a small moon, Cassini has to get a lot closer to it than it does to the big moons. Mimas is about 400 kilometers across, less than a tenth the size of Titan; Atlas is only a tenth of Mimas. So Cassini has to fly a hundred times closer to Atlas than it does to Titan to get a picture with the same number of pixels across the disk.

The other reason is that these moons are snugged up close to Saturn. Cassini's orbit rarely passes closer to Saturn than the orbit of Mimas, so its close-approach distances to the moons that lie closer to Saturn are limited; they bottom out at roughly 50,000 kilometers. When Cassini does close flybys of the more distant moons, like Enceladus, Dione, and Rhea, it can get much closer -- down to a minimum of 25 kilometers for Enceladus. So opportunities for high-resolution imaging of the small moons are quite rare, and our pics of Pan are especially lousy.

With so few image choices, it's hard to make a pleasing montage. I like to select images with similar phase angle; I prefer phase angles of around 30 or 40 degrees, because there's a nice nearly-full disk but the light comes in at enough of an angle to outline interesting topography. Anything higher and you start losing quite a lot of terrain to nighttime shadow. Anything lower and all you see is a splotch of color -- which is fine if the moon has a lot of contrast (like our Moon, or Iapetus, or Io) but not so good if the surface is relatively smooth with few color variations.

As a by-product of making this montage, I produced this list of most of the highest-resolution observations that Cassini has taken of all the moons interior to Mimas. The links take you to the Rings Node of the Planetary Data System, where you can download all the data, if you want to play with it yourself. The note in the "Color?" column refers to how many different filters were used. RGB means red, green, and blue; UVGIR means enhanced color -- ultraviolet, green, and infrared. Usually these have clear-filter images too. "Full" means they have IR, R, G, B, and UV. "Some" means they have some subset of these but not enough to make a color composite that's anything like true color. "Hyper" means they ran through every possible filter combination.

I can't remember if it was mentioned previously but I wonder what imaging opportunities may arise during the final close orbits at the conclusion of the mission? Hopefully we'll get some "it's time for my close-up Mr DeMille" moments.