I am pretty much the last space blogger on the Internet to write about this, but I couldn't let it go by. Have you ever wished you could enjoy the astronauts' view of Earth from the Space Station? Now, you can. Just go to the live feed from the High Definition Earth Viewing (HDEV) experiment, crank it up to its highest resolution, let it take over your monitor, and watch Earth spin by. It's mesmerizing. The Station moves, Earth spins, clouds shift, and Station's orbit drifts westward over time, so the view is never the same twice, except for that thin blue smear of atmosphere arcing across, the puffy blanket that protects all life on Earth from the harsh stark emptiness outside. As much as I love the other planets, there's no place as beautiful as home.

If the feed is presently not working (gray means it's switching cameras or out of communication range, while black means it's in the dark, because after all the cameras spend half their time on the night side of Earth, just as you and I do), here is an example image I grabbed from the feed this morning, showing the east coast of the United States from Long Island in the north (right) down to the Outer Banks of North Carolina in the south (left). 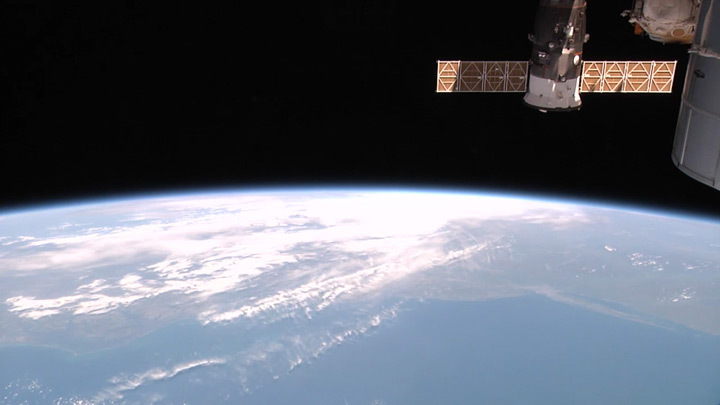 The High Definition Earth Viewing (HDEV) experiment consists of four commercial, off-the-shelf, high-definition cameras in a box bolted to the outside of the Space Station. The "experiment" is a test of "the hardware's ability to survive and function in the extreme radioactive environment of Low Earth Orbit." The cameras are mounted in fixed positions: one (a Hitachi GV-HD30) pointed forward; one (a Toshiba IK-HR1) pointed nadir; and two (a Sony FCB-EH4300 and a Panasonic AGHMC150)  pointed aft. 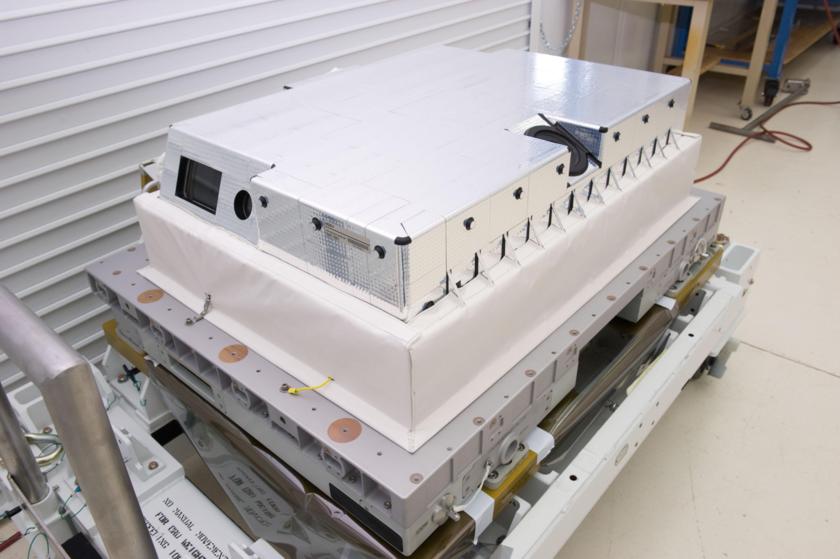 Its interface is made to be as simple as can be; once powered on and warmed up, HDEV transmits video straight to Earth, live, without recording it onboard. The cameras automatically switch from one to the next. In one mode, it switches between cameras roughly every two minutes: first, the forward view; then the nadir view; then the two aft views. There's usually a gray screen for several seconds in between camera views. The cycle is intended to give viewers a chance to identify features on the ground in the forward view, and watch them go by at nadir, then see them recede aft. At other times, it's operated in a different mode, with the cameras switching less frequently, instead dwelling on the forward and aft views for many minutes. While I watched it this morning, it appeared to go through the camera cycle just twice each orbit, just switching to nadir mode over the terminator (the boundary between day and night). Here's a sequence of images taken as it was entering orbital sunset near the southernmost latitude it can reach (south of 55 degrees):

A sequence of 76 photos taken by the forward-facing camera of the High Definition Earth Viewing Experiment (HDEV) aboard the International Space Station watches ocean, clouds, and ice pass by as the Station moves across the terminator into the shadow of Earth.

When I don't have it set to full-screen mode, I like to watch it at this website, where the page is split among live camera view, a whole-Earth map view showing the Station's orbit, and a Google map showing the location of the Station on the ground. In the orbit map view, a yellow circle drawn around the Station shows you where its local horizon is on Earth. Everything you can see in the camera view is somewhere within that circle. The Station is in a low orbit, so its horizon is not very far away!

If there's a specific spot on Earth that you'd like to see in daylight, you may be frustrated, at least initially, particularly if you live at a higher latitude. But you quickly develop an appreciation for how the Space Station's orbit works. Here is an explainer, based on information from the Gateway to Astronaut Photography of the Earth website. The Space Station orbits Earth once about every 90 to 93 minutes, completing slightly less than 16 orbits per day. The number isn't exact because even though the Station is in space, there is enough air even at the Station's altitude to exert drag on the spacecraft, making its orbit decay into a lower one with a shorter period. The Station gets a boost occasionally to prevent its orbit from decaying too much.

The Station spends half of every orbit in daylight and half in night. On this map, the daylight portion is in yellow, the nighttime portion in blue.

The rotation of the Earth underneath the Station makes its orbit seem to shift westward over time. Remember, the Station orbits once in about 90 minutes, or about 16 times a day, so 1/16 of a day passes between successive orbits, so the orbital tracks move westward by about 360/16 = 22.5 degrees of longitude each time.

Meanwhile, there are other factors that affect how the plane of the Station's orbit lines up with the plane that separates night and dark on the globe of Earth; these also drift with respect to each other over time. The portion of the orbits that is in daylight shifts a little bit to the east each day, setting up a cycle in illumination conditions that repeats about every two months. At the time that I'm writing this blog entry, the daylight portions of the orbits are on the descending part of the Station's orbit around Earth, like in this map:

Over time the sunlit portions of the orbits will crawl back north again, so it's on the ascending part of the track:

And of course there's a period when the sunlit portions of the orbit are only in the northern hemisphere:

The whole sequence takes about 63 days to complete

The other day, as I was watching the Soyuz depart the Station, I caught an interloper in the view: the Moon! It makes my brain hurt to try to puzzle out when it's possible to see the Moon in these photos.

Pretty neat to tune in to the ISS HD live stream and see the Moon rise :) http://t.co/RaZgNNoBg8 pic.twitter.com/P1EPfnnbfZ

It is immensely rewarding to watch. Whether it's Mars or Earth, photos from space bring home the fact that we're all astronauts, flying a fragile ship through the solar system. Now can we take this to Mars, please?

You're mistaken, Edgar; they are live. People even watch the transmission from above as the same time as they go out and see the ISS pass over their heads!

Hi Emily, this is Rui from Portugal and this is my first ever comment in the Planetary Society so plese, forgive my english! I love to see these live images from the ISS and maybe 3 or 4 days ago as soon as I clicked to watch, bam, the Moon just like the image you have above, it is so pretty!! Just logged in to ask ( and sorry if my question will "make your brain hurt" eheh) but it's possible to know exactly that, when the Moon is going to appear? thanks in advance!!

Imagine the benefits that would occur if these images were widely disseminated. NASA has ability and right to squeeze these images into every US public building-school, library, city/village/town hall, post office etc. Now these images are inundating the public on a daily basis. Millions of Americans will see the earth from space a handful of times a day. It is Marketing 101-exposure is everything. Change what Americans see everyday and begin to change the way we think. Now: The "overview effect" is introduced to all They see the true indivisibility of earth-more environmentally conscious Public interest aligns with the goals of the science, environmental, and space exploring communities A more scientifically literate electorate in produced Funding to space and science increases The mirror, photos of the poor by Jacob Riis, photos of the West by Ansel Adams, Apollo 8’s Earthrise photos all changed how we thought for the better. Seeing the blue earth from space everyday will do the same.

Not live, not continuous. The recorded feed is checked and edited in chunks and then broadcast once authorized.