Rosetta and Philae have very nearly completed a six-week phase of spacecraft and instrument checkouts to prepare the mission to do science. Recently, the lander used its cameras for the first time since hibernation, producing some new photos of Rosetta in space. This one, taken by the Rosetta Lander Imaging System (ROLIS) camera, is staring at the Rosetta spacecraft's thermal blanketing. ROLIS is a downward-looking camera -- it will eventually be used to take images of the landing site before and after landing, like the Mars Descent Imager (MARDI) on Curiosity. 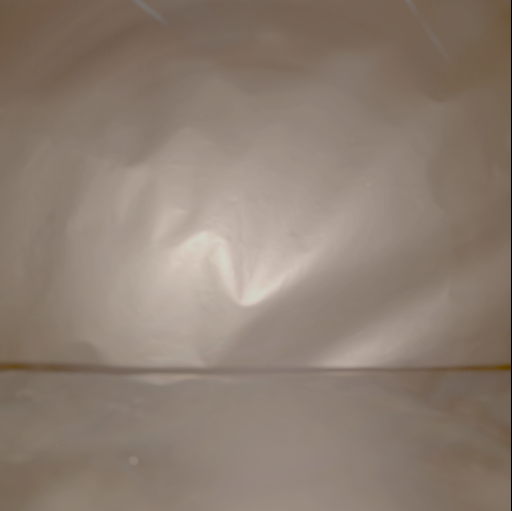 During the post-hibernation instrument commissioning phase, Philae's instruments were put through their paces. This photo, from Philae's ROLIS camera, shows thermal blanketing material covering the Rosetta spacecraft. ROLIS is a downward-looking color camera that will map the landing site on the comet both before and after landing; after landing it will be about 31 centimeters above the comet surface.

And these two photos, taken by CIVA, show the spacecraft's solar panels. Unfortunately, the version of the image shared with the public was badly chewed up by JPEG compression artifacts; I've adjusted the contrast in the image to suppress those and give a cleaner view of the barely-lit edges of solar cells and panels that make up the two huge Rosetta solar arrays. (A version shared by CNES is marginally less JPEGgy than the one shared by ESA.) If you're having trouble seeing the geometry of the solar panels, compare the view to this colorized one taken by CIVA during the Mars flyby, which sees the panels against Mars. Here, the panels are imaged against black space, and the sun glints off the hardware are much brighter than any background stars would be, so you don't see stars. (I'm not even sure CIVA is sensitive enough to pick up light from background stars even if the glints weren't there. I have not checked.) 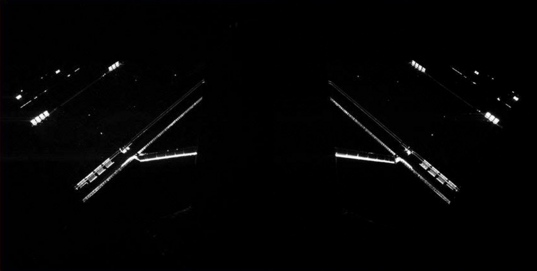 During Rosetta's post-hibernation instrument commissioning phase, the CIVA cameras on the Philae lander were powered on and commanded to take photos. From their position on the lander, they saw sunlight glinting off of edges in Rosetta's two solar panels.

As I mentioned in a previous blog entry, following the completion of instrument commissioning this month, the next step is for the spacecraft to match velocity with comet Churyumov-Gerasimenko. Four maneuvers are scheduled to happen every other Wednesday beginning May 7.