Check out this relatively new image from HiRISE of Curiosity. I saw it at the Lunar and Planetary Science Conference, but didn't notice when they released it to their website. Look how crisp and clear those tracks are! 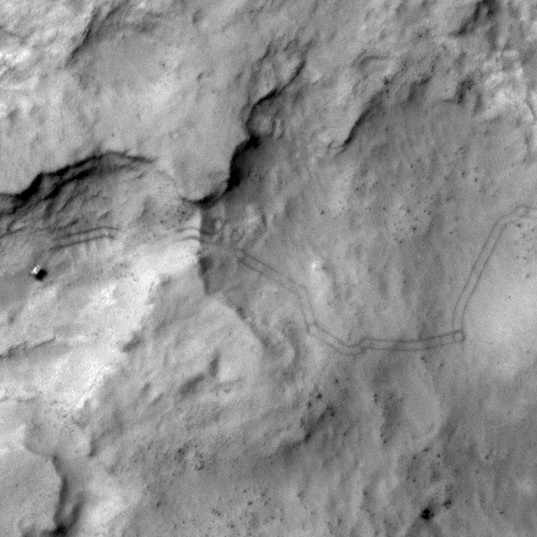 Here's a wider view. It's worth clicking through twice to enlarge to its full resolution and take in the little speck that is an enormous rover in the midst of a complex landscape. 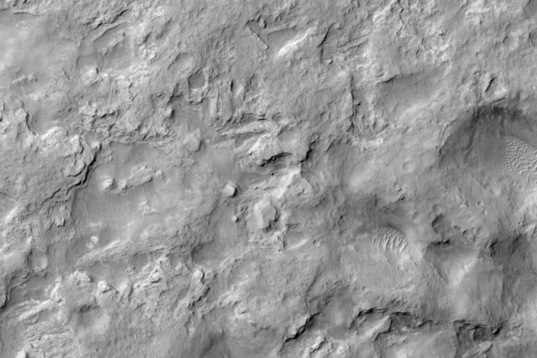 Curiosity made tracks in softer valley-floor sands as it crawled up and over the dune across Dingo Gap. The image is about 750 meters wide by 500 meters tall.

The name of the HiRISE image observation is "Dune Monitoring of Curiosity Traverse in Gale Crater." The image goes quite a bit south of the rover, covering the black sand dunes; they're keeping their eyes out for motion of the dunes, and of the ripples atop the dunes, over time. It also encompasses all of Curiosity's tracks to date, meaning they can use it to monitor how Curiosity's tracks and other related disturbances, like the landing blast zone, have changed over time. (It's now very hard to pick out the spot of the landing; those blast signs have faded.) Unfortunately, the requirement of covering all of the tracks to date means that they didn't get any of the rover hardware (rover, backshell, parachute, or descent stage) in the central, skinny color strip of the HiRISE image. I've now added it to my list of HiRISE images of the Curiosity site.

Dune monitoring requires repeat imaging, so if watching rover progress didn't give the HiRISE team enough reason to image Curiosity repeatedly, it seems Nathan Bridges (who leads the dune motion monitoring effort for the Curiosity team) has convinced them of a second reason. Watch for more of these images! I heard through Twitter that there's already another HiRISE photo of Curiosity, taken on March 26, which would have been sol 581, with the rover close to the north edge of Kimberley. Stay tuned for that!