The Curiosity mission has had the pedal to the metal over the last few days. They worked their way through a choke point and on into the home stretch of their drive to Kimberley, where they'll likely stop for several weeks of science work. They managed to drive nearly every day between sols 559 and 569, even though Mars Reconnaissance Orbiter went into safe mode on March 9  (don't worry, they successfully returned it to normal operations on March 13). The safe mode cost them one driving sol (567), but otherwise it's been steady drive, drive, driving. Unfortunately, because the downlink from Curiosity was slipping later and later in the day, they had to plan every drive sol on a relatively short schedule, leaving virtually no time to insert science observations into each day's plan. The most recent drive, on sol 569, put them within view of Kimberley! Here's a map of their recent progress: 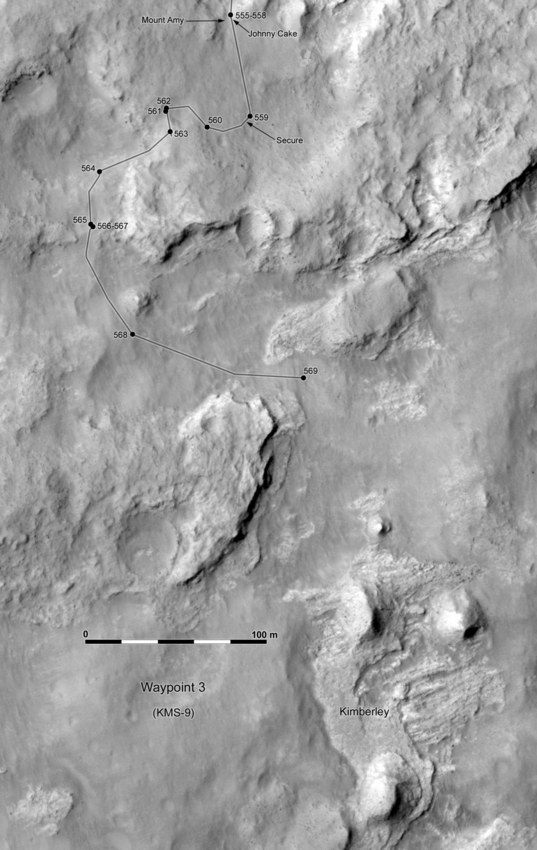 The Navcam view on sol 563 provides a nice overview of their progress out of the valley that contained the Kylie outcrop. You can really see how their path seeks sand and avoids rocks.

After a drive on sol 563 (March 7, 2014), Curiosity stood on a high point that gave her a good view into the valleys she'd been cruising for the previous week. The dark tracks in the sandy valley bottoms clearly steer around rockier hills.

Here are Ken Herkenhoff's most recent updates, though, like I said, he didn't have much science to discuss:

After I finished my SOWG Chair shifts last week, I took some time off to celebrate my son's birthday. While I was away, the MSL planning schedule transitioned into "late slide sols" because data from the rover arrive late in the day Pacific time. In order to preserve the ability to send commands to the rover every day, only driving was allowed on these slide sols. This allowed continued traverse progress over the weekend, but very few science observations. Unfortunately, the Mars Reconnaissance Orbiter (MRO) suffered an anomaly Sunday that interrupted the relay of data from MSL to Earth. Therefore, the drive planned for Sol 567 was cancelled and targeted ChemCam and Mastcam observations of nearby rocks were planned instead. MSL data are typically also relayed by the Mars Odyssey orbiter, so rover operations can continue while MRO is recovering, but with more limited downlink volume.

MRO is still in safe mode, but enough data were received via Mars Odyssey to allow another drive to be planned on Sol 568, about 70 meters. Again, the data were received late in the day Pacific time, so there was not enough time to plan science observations beyond the standard background and post-drive imaging.

Sol 569 Update On Curiosity From USGS Scientist Ken Herkenhoff: Toward "The Kimberley" (14 March 2014)

The rover moved about 74 meters on Sol 568, and a ~100 m drive along the path toward "The Kimberley" (shown on image) is planned for Sol 569. Mars time continues to shift later relative to Earth time, so no planning is scheduled for Sol 569 to allow a full weekend plan to be developed tomorrow.

Finally, with sol 570, the Martian calendar slipped a full day against the Earth calendar; that was a runout sol on Mars, and as of sol 571 the mission will be back to "restricted sols" for a while. (Restricted sols happen when each day's downlink comes so late in the Earth planning day that they wind up with a one-sol delay between when they take images and when they can use them for planning, so they only get to do driving and targeted observations every other sol.)

They are very, very close to Kimberley. You can see the rounded knobs of Kimberley clearly on the horizon in this panoramic view from sol 569.

In this image, there are four distinct knobs. The second one from the left is not part of Kimberley -- it is located closer to the rover than Kimberley. The one at far left is part of the Kimberley outcrop, as are the two at far right that overlap. Curiosity will be headed to the left of the leftmost one and will drive up to Kimberley from the east (left).

If you zoom in on the photo, you can clearly see that there is a lower, thinly-layered unit and an upper, darker, more massive unit; much like we saw at Shaler and Point Lake back at Yellowknife Bay. These rocks may not be all that different from the ones we've explored before. But it's the nicest-looking rocky outcrop between here and Murray Buttes, so we're going to stop and stay a while to check it out!

This week the science team will be somewhat thinned by the fact that they are presenting results to the Lunar and Planetary Science Conference. However, a couple of scientists who'd planned to attend LPSC are staying back at JPL to prepare for an intensive science campaign at Kimberley, in particular, Melissa Rice, who is leading the Kimberley effort. I've been told they're looking at a campaign that will likely take four weeks at least. The way things tend to work on this mission, though, I expect it'll be mid-June before they depart! Unless they drive up to it, take a look, and decide it's not worth stopping....

Re: sol 569 panorama What do you suppose are the long low "dark sandbags" to the upper left and "plain sandbags" more to the center? Harder rock eroded less than its surroundings? On earth, wouldn't that typically imply layers set at an angle to the ground? Would Mars have complex layer folding and tilting without tectonics? And what's the dark "dry lakebed" in the background? I guess we'll find out!