I've seen this cool data visualization in operation on several visits to the Jet Propulsion Laboratory, and I'm delighted to finally see it in action in public. Check out the "Deep Space Network Now" page at JPL's Eyes on the Solar System to see just who the many antennas of the Deep Space Network are talking to at this moment. When I checked, minutes ago, Madrid was talking to a distant solar observing spacecraft, ACE. Goldstone's giant antenna was tuned in to the incredibly faint signal from Voyager 1, and a smaller dish was pointed at the not-quite-so-far-but-still-distant Rosetta, still waking up from its lengthy hibernation. (I love the fact that Rosetta is abbreviated "ROSE".) Meanwhile, Australia's dishes in Canberra were extremely busy talking to Mars and Mars-bound spacecraft, with the great 70-meter dish pointed at MAVEN and the smaller DSS-45 and DSS-34 dishes listening to Curiosity, Mars Reconnaissance Orbiter, Mars Odyssey, and Mars Express simultaneously. Click on the number below any of the antennas and you get a picture of the pointing of the antenna and information about the spacecraft it's communicating with. 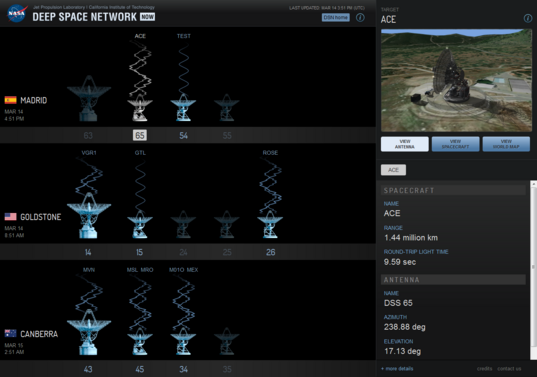 I happen to know that this project was the brainchild of Doug Ellison at JPL, though I also know it took a huge amount of collaboration with people all over the world to make this project happen. Now those of us outside the Deep Space Network can see, at any moment, just who is "phoning home" from across the solar system. Thanks to everyone involved for making this work, as we celebrate the 50th year of the Deep Space Network!

OMG... thanks Emily, that is just the coolest thing ever. I've often wondered which spacecraft were phoning-home and when and now it's all there on one page... hard work I'm sure but so well spent, kudos to all involved.

Yeah, this is great! Thanks for the link. I am searching the iTunes app store for a DSN Now link. The awesome dial was turned to 11 on this one.

Crazy to think that Voyager 2 (which Aussie site is listening/talking too) is just over a light day away. Astronomers use the unit light year all the time, but for us humans - we've only gotten as far as one light day! 364 more to go...

This post just gave me inspiration for another problem to give my math students. Given the GPS coordinates of each DSN location what is the highest altitude you can be located at and be out of contact (no line of sight) to the dsn? Too bad its finals this week. This problem will have to wait until next time.