Check out this unusual crater on Mars. It's not a very big one, less than 500 meters in diameter, and yet it has two rings. Most craters on Mars this size are simple bowl shapes. What's going on here? 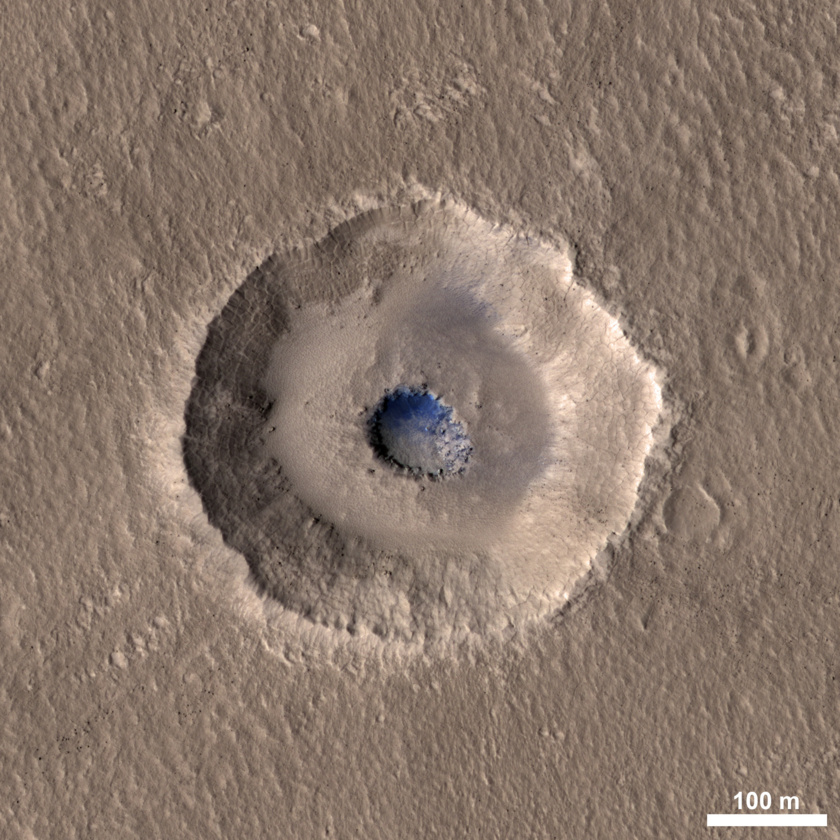 The terraced floor of this crater makes it look like a nested pair of craters. In fact, it is a clue to a layered subsurface.

One possibility is that we're looking at a nested pair of craters -- one happening to strike dead center in the middle of another. But that doesn't explain the otherwise flat floor of the larger crater, and requires quite a coincidence. Instead, it's more likely we're looking at a spot on Mars where the ground is layered. There's an upper layer with different mechanical properties than the lower layer. To oversimplify, the upper layer is weaker than the lower layer, so the impactor can dig a bigger hole out of it.

Here's another crater in the same region, with not two but three distinct layers. I cut the same-size piece out of a HiRISE image as the one above, so both pictures cover an area 700 meters square. 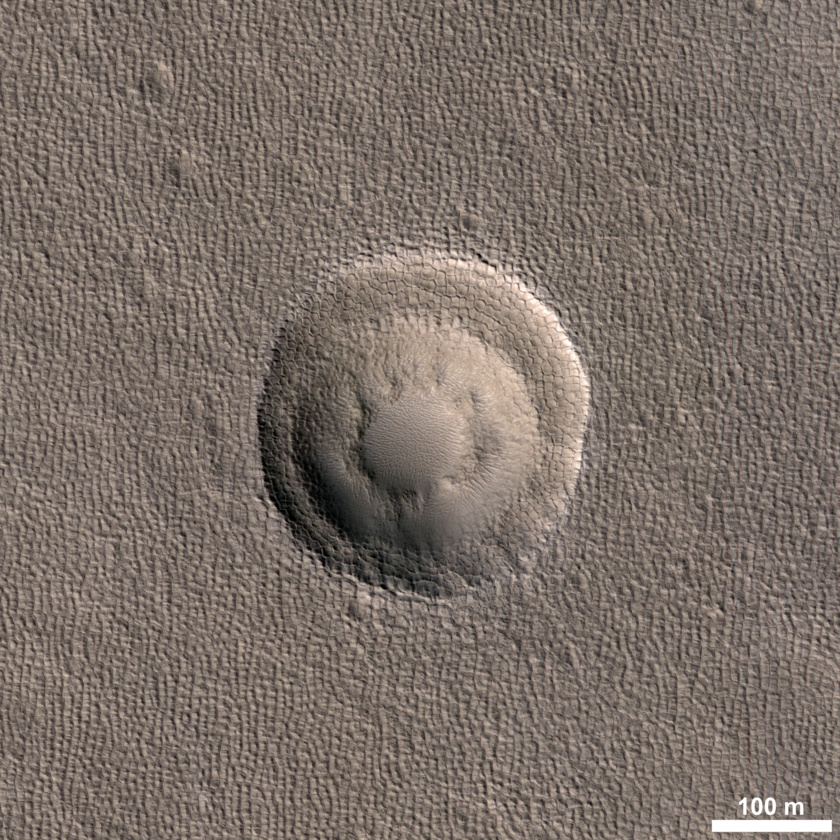 Terraced craters hint at subsurface layers in the Martian ground. This crater is in Arcadia Planitia.

Terraced craters aren't only found on Mars. They're on the Moon as well: 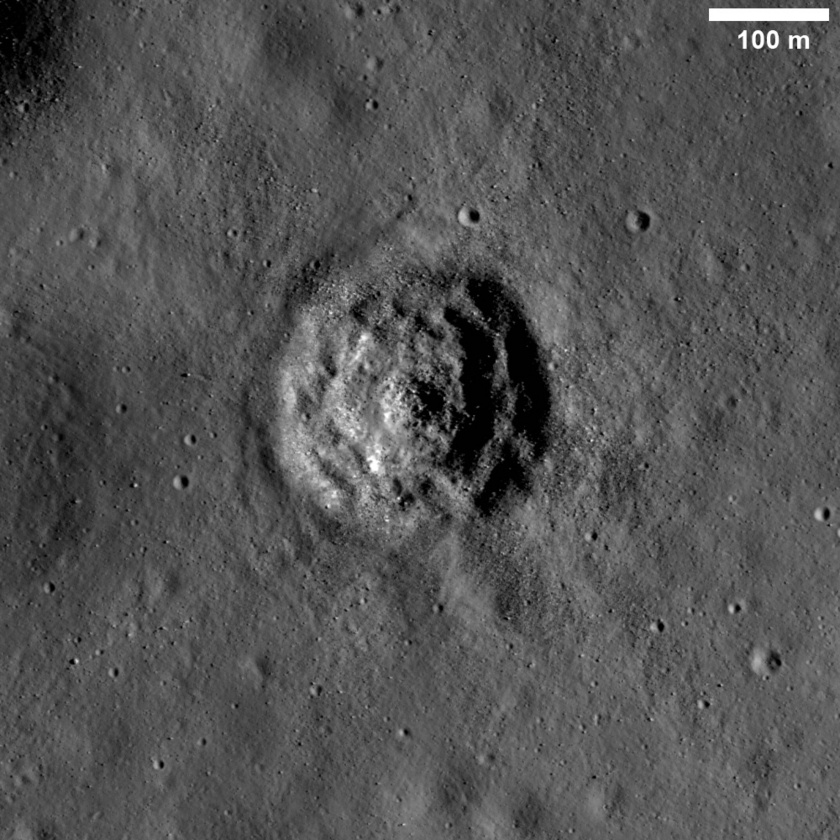 Terraced crater on the Moon

This crater has an unusual floor for its size. An impact crater of this size typically has a simple bowl shape, yet this example displays terraces and hummocks. The terraces give us insight into the impact material. A bolide that impacts a solid surface covered by loose material, for example mare covered by regolith, will use less of its energy to break up the loose material than solid material. The "excess" energy goes into excavating more material thus making for a larger diameter. Thus we see terrace at the boundary between the regolith and underlying more coherent material. The fact that the crater has no bright rays indicates that it is old - its rays have weathered into the background.

Can we learn something about what's happening underground from the depth to the different terraces? Here's a passage from Jay Melosh's 1989 textbook on Impact Cratering, talking about what terraced craters tell us:

Another way of looking at that: whenever you see a two-level terraced crater, you automatically know there's a layer boundary in the subsurface at something less than one tenth the diameter of the crater.

On the Moon, it's obvious what the weaker upper layer and stronger lower layer are: the upper layer is regolith (unconsolidated blocky material, the pulverized wreckage of rocks left behind by billions of years of impact cratering), and the bottom layer is consolidated rock. Studying terraced craters can tell you how deep the boundary is between regolith and rock.

On Mars, things are a little different; we don't necessarily know what the difference is between the different layers. It could be a contrast between regolith and rock, or it could be something else entirely. In the two craters that I showed you, there is smoking-gun evidence that ice is involved here. You can tell there is ice quite close to the surface in the two craters I showed you because of the polygonal patterns in the ground. Here's a detail view at full resolution. The ground outside the crater is polygonally patterned, and so is the first terrace, but the polygons peter out as the crater drops into the second terrace. After that, it's difficult to see what's going on because there are sand ripples filling the innermost crater. 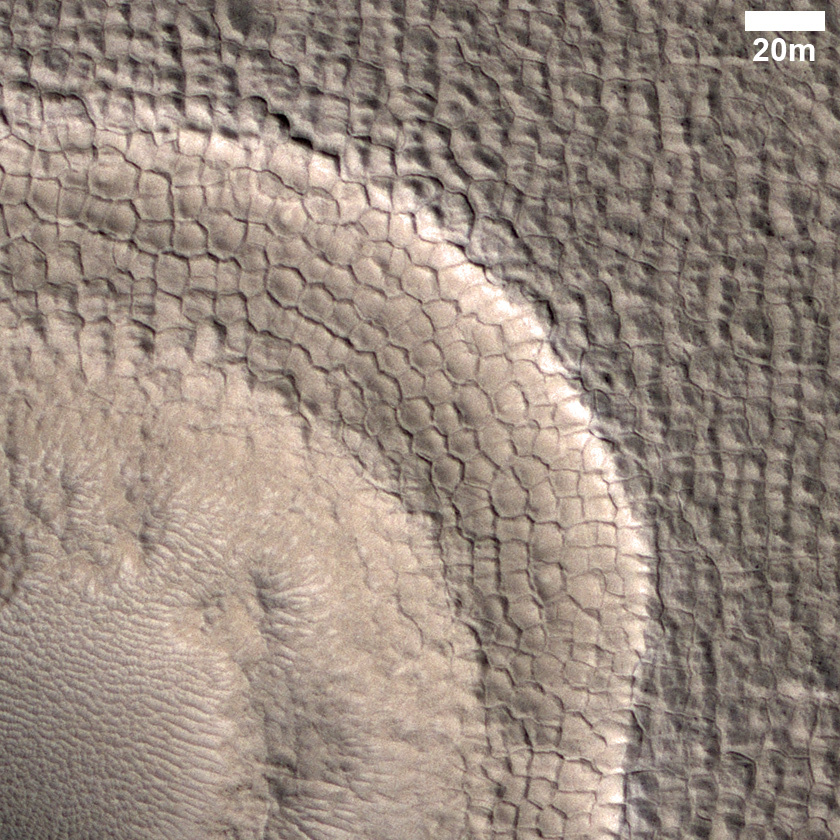 This kind of polygonally patterned ground often forms in permafrost environments on Earth, where thermal contraction breaks the surface into polygonal shapes and then ice wedges form in between them. Thanks to Phoenix, we know that at least some of these polygonal terrains on Mars actually contain quite pure ice in the polygons themselves, quite close to the surface. Here's Phoenix's view of its landing site, in the middle of polygonally patterned ground: 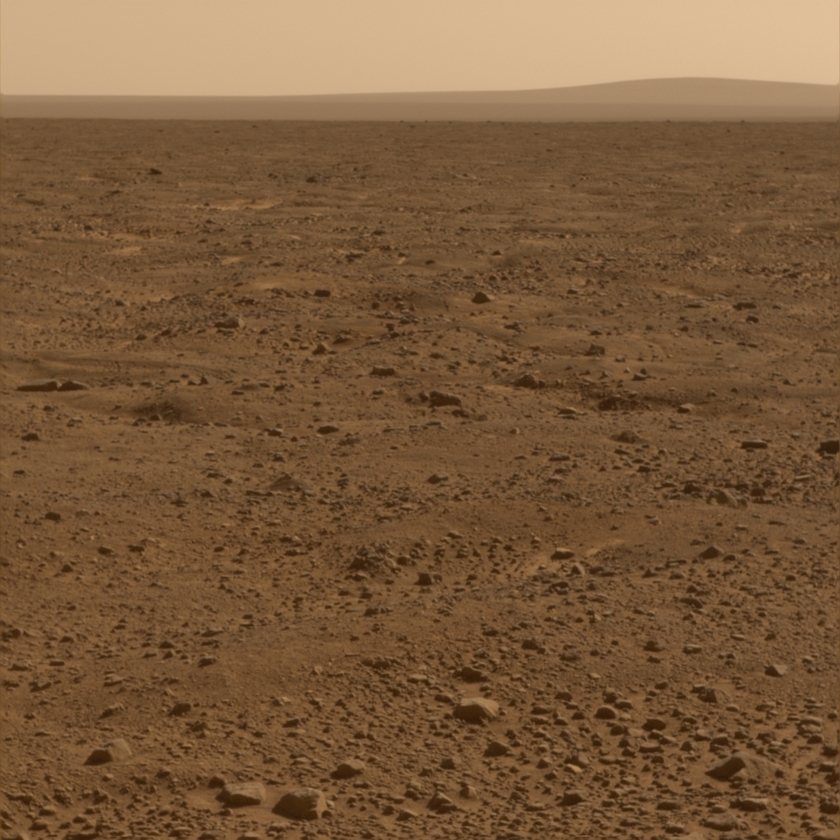 Polygons and distant hills at the Phoenix landing site

Phoenix captured this view to the south on sol 76. This image is processed from 6 individual images to closely approximate true color.

And here's what it looked like where Phoenix' descent engines blasted away a few centimeters worth of dry soil: 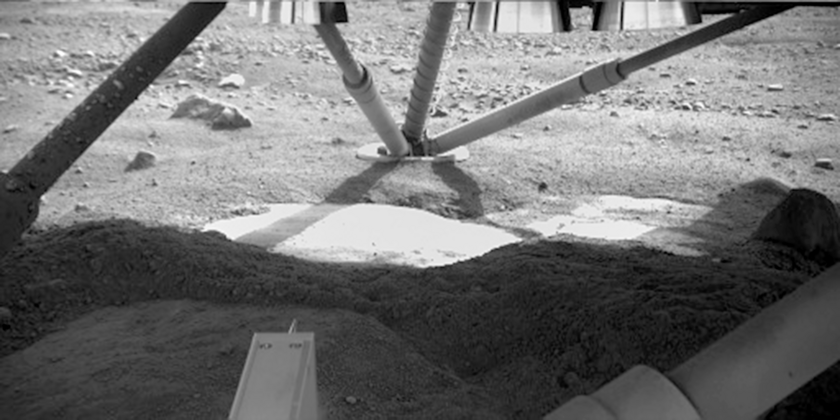 After landing in Mars' northern polar regions, Phoenix poked its Robotic Arm Camera underneath its belly to look at the positions of its footpads on the ground. The descent rockets had blasted soil away from the surface, revealing lenses of clean-looking, bright ice just beneath the surface. The team named this spot "Holy Cow" because of their reaction to the sight. This version of the image has been enlarged and brightened for print purposes.

These terraced craters are cool because they provide a way to check how thick the pure-ice layer is. The terraces form where material properties change, so they probably show you the thickness of the ice layer, right? Well, maybe.

The reason so many images of these craters are showing up is because scientists are using these pictures to ask these questions and figure out the answers right now. Specifically, Ali Bramson is working on this project as part of her graduate work with Shane Byrne. (Check it out, kids, you can do some pretty neat research in space before you even have a Master's degree, never mind a Ph.D.) You can see the progress they're making by reading two Lunar and Planetary Science Conference abstracts, one from last year and one that Ali will be presenting in a couple of weeks. So far, they've managed to show with the help of Mars Reconnaissance Orbiter SHARAD data that the upper layer is most likely fairly pure ice. However, they've also shown that in many cases there are terraces in craters within the ice-rich layer -- there's some change in material properties in the icy layer as you go down, "perhaps a change in porosity or dirtiness of the ice."

So yes, there's ice below the surface where we see terraced craters; but it's ice that varies in its strength for some reason as you go down. How? Why? We don't know. Which is a good example of how, in planetary science, a single study can both confirm a hypothesis and raise new questions!

Could it be that the different hardness layers provide a hint on the martian cryosphere, that is expected in some meters of depth? Above that a softer ground, and the ice layer below it freezes the ground very stiff? Regards - David

In addition to Davids' question, would added surface material/weight over time/depth, also cause the density differences through the layers thus helping to explain he differences? Also could the Roche limit effect of a body, if that broke a small body into, say 3 pieces, and they impacted in a train pattern within one or two seconds of each other, could that also create the layered cratering?

Those images clearly showing the polygonal structure of the Martian surface are simply stunning! The impact craters make them even more beautiful, thanks for showing them.