UPDATE Jan. 24: Contrary to what I wrote earlier, Curiosity is now going to drive toward this gap. More at the end of this post.

Over the last few days, Curiosity made steady driving progress to the southwest. For several of those days, an intriguing feature has appeared on the horizon in her images. It shows up in the center of this panoramic view from sol 519:

The break between two highlands near the center of this panorama is called "Dingo Gap."

They took a Mastcam view of it right after the Navcam one. Mastcam is a higher-resolution camera. It looks like a gate to somewhere:

Curiosity used her Mastcam-34 camera to take this three-image panorama of a gap between two headlands to the west of her position on sol 519.

Taking a look from orbit, you can see that it is, in fact, a gap between two headlands, and that sand between them is one isolated little sand drift standing guard athwart the gap: 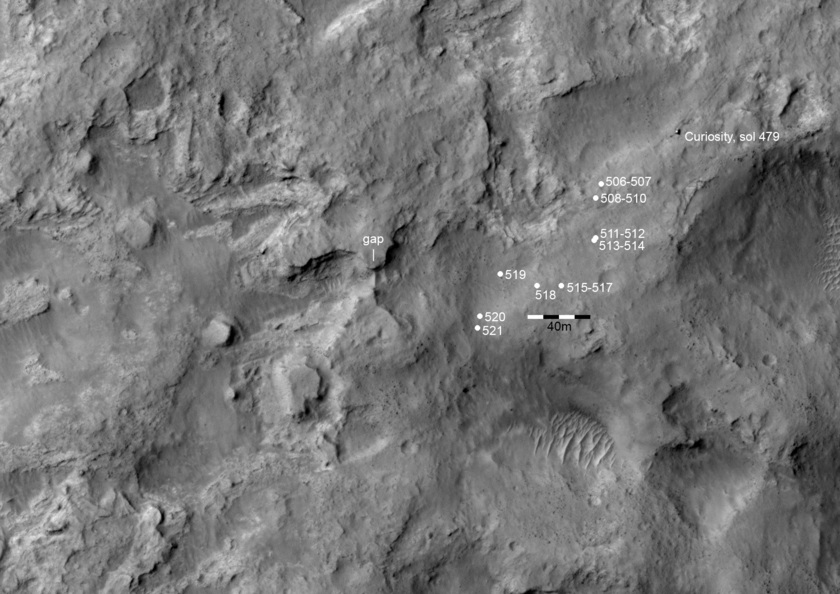 The base map is a view of Curiosity taken on sol 479 from HiRISE on Mars Reconnaissance Orbiter. Subsequent sol locations are based on maps by Phil Stooke.

A Mastcam-100 panorama from sol 518 shows that the sand drift is, indeed, an isolated one, with some fairly rocky-looking country beyond it:

Curiosity viewed a gap between two headlands to the west on sol 518. This view has been contrast-enhanced to bring out details in the foreground, washing out the view of the mountainous crater rim in the background.

It's a cool landscape feature, but rover science teams almost never take images solely because they are cool. They certainly don't take multiple images of the same thing just because it is cool. There is either a science justification or an engineering justification here. I asked deputy project scientist Ashwin Vasavada about this feature, and he told me that the images were taken because they were scoping the gap out as a possible westward route for the rover. It wasn't clear from the orbital images whether there was firm ground to the south (left) side of the sand drift that the rover could drive on in order to pass through the gate, so they took Navcam and Mastcam images of it to determine whether it was a safe route. But "it doesn't look too promising," he told me. Both the drift and the rocks beyond it pose potential problems. They're wary of sand drifts because of Opportunity's past problems with drifts, and they're wary of the large outcrops of rock that seem to close in on the level path through that gap, beyond the drift; they can't tell from orbit or from the ground if there's a safe route among them.

So they won't drive that way; they'll skirt around it to the south. But the reconnaissance and decision process has given us some pretty views of local terrain!

UPDATE Jan 24: It turns out that the team changed their collective mind about the relative safety of the terrain beyond the gap a few hours after I wrote this. The plan now is to drive the rover toward this feature, which has now been named "Dingo Gap." Here are more details, from Ken Herkenhoff:

Late yesterday, the strategic drive team decided that it would be best to head west, through the chute, because the terrain beyond appears safer for driving. So the Sol 522 drive (toward the south) was pulled from the plan and the rover stayed put. The plan for the weekend includes targeted remote sensing and contact science on Sol 523, wheel imaging and a ~24 meter drive on Sol 524, and a SAM measurement of the atmospheric composition on Sol 525.

Incidentally, these highlands and that drift are smaller than they look. The orbital view tells us that the rover was about 80 meters from the drift when she took the sol 519 photos. Mastcam images are 15 degrees tall in their 1200 pixels; the drift subtends 35 or 40 pixels. Do the math and you find that the drift is about 60 or 70 centimeters tall. If they had driven Curiosity through the gate, her mast would have periscoped above the headlands. She'll be encountering much, much more dramatic topography than this in the mission ahead.

Curiosity looked toward the distant goal of the foothills of Aeolis Mons / Mount Sharp on sol 517 with her highest-resolution camera on sol 517 to take this photo. The band of rocky ground at the bottom is close to the rover; the topography drops beyond that, and the band of dark sand dunes is actually several kilometers away.

Thanks for the photos and commentary!