The astronomy world is all a-twitter this morning over the discovery of a new supernova in M82, a galaxy that's in our astronomical backyard, "only" 12 million light-years away. And early word is that it appears to be a Type Ia supernova, the kind that's used as a standard candle to measure the expansion of the universe. According to Nick Howes at Remanzacco Observatory, "This is the closest supernova to Earth since the Supernova 1987A and the closest supernova Type Ia since SN 1972E." Even better, the discovery was made by students working with astrophysicist Steve Fossey at University College London. 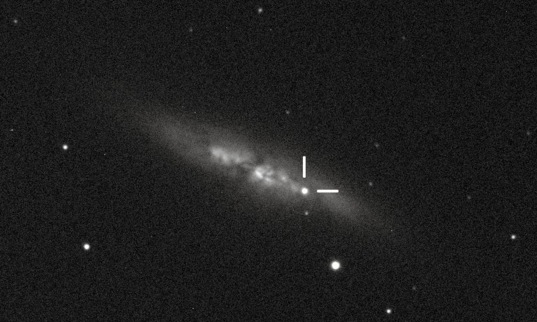 Remanzacco Observatory shared a nice pair of comparison images of M82 before and after the supernova:

This animation showing a comparison between the Remanzacco Observatory's confirmation image of the supernova in M82 (from January 22, 2014) and an archive image by the 2-meter telescope FTN - LCOGT (from November 22, 2013).

Supernovas are one kind of natural phenomenon that set me daydreaming. So enormous, so mind-bogglingly violent, this little flash could have destroyed whole solar systems, and sterilized many more. And yet out of their destruction, rebirth: the seeding of their galaxy with the heavy elements from which life-building molecules and planet-building rocks are made. Life out of death, annihilation begetting creation, the goddess Kali incarnate.

My daydreaming made me wonder: if we're receiving photons from this supernova, will we receive particles, now or in the future? I asked my astronomer colleagues on Twitter, and in short, the answer is no.

@elakdawalla I talked to the IceCube people, and the backgrounds are too strong - too hard to ID neutrinos from it.

@elakdawalla Which is too bad! I'm told we could distinguish between explosion mechanisms by neutrino counts.

@elakdawalla I think not. R^2 is a big big thing 12 million LY away. Also, I don't think material gets recycled between galaxies.

@DrMRFrancis @elakdawalla Any cosmic rays it produces could take >10M years and come from the wrong direction, so let's not plan on those.

@elakdawalla Ia give fewer neutrinos than II. @uw_icecube says "At the distance of M82, we can't pick the supernova neuts out of the noise"

Then this tweet from Space Telescope Science Institute's Max Mutchler made me sit up and take notice:

Progenitor of the M82 #supernova was probably detected in our 2006 @HubbleTelescope mosaic. Start digging: http://t.co/WW0C2U0lNR

Here's the Hubble mosaic. Click through twice to see it in all its 22 Megabytes of glory. But if you want to dig through to find the supernova's progenitor, it's best to start with the original data. 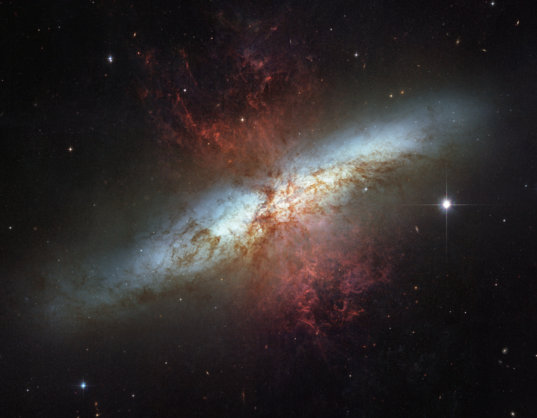 The Hubble Space Telescope captured this enormous mosaic of M82, located in Ursa Major, in 2006. The galaxy is remarkable for its bright blue disk, webs of shredded clouds, and fiery-looking plumes of glowing hydrogen blasting out of its central regions.

Astronomers are now asking for help from amateurs who may have imaged M82 in the last week:

It will help a lot, we'll include you in the publications! MT @chrislintott Astrophotographers - check images of M82 taken in the last week

Treat your astronomer friends kindly over the next few days, they may be especially sleep-deprived.

conkbonk: The supernova is 12 million light years away, and the fact that we're only seeing it explode today means that it exploded 12 million years ago.

A few words for those, who like to know a little more about type Ia supernovae: They are usually thought to be the result of the thermonuclear explosion of a white dwarf orbiting a giant close by. While expanding, the giant looses mass to the white dwarf, until the carbon of the white dwarf undergoes nuclear fusion in a runaway process. Supernova-types are distiguished by their spectra. More details, see http://en.wikipedia.org/wiki/Supernova.

From S&T comments. Having a web meet, and they have the SN in the background pic without realizing it was there! https://www.youtube.com/watch?v=ePOrciuULH0&feature=share&t=21m36s Getting binocs for the Red Spot out now....

Emily, I inadvertently took a photo of the supernova on Jan 15th at 23:45 MT. I would like to know how I can verify this, as I seem to have captured the SN a week before discovery. I may have it in the very early stages. Can you help me?

I understand why no neutrinos now, but anything from the gravity wave detectors ?

HST images before the explosion show no sign of a progenitor, as one would expect. See http://www.astronomerstelegram.org/?read=5789 Pre-discovery X-ray images from the Chandra space telescope likewise show no emission from progenitor: http://www.astronomerstelegram.org/?read=5799 MtnBiker, I can help you to verify that your image does or does not show the SN. Please contact me directly via E-mail: mwrsps@rit.edu.

This supernova took play 12 million years ago. This was a type Ia supernova. This is caused by a white dwarf orbiting a Red Giant star. The white dwarf pulls the outer ring of Hydrogen off the Red Giant. This increases temperature and density inside the core of the star. The temperature then reaches a high enough temperature to start nuclear fusion of Carbon. A large percent of the star undergoes fusion in a short time releasing a large amount of energy, which is too great for the gravity of the star to hold back, thus creating one of the most spectacular sights in the universe. http://hyperphysics.phy-astr.gsu.edu/hbase/astro/snovcn.html @conkbonk As you are correct in stating that a light-year is a measurement of distance, the twitter post by katie is also correct. A light-year is the distance light travels in one year. Thus if this supernova was 12 million light years away, the star exploded 12 million years ago as it took taht long for the light to reach us.