I have a really fun video to share. About two months ago, as LADEE was in its commissioning orbit at the Moon, I participated in an online chat with some members of the Lunar Laser Communication Demonstration team. This is an experiment on LADEE that was designed to test a new method of deep-space communication. Instead of radio waves, laser communication employs the rapidly flashing light of a laser beam to transmit information. It's capable of much higher data rates than radio. But the reason that laser communication is able to do this -- the tight focus of a laser beam, making it spread very little as it crosses interplanetary distances -- also makes it technically challenging, because the aim of the laser transmitter has to be perfect.

To demonstrate the laser communication, LLCD's principal investigator, Don Boroson, invited The Planetary Society to have a video conversation be sent to the Moon and back through the laser link. Actually, a conversation wasn't quite workable. The signal had to go from the team's headquarters in Massachusetts, to the transmitter in New Mexico, up to the Moon, be received by LADEE, retransmitted to Earth, received on Earth, processed, and sent from New Mexico back to Massachusetts; all these steps added up to about 7 seconds of delay. (The one-way light-time delay between Earth and the Moon is about 1.3 seconds.) So instead of trying a conversation over the Moon, we had a normal conversation between webcams on Earth, but then they established a lunar link (so you can see the 7-second delay in action), and then they played a canned video, recorded by Bill Nye, over the lunar link, to the Moon and back. And it was crystal clear HD video. Which was awesome.

In this video, you'll see me (based in Pasadena), Don Boroson (located with the LLCD team at MIT's Lincoln Laboratories), and LADEE mission manager Don Cornwell (located at Goddard Spaceflight Center). You'll also see Bill, in a pre-recorded video. And you'll learn a thing or two about lunar laser communication. I hope you enjoy it!

At one part of the video, the screen is split into three. These are three Webcams located in the LLCD operations center at MIT. The right-hand camera is on Don Boroson. Then there are two other Webcams located in the back of the room, which you may be able to see over Don's shoulder. Those are pointed at a different part of the room. One of these webcams is shunted straight into the video, and is labeled "Live." The other webcam's signal is sent over the lunar link and then into the video, and you can see that it has a 7-second delay. Bill's video gets played over the same link. 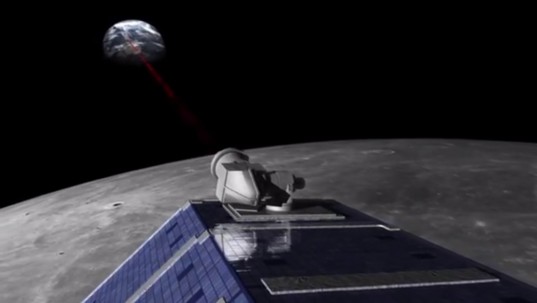