It was a tense half an hour for Rosetta fans all over the world as we waited for a spike in a graph to inform us that Rosetta had awoken from a 31-month slumber to phone home. But the spike -- indicating that a giant radio dish had detected the carrier signal from Rosetta's high-gain antenna -- finally came, informing us that Rosetta's alarm clock had worked, and Europe's flagship planetary mission was alive and ready to receive commands.

That spike is Rosetta phoning home. Welcome back! pic.twitter.com/AriQaBrdYq

Here's the moment, on video:

I was a little excited.

It was fun to see the relief and joy on the faces of the people at ESA's Spacecraft Operations Centre.

.@mggtTaylor is a little excited MT @NASASpaceflight: this #ROSETTA guy at ESOC is both relieved and overjoyed! :-) http://t.co/iz7PdZeATR

At the same time that the spacecraft phoned home, it began to tweet, and tweeted "Hello World!" -- in the European Space Agency's numerous languages. Programming joke! It also shared this adorable image. 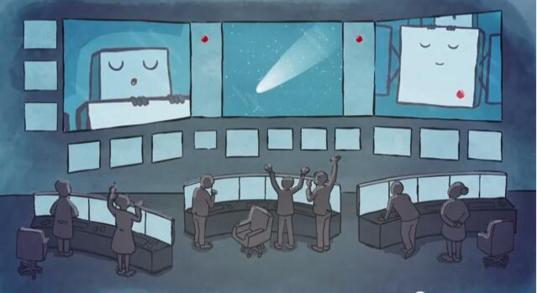 Just moments ago, ESA tweeted that they were receiving telemetry from the spacecraft -- so all continues to go well.

WE HAVE TELEMETRY: ESA is now receiving data from @ESA_Rosetta. Mission control analysing this to determine spacecraft health

Hmmm.. a couple of TM frames dropped... not serious... wait a bit

Telemetry lock back on... data coming in... clapping in Main Control Room...

#Rosettta Operations Manager Andrea Accomazzo has taken a look at the data... we look good!

What's next for Rosetta? Another four months remain before the spacecraft will finally sight the comet. An ESA press release explains:

...first, essential health checks on the spacecraft must be completed. Then the eleven instruments on the orbiter and ten on the lander will be turned on and prepared for studying Comet 67P/Churyumov-Gerasimenko.

“We have a busy few months ahead preparing the spacecraft and its instruments for the operational challenges demanded by a lengthy, close-up study of a comet that, until we get there, we know very little about,” says Andrea Accomazzo, ESA’s Rosetta operations manager.

Rosetta’s first images of 67P/Churyumov-Gerasimenko are expected in May, when the spacecraft is still 2 million km from its target. Towards the end of May, the spacecraft will execute a major manoeuvre to line up for its critical rendezvous with the comet in August.

After rendezvous, Rosetta will start with two months of extensive mapping of the comet’s surface, and will also make important measurements of the comet’s gravity, mass and shape, and assess its gaseous, dust-laden atmosphere, or coma. The orbiter will also probe the plasma environment and analyse how it interacts with the Sun’s outer atmosphere, the solar wind.

Using these data, scientists will choose a landing site for the mission’s 100 kg Philae probe. The landing is currently scheduled for 11 November and will be the first time that a landing on a comet has ever been attempted.

In fact, given the almost negligible gravity of the comet’s 4 km-wide nucleus, Philae will have to use ice screws and harpoons to stop it from rebounding back into space after touchdown.

Among its wide range of scientific measurements, Philae will send back a panorama of its surroundings, as well as very high-resolution pictures of the surface. It will also perform an on-the-spot analysis of the composition of the ices and organic material, including drilling down to 23 cm below the surface and feeding samples to Philae’s on-board laboratory for analysis.

The focus of the mission will then move to the ‘escort’ phase, during which Rosetta will stay alongside the comet as it moves closer to the Sun, monitoring the ever-changing conditions on the surface as the comet warms up and its ices sublimate.

The comet will reach its closest distance to the Sun on 13 August 2015 at about 185 million km, roughly between the orbits of Earth and Mars. Rosetta will follow the comet throughout the remainder of 2015, as it heads away from the Sun and activity begins to subside.

“We will face many challenges this year as we explore the unknown territory of comet 67P/Churyumov-Gerasimenko and I’m sure there will be plenty of surprises, but today we are just extremely happy to be back on speaking terms with our spacecraft,” adds Matt Taylor.

What a fantastic accomplishment! Congratulations Rosetta team. We can now hardly wait for answers to the mysteries to unfold. Keep up the good work. Ernest

For all of you members of the Rosetta team who studied math as youngsters, now that has paid off! Well done!

Congratulations Rosetta team! It blows my mind, in mid November we'll see pictures from the surface of a comet!