Next week I'm taking two trips to speak at two events. Registration is still open for both, so I hope some of you can come. Even if you can't, scroll down past the picture; I have a story to tell about what I'm doing at one of the conferences.

The first is the Society for Astronomical Sciences symposium at Big Bear Lake, California. I'll be speaking on Wednesday, May 22, at 8:50 am, delivering a talk based on my "Better Conference Talks" blog post. It'll be interesting to finesse that talk for an audience of people who are about to give their own talks and will not have time to incorporate any of my suggestions into their own presentations!

The second is Spacefest V, in Tucson, Arizona, where I'll be appearing three times on Sunday, May 26. My one-hour talk will be at noon, on "What's up in planetary exploration." I'll also be on two hourlong panels, one at 10:30 on Mars, and then I'm moderating one on outer solar system exploration at 4:30. All three are in the convention's "big room," where you pay $10 for each talk or panel you attend.

Spacefest is an odd duck of a convention, but it's fun. It is three things at once. First, it is a reunion of space artists (members of the International Association of Astronomical Artists), so there will be a gallery showing -- and selling -- works by Kim Poor (who, with his wife Sally, organizes Spacefest), Dan Durda, Michael Carroll, Carter Emmart, Bill Hartmann, Michelle Rouch, Lucy West, Alan Bean, and many others. Second, it is sort of a trade show of astronauts, with tons of Gemini, Mercury, Apollo, Skylab, and Shuttle astronauts, making appearances and signing autographs, for a price (usually around $100-200 per autograph). Third, it is a series of public talks and panels by working space researchers and science writers (this, obviously, is where I come in). Some talks are free with basic admission, but I'm in the $10 room. Kim has assembled a pretty amazing list of speakers this year, headlined by Brian Cox and Carolyn Porco, and including other folks like Phil Plait and Andy Chaikin and Rosaly Lopes and Britney Schmidt and Richard Cook and Chris Lewicki and on and on and on. It's held at a really nice resort in Tucson, so I'm making a family vacation of it. Here I am at Spacefest last year, during the evening event where people can pay to have their photo taken with every astronaut in attendance. They had a star party on the same patio later. 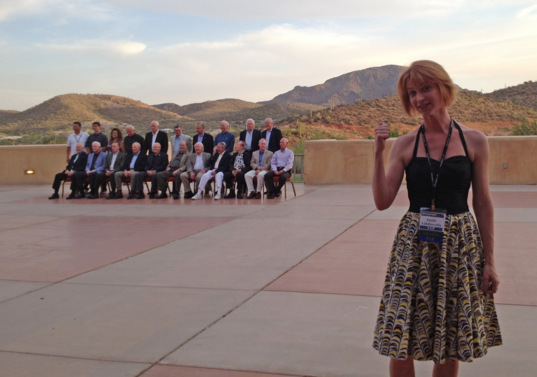 Emily and a lot of astronauts

Taken on June 2, 2012, at Spacefest IV in Tucson, Arizona. Numerous astronauts sat together on a patio at an event where conference attendees could pay to have their photos taken with the astronauts. (Three such people are at back left, standing next to Buzz Aldrin.)

Here's an interesting note on the meeting's organization: when I first looked at the list of panel discussions at Spacefest a month ago, I noticed that on three panels there was not a single woman. One was a panel of Apollo astronauts, so that's a good reason for it to be all men, but the other two were on asteroids and on Mars. I said to myself, why aren't any of the women speakers on these panels? And I looked at the list and noticed that out of 30-odd speakers there were six women (not ideal, but not zero). And that, apart from me, all the rest of the women on the list were people who primarily studied the outer solar system: Porco, Radebaugh, Lopes, Schmidt, and Young. Which (partially) explains the problem of woman-less panels and also suggested a solution that wouldn't disrupt the existing schedule or require that new speakers be invited on short notice. I contacted Kim and pointed out the lack of women on his panels and proposed an additional outer planets panel, which I could moderate, and which would naturally contain mostly (though not exclusively) women. Kim was responsive, and established an "outer limits" panel. And he also added me to his Mars panel while he was at it. To those folks who suddenly have an extra hour of work they have to do at this boondoggle of a convention because of my meddling, I apologize, but if it makes you feel any better, I got an extra two hours of work. It's work that I look forward to, though! These panels are full of smart, charismatic people who will be fun to talk with.

I feel quite good about how this worked out. I saw a problem, but rather than just complaining to my friends about it or being a jerk about it I went to the organizer and politely pointed out the problem and also proposed a solution, and it had good effect. It's not a complete solution, but it's a good incremental step in the right direction, and that's the way to achieve permanent change. A lack of prominent women scientists is kind of a chicken-and-egg problem. Women aren't represented in the public eye in proportion to their representation in the field. Their lack of representation is not because they're of poorer quality, it's because people don't think of them. With only a few exceptions (Porco and Lopes being notable on the Spacefest list) they don't get invited to give lectures or appear on TV or sit on panels because they're relatively unknown and because, unfortunately, both men and women are predisposed to think better of men than of women (there have been studies). The way to get known and recognized is to give prominent public lectures and be on TV and sit on panels. A convention in Tucson is, of course, not as public as being on CNN, but you have to gain experience and exposure speaking at more obscure events like this one before you can expect to be invited to speak to larger audiences.

Organizers of conventions would be wise to ask: who are the women who are as good as the men on my speaker list? Because here's the sad economic truth that you can take advantage of: a less well-known speaker is a less-expensive speaker. If it's true that there are awesome speakers out there who are less prominent only because they are women and not because of their quality, and I'm claiming that that's true, that means you can get awesome women speakers who are cheaper than equally awesome male speakers. Buying the same quality product for a lower price is a win. Yes, conferences depend upon speaker prominence to bring in attendees, but if you have as many speakers as Spacefest has, you can afford to look for these bargains. Especially if you have panels, where one or two prominent names on the panel can bring in your audience, and a couple of relatively obscure but awesome people may turn out to be better at pleasing the crowd. And that is why, ultimately, I thought that the lack of women on panels at Spacefest was important enough for me to do something about.

The disparity in fees ought not to last forever; once they've proven their awesomeness, the formerly obscure women ought to be able to raise their speaker fees to match their equally awesome male peers. (If the now-more-famous women speakers still can't charge as much, that means we're encountering a different aspect of the problem, actual sexism in setting the value of speakers on the part of either the conference organizer or, more troublesome, on the part of the conference attendees.) Still, if you can "discover" hidden gems of awesome women scientist or writer speakers who aren't enjoying the prominence that they should, you'll temporarily get a bargain.

Feel free to comment on this post with names of lesser-known women scientists who you've seen speak publicly who are really great at conveying both cool content and an infectious passion for their work. I'll start by throwing a few names out there of people I've recently seen speak: Sarah Hörst; Sarah Noble; Barbara Cohen; Pan Conrad; Alessondra Springmann; Kennda Lynch; Dorothy Oehler. Your turn!

Look forward to hearing you at the SAS symposium. I have made your "better Conference Talks" required reading for my students. Will see how well one of them paid attention tomorrow when he speaks!!