Here's a presentation slide I've been meaning to put together for a while. It shows the major moons of the eight planets, to scale with each other. Below is a labeled version. You can download one without text here, and if you scroll down I've got a couple of alternative layouts.

Note: it's been pointed out to me that the Callisto image is from Voyager, not Galileo. I'll fix the text on the image eventually. --ESL 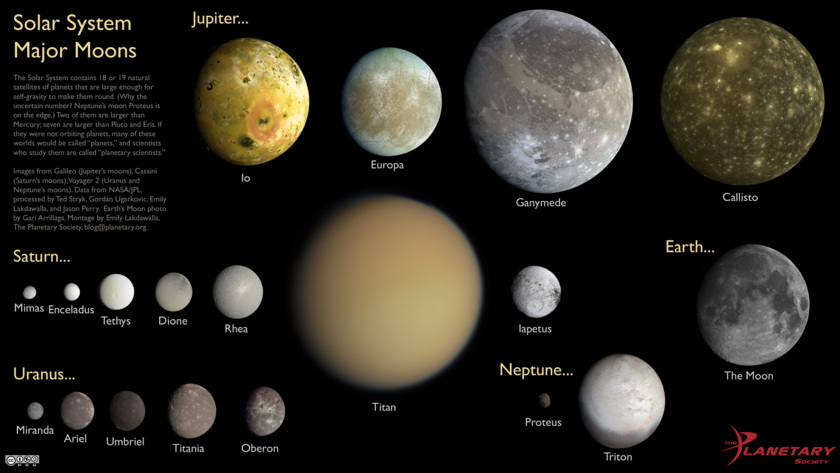 The Solar System contains 18 or 19 natural satellites of planets that are large enough for self-gravity to make them round. (Why the uncertain number? Neptune’s moon Proteus is on the edge.) They are shown here to scale with each other. Two of them are larger than Mercury; seven are larger than Pluto and Eris. If they were not orbiting planets, many of these worlds would be called “planets,” and scientists who study them are called “planetary scientists.”

Here are some alternative unlabeled versions: 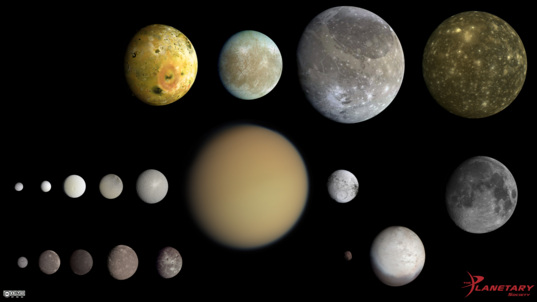 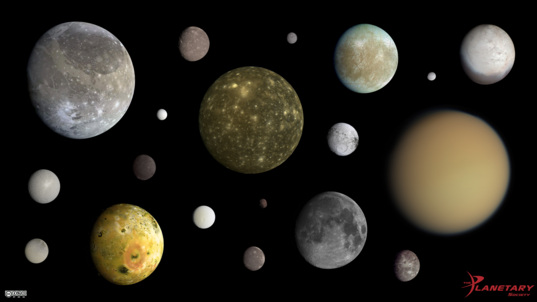 For the next one, I used a different Iapetus image, because it's adjacent to the Uranian moons Oberon and Ariel for which we don't have good lower-phase (fuller) global views; putting in the higher-phase one I used above made it look too big. Ganymede looks a little small for the same reason, and also because Titan's atmosphere makes it look bigger than it actually is. 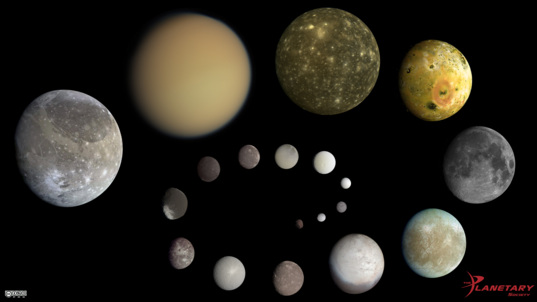 For shame! You should include Charon! See today's announcement from New Horizons!

Bill is quite right. if Proteus, Mimas, Enceladus are 'major moons', then Charon surely is too (it is immaterial that Pluto is not a planet).

A beautiful montage. Every other image I've seen comparing satellites to scale shows Titan with its atmosphere as being smaller than Ganymede, which is incorrect. Are the images corrected for relative brightness? The Moon (Luna) has a lower albedo than Callisto, but it appears brighter in these montages.

These are inspiring!! Are they available as posters?

Phobos and Deimos of Mars are both left out?

Michael, Phobos and Deimos aren't "major moons": large enough for self-gravity to make them round.

In my opinion, we don't have images of Charon that would be appropriate for inclusion in this sort of slide. Hopefully we can revisit that question in 2015.

I'm glad people like these! @Bill: If you travel to the future and bring me a New Horizons photo of Charon that I can use in this poster, I'll add it. Otherwise, you'll have to wait. In 2015 I plan to make a slightly different poster, "The Not-Planets," which will include all of these objects plus Ceres, Pluto, and Charon, with a companion version that includes outlines for a few of the better-known TNOs. (There are approximately 200 TNOs of this size.) Alson: I did not make any real effort to do correct relative brightness. The Moon, Titan, and Iapetus should all be darker, for sure. I may attempt a version that attempts this some time in the future. AlgebraWinter: I have learned to wait for people to notice errors before setting up posters for sale.

It says we can download these here, but I can't see a link? Do we just 'Save As'?

"The Solar System contains 18 or 19 natural satellites of planets that are large enough for self-gravity to make them round" I'm uncomfortable with the use of the word "round" on this page. Don't you mean "spherical?" As far as I understand, Eris and Houmea are "round." Or to be more precise, disc shaped. Please clear this matter up