Woo hoo! Some good news from the LADEE mission late this Friday, in the form of a "Project Manager Update" posted on the NASA website:

The LADEE Observatory has completed the checkout phase of the mission, and is now in the cruise phase on the way to the moon.  We are currently in elliptic orbits around Earth, called phasing loops, and will continue with two more of these elliptical orbits until LADEE is captured around the moon using an initial Lunar Orbit Insertion (LOI-1) burn on Sunday Oct. 6th.  After that we are in lunar orbit.

The major activities this past week included testing the LADEE main engine for the first time.  This was done in a maneuver called Apogee Maneuver-1 (AM-1).  We originally planned to perform AM-1 on Tuesday, Sept 10, but when we were doing thermal conditioning rolls prior to AM-1, the spacecraft went into Safe Mode because of a combination of the roll rate and an alignment error between the two star tracker camera heads.  We cancelled the planned AM-1 while we worked on the issue, and rescheduled it for the next day.  The alignment calibration of the star tracker heads was updated, the thermal roll rate adjusted, and the revised AM-1 burn was successfully completed 4 p.m. PDT Sept. 11.

With that AM-1 test burn completed, we were then ready for the Perigee Maneuver-1 (PM-1) on Friday, Sept. 13.  This maneuver was designed to increase the altitude of the elliptic orbit, to get the spacecraft closer to the moon.  That burn was successfully completed at 9:36 a.m. PDT.

There was a little bit more information about the Perigee Maneuver posted on the @NASALADEE Twitter feed:

Flight Dynamics preliminarily reports that it was a good burn, and will confirm later in the orbit through ranging.

The spacecraft is back in Fine Pointing Mode, and did not go into safe mode before or after the burn.

The spacecraft also successfully went through its first eclipse, and operated as expected. 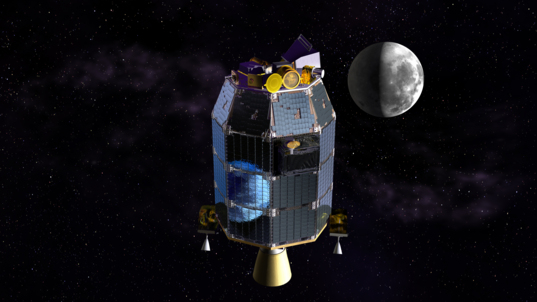 LADEE on the way to the Moon