The launch of ISRO's Mars Orbiter Mission has been delayed by about a week due to bad weather in the Indian Ocean. The new launch date is November 5 at 14:36 IST (09:06 UTC / 01:06 PST). Their launch opportunity stretches to November 19. A couple of weeks ago, ISRO put a lot of images on its website showing the assembly of the spacecraft and its launch vehicle: here's one showing the PSLV stacked and waiting for the spacecraft. I put all of the rest of them in an album on Flickr. 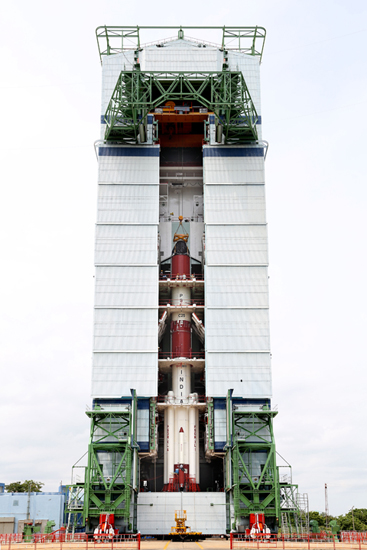 PSLV-C25 after the integration of all its four stages at Moible Service Tower in Sriharikota.

The weather is not a problem for the launch site; the problem is with two ships that India has deployed to Fiji to perform tracking of the spacecraft after its launch. One of these, Yamuna, has reached Fiji but weather has delayed the other, Nalanda. According to ISRO spokesperson Deviprasad Karnik, the ships must be positioned there in order to track the ignition of the fourth stage and separation of the spacecraft.

The spacecraft was reportedly integrated with the rocket on Sunday, October 20, and the "heat shield" is closed, according to news reports. I am interpreting this to mean the rocket fairing now encapsulates the spacecraft.

Here's a neat detail from a Deccan Herald article:

An NDTV journalist, Pallava Bagla, has posted several videos of brief interviews of the science team on the Mars Orbiter Mission. Here's one video interview of Ashutosh Arya, the scientist responsible for the Mars Orbiter Mission's color camera. In it, he says they plan to image Mars on approach. Once at Mars, he said, they'll have a close pass by Phobos (at a range of 6000 kilometers), so they hope to image that in addition to their planned imaging of Mars.

I exchanged emails with Arya to ask whether they will also manage to image Deimos. I'm interested in that question because of the Mars Orbiter Mission's unique elliptical orbit, which will have an apoapsis 80,000 kilometers above the planet. This is far above Deimos' 25,000-kilometer orbit, which means India's spacecraft is the first since the Viking Orbiters that will at least theoretically be capable of imaging the far side of Deimos. Unfortunately, Arya told me, "it's not in our plan so far." That's okay. Just arriving in orbit at Mars with a functioning spacecraft will be, in my view, a signal achievement for India. The rest is gravy. I wish them the best of luck.

Various articles in Asian media have been discussing this spacecraft in a wider context of a "space race with China," suggesting that the push to develop the Mars Orbiter Mission so quickly is a direct result of the launch failure of Phobos-Grunt and its secondary payload, the Chinese Mars orbiter Yinghuo-1. There's an excellent article on the Asian space race from the BBC, too. Such competition can serve to drive both success and failure, as the U.S. and U.S.S.R. saw in their own space race.

The "race" articles are interesting. Anything that stimulates a race between India, China and Japan to destinations like Mars has gotta be great. As we saw in the past, it's only a "race" which truly gets gov'ts to put their hands in their pockets bigtime. Once these nations show any sign of looking for life on Mars or the outer Solar System moons, we're likely to see a large upsurge in spending by the US, Russia and Europe on those destinations. Go China! Go India!

Good luck India and thanks for carrying Dr. Bruce Murrays' idea {camera(s)} on your spacecraft! I can't wait to see what you see!

Dear Emily, thanks for update regarding MOM, As an Indian, i know this mission is important for us, and i also agreed that we are not scientifically capable like NASA, Roscosmos and ESA. As per a senior editor, you should not use a sentence "it seems unlikely that a mission can be built and tested properly so quickly. I gain nothing by predicting delay or doom.". (You have written one article just one year ago), and also showing disinterest because, you did not get any photograph related to Mangalyaan project. I would like to explain, why you are unable to get necessary document or photos, because we don't have more qualified secret agency like FBI or Mossad. To keep secrecy, Indian scientist should have limit. Some saying, it is nothing but a race between China, Japan and India. If it is a race than i will say it is better than a war. I hope you know how much we are facing tarriest attack and LOC problem from Pakistan and China. I want all countries should race in science...

Yay! Good wishes for a successful launch to ISRO. The comment about the name of the day of the week (Mangalwar) is interesting. All the names of the days of week in most Indian languages are derived from Sun, Moon and the naked-eye-visible planets. This is largely because of the Jyotish system of astrology that is still prevalent across India. So the English names and the corresponding Hindi names are: Sunday - Raviwar (day of the Sun [Ravi]) Monday - Somavar (day of the Moon [Soma]) Tuesday - Mangalwar (day of Mars [Mangal]) Wednesday - Budhwar (day of Mercury [Budh]) Thursday - Brihaspatiwar or Guruvar (day of Jupiter [Brihaspati or Guru]) Friday - Shukravar (day of Venus [Shukra]) Saturday - Shaniwar (day of Saturn [Shani]) Interestingly the planet Mars (i.e. Mangal) is considered inauspicious in Indian astrology if it is in a certain position on your astrological chart. It is common for prospective brides and grooms to check the astrological charts to ensure that they don't have Mangal in an inauspicious position and do some rituals to propitiate the gods. It is kind of sad that while we as a country are in a position to send a spacecraft to Mars, a large portion of our citizens still continue to believe in the astrology bullshit and waste time and money on it.

Thanks a billion, Emily! It surely will be a proud moment for Indians on 5th November 2013. You were the first to highlight the Indian space endeavors Chandrayaan and Mangalyaan. I always enjoyed your writing and look forward to it each day. It is a bit of a surprise that you have gathered so much information and photos about the Indian Mars Orbiter while there is scanty publicity in the Indian media. Here's hoping that MOM ( Mars Orbiter Mission) successfully fulfills the mission objectives. Thanks to Planetary Society and you.

Thanks, Vijay! It's a reporting niche I'm happy to fill.