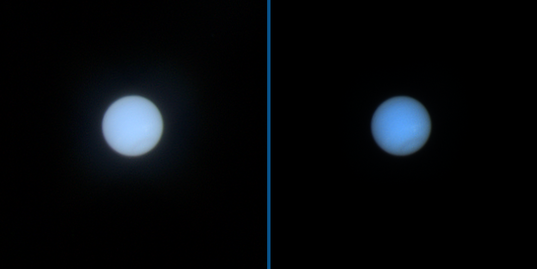 Hello Everyone, We probably don't have any idea but... Would the fluid dynamics at Uranus & Neptune behave the same way as at Jupiter? (Andrew Ingersoll had a great article in Scientific American on Jovian fluid dynamics, post Voyager/Jupiter). Sorry I forgot when it was published. Thanks. Have a pleasant day.

Interesting planets that deserve more attention. Two things I'd be interested in knowing more about: (1) The amount of activity visible on Uranus has apparently steadily increased with time. A comparison with the Voyager 2 images is especially striking (even though it's inaccurate since Voyager 2 didn't have near infrared imaging capability). Is this apparent increase a 100% real feature or at least partially due to the groundbased instruments getting better as time passes? (2) Regarding future exploration, wouldn't Uranus and/or Neptune flyby missions make sense? As far as I know mainly orbiters have been studied but due to the budgetary environment there must be decades until an orbiter could reach one of these planets (or even decades until an orbiter could be launched). Flyby missions would be much cheaper/quicker and would return less data but a flyby mission is better than no mission, also such a mission could return far more/better data than Voyager 2 (modern instruments, large onboard data storage etc.).

Here is an unpopular idea (honestly): why not use a "cheap flyby" class S/C ("Herschel"), to swing a couple of orbits around the planet and then plunge in and let the science package transmit real time to failure. Low cost, short duration end of design life mission type) S/C 2 would fly to Neptune and repeat. If some instruments based upon VGR findings out there are onboard, then a fling outbound with a gravity assist from each planets location could be applied. Uranus would be almost perpendicular to the Neptune fling out thus 2 different planes of departure.

Thank you Emily & Heidi for a great webcast. Uranus is my favorite planet. I am intrigued by Neptune also. I've been "Mars-up'd", as in tied, way to long that I did not realize 7 & 8 are now known as ice giants! Whoa!! ...been Mars bound way to long! I need to resume looking out the window!! LOL!!

Based upon the webcast and not being a fluid dynamics person, I'm going to hazard a guess and say the fluid dynamics would not be the same in a gas giant as an ice giant.