Book Review: Alien Seas, and so much more

Alien Seas is ostensibly a book about "oceans in space," but it delivers so much more. The slender volume contains essays by many active planetary scientists who also happen to be excellent writers, each one of them playing a different riff on the idea of oceans in different environments in the solar system. 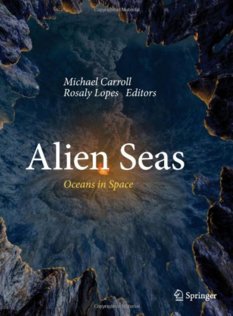 It seems like a niche topic -- after all, where is there actually liquid water in the solar system, except on Earth and inside some icy moons? -- but most of the writers interpret the concept of an "ocean" broadly. In so doing, they each deliver an up-to-date yet concise and accessible summary of the state of planetary science for each different kind of world in the solar system.

On top of all of that, the volume is abundantly illustrated with both well-selected photos and lots of artworks by Michael Carroll, who, along with volcanologist Rosaly Lopes, edited the book. And, with a list price of $29.99, it's cheap. This is an excellent gift book for the space enthusiast in your life, or even for a science-obsessed high school student. This book could be an inspiration to flights of science fiction fantasy -- imagine descending into the fluid-hydrogen ocean of a giant planet, where diamonds fall like snow! -- or to initiate an interest in the latest developments in real-life planetary science.

Just look at who contributed chapters:

I have so many more books to review -- I will try to post a brief roundup tomorrow. But this book tops my gift list, so I wanted to get to it without any further delay!