Reviews of toys for kids of space geeks

My older daughter is now 7 and it is getting increasingly fun to buy toys for me, *ahem* I mean her. Here are a few toys that my kids have enjoyed. Not all are space-themed; some are just engineering fun. If you'd rather buy kids books than toys, you may enjoy my recent reviews of space-themed books for kids.

is a standalone kit -- you don't need any other Snap Circuits kits -- that provides much of the same introduction to electronics as the basic kit does, except that you build the circuits on the back of a rover chassis that you can control remotely. The relationship between the electronics lessons and the rover mobility is not always obvious, but who doesn't like being able to build a remotely-controlled rover that can fling foam disks at interlopers? The instruction book guides you through 63 different projects, many of which are incremental changes to preceding ones. They suggest ways to build and then modify circuits so that you can see how adding or swapping out different components changes the behavior of the circuit. My daughter has not yet gotten into creatively modifying the circuits; at 7 she's a bit younger than the toy's target age. But she can follow the project directions like a cookbook and she's learning what parts are called (to the point that she can now point out resistors and "compacitors" [sic] inside a box of electronic components), and she enjoys seeing the behavior change when she follows the directions to change the design.

Note: the Amazon description of the product is inaccurate -- the Snap Rover has no ability to track lines, has no infrared sensor, and is not programmable. I'm not sure what product it is describing, but it is not the Snap Rover. The Snap Rover is a motorized breadboard on which you can build circuits. It comes with components that include LEDs as well as a remote control receiver, voice recording, and sound-generating integrated circuits. The difference between the regular and deluxe versions is the foam disk shooter. I recommend the deluxe version, as the remote-controlled disk shooter is super fun.

In the past I have positively reviewed the Aeromax astronaut costume, which is available in sizes from small kids to adult. This year my 4-year-old agreed to be an astronaut for Halloween if I accessorized her costume. How could I resist? I purchased the gloves and backpack

, while her grandmother got her the boots. After reading reviews that said the matching helmet was too large, I bought this very cheap helmet.

The best accessory is the backpack -- it's suitable for actual use as a backpack, with better-padded straps than are on most kids' backpacks. It's not configured well for a book bag (the interior is divided into an upper and lower section, rather than front and back as in a book bag) but it holds all the rest of the costume gear very well; it's turning out to be useful as dress-up storage for us. The boots are sole-less costume gear that look pretty good if they're worn over sneakers, though unfortunately you can't put them on over sneakers that are already on a kid's feet. You have to start without shoes, put on the boots with feet poked through the bottoms, then put on the sneakers, then fasten elastic bands from the boots around the bottoms of the shoes to keep the boots in place. This is time-consuming but once they're on they look very good. The gloves look good as a costume accessory but not on my kids, because they are sized wrong. They say the small size is for ages 3 to 8 but I'd call it 8 to 12 -- they are almost large enough for my hands. My daughter couldn't grab Halloween candy while she had them on! The helmet didn't fit well but at least it was light so that when it wound up in the backpack for most of the trick-or-treating time, my daughter hardly knew she was carrying it. It could probably be made to fit much better with some upholstery foam hot-glued to the interior. 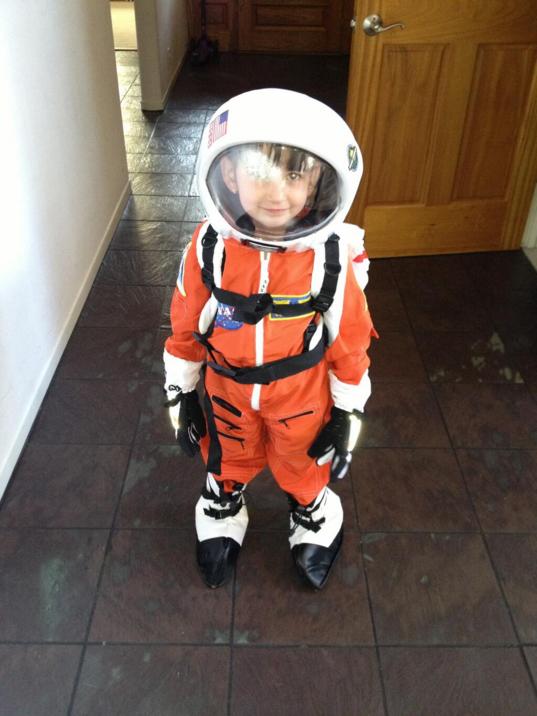 I have decidedly mixed feelings about Barbie. But I applaud Mattel for portraying Barbie in a wide variety of professional occupations through their "Barbie I Can Be" product line. They have reliably produced Astronaut versions of Barbie about once a decade since the '60s. They have two astronaut-themed products right now: a Barbie I Can Be Space Explorer Doll

, and an accessory Barbie I Can Be Astronaut Outfit

. I actually like the doll a lot because, unlike most other Barbie dolls I've seen, this one is fully articulated, with bendy knee and elbow joints. Its posability really adds to the play value. It comes with a backpack, which the outfit accessory costume does not. However, it is aggressively pink; even the little Mars Exploration Rover that's pictured on the packaging is pink. I don't mind some pink but it's a little hard to take a pink space helmet and boots seriously. And her space suit looks more like a Star Trek version of a space suit, or even a Power Ranger costume, than a real space suit. In contrast, the accessory astronaut outfit is mostly blue and white and slightly more convincingly space-suitish. Disappointingly, neither costume provides Barbie with gloves, which would seem to limit the utility of the suit! (Of the many Astronaut Barbies over the years, the only one ever sold with gloves is the original, as far as I can tell from squinting at product packaging.)

Like many of the dolls in the Barbie I Can Be product line, it is available in one of two ethnicities: either the traditional pale-skinned blonde or African-American. I bought the African-American version of the doll, which is still, it must be acknowledged, quite fair-skinned. It works well for my mixed-race daughters -- the doll's skin tone is actually a perfect match for my older daughter's suntanned olive skin. She looks different from the other Barbies we have, and it's nice to have that bit of diversity. My daughter has suited two of her dolls up in the costumes and blasted them off to various destinations -- the Barbie space suits certainly encourage her to play at exploring space. That being said, she spends more time putting Astronaut Barbie in fancy dresses than she does dressing her Disney princess Barbie dolls in astronaut costumes.

The Lift Off Rocket

is a fun play set featuring a rocket with lights and a sound (a man's voice saying "5-4-3-2-1-liftoff!" and a blast-off sound). It's big and chunky and durable so is suitable for babies and toddlers, but still occasionally fun for my 7-year-old. Doors open onto cockpit, living area, and a garage for a little rover vehicle, plus there's a separate "crater" with a three-eyed alien lurking inside. A handle on the rocket makes it easy for a kid to careen around the house with it, running space missions. I like the fact that it supports both active play (running around, blasting off, roving, exploring) and quieter pretend play (with two astronaut characters and a little space-suited dog and living quarters inside the rocket). The one drawback is that the bottom door -- the one that houses the rover -- comes off its hinges easily. It's just as easy to put back on, but until my older daughter learned how to replace it for my younger daughter, it was annoying to have to constantly repair the door. The other two doors come off, too, though less frequently. I assume it's a feature rather than a bug, as it's better for the doors to snap off intentionally and reparably than for rough play to break the hinges.

has really made a splash with its ads stating a company goal of "disrupting the pink aisle." Goldie Blox is a Tinkertoy-like building set including axles, blocks that grip the axles, spool-like wheels, and ribbons that can be wound around the spools to make pulleys. Each set comes with a book that is combination story and instruction book, with each of the two available sets exploring distinct simple-machine concepts.

I like the Goldie Blox concept a lot, but the play experience is not as good as the advertisement. On the plus side, the mechanics of pulling the ribbon to slowly unwind a spool allows my girls to really study how their actions cause other parts of the machine to move. It's a unique and cool building concept I haven't seen in another toy, which promotes the idea of building functional machines to solve problems laid out in the stories. My girls like the story-book concept to the instructions, and they like the little animal characters that can be added to the spools and set in motion. On the minus side, the blocks do not grip the axles very well, so Goldie Blox assemblies are extremely flimsy, and it is a very common experience that adding a part in one place causes another part to fall off, or even makes the entire thing fall apart. And I really wish that they put the same amount of effort into writing the stories that they do in producing their ads. The story books are in truly awful thumpety-dump verse that is painful to read and really unnecessary to the product -- if anything, being in verse seems to limit the appeal of the story books to a younger age than they need to be. On balance, my girls enjoy playing with Goldie Blox, so I still recommend the toy, but with reservations. I almost think the advertisement does a better job than the actual toy of encouraging them to view their environment as something they can modify through engineering. They have asked to watch this video over and over.

LEGO needs no product review; I just wanted to point out that the Heartlake High School set, part of the LEGO Friends product line, includes a science classroom complete with a telescope, Erlenmeyer flasks, microscope, and (for reasons I don't quite understand) an owl. It's pretty awesome. This is the second year of the LEGO Friends product line, and it's my impression that overall the second year of the line contains fewer pink elements, and there are twice as many (that is, two) sets containing male minifigs, including Heartlake High. (The other is the fun Dolphin Cruiser set.) My girls play with their LEGO (primarily, right now, the LEGO Friends sets) more than any other toy in our house, except one:

This is not a space toy, just a construction one, but I include it on my list because if you're looking for a construction toy for very young children, this is it. I recommend it higher than LEGO Duplo, particularly for 2- and 3-year-olds. Magna-Tiles are geometric-shaped tiles (mostly squares and triangles) with strong magnets hidden in their sides. They readily click together, just by being brought close to each other, to build three-dimensional structures. My younger daughter has been building mighty towers with them since she was 2, and now both girls build castle-like multi-story enclosures for their little animal figurines with them. These are used more in my house than any other toy -- even LEGO -- and because they are made of large pieces they're easy to clean up. You can buy sets that have a few specialized pieces, but my kids get more mileage out of stacks of the basic tiles.

Finally, I'll mention two toys that I don't yet own (because they are not yet in production), but am watching closely: Mod Robotics' MOSS robot construction kit, the second generation following their super cool Cubelets toy, and Play-i's Bo and Yana robots. Both are seeking crowdfunding, but neither will be available before Christmas.