The first burn was completed successfully just minutes ago, about 34 hours after launch. Since each new orbit is a little longer than the last, the next burn will not happen 34 hours from now -- it will happen some time later than that. I don't know when each burn is planned for; whenever I know, I'll tell you! 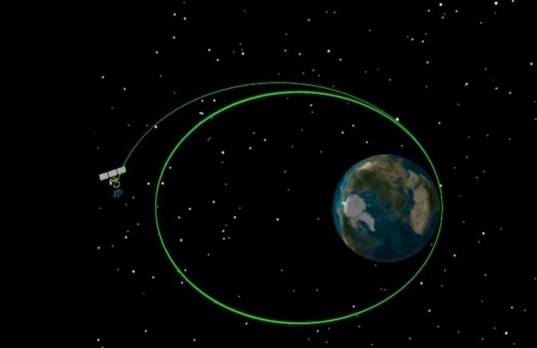 thanks for perfect info, hopefully it will go all the way at end as it is performing now. It is hard to find perfect story on net, since most of media worry about India's demography, media suggesting that if poor don't pay the electricity bill then poor don't deserve solar panel.

Thank you Emily. Congratulations to India! But I noticed not too many females (read: none) in the control room. Still more to do...

Thanks, Emily, for these timely updates. We all very much appreciate your simple graphics and lucid discussions of India's clever orbital tactics.

Here's a tracking link that I found on their Facebook page, posted by a commenter there: http://www.n2yo.com/?s=39370 The track shows it doing a loop, actually going backwards for a bit. I'm guessing that's because it's so high up, at it's apogee, and slowing down so much that the earth's spin overtakes it, relatively speaking. Just a guess. I'd love to be corrected! I have no idea why after the tracking loop the path veers in another direction. Thanks for another great blog post!

Thanks Emily on regular updates on MOM!! Hope India does well success from this mission..still a long way to go !

Typo error.. Read 'Hope India does well from this mission' from my last comment ! Thanks..

madhu and nat: thanks for the info!

@Fred Not sure what images you saw, but the ones I saw had saree-clad women in both the control room and the main hangar/warehouse room where the craft was stored before launch.

Will MAVEN follow a similar pattern (multiple apogee raising burns etc.)? If not is that because it is being launched on a more powerful rocket that is capable of launching it directly in the appropriate orbit towards Mars? What are the advantages/disadvantages of using the strategy that MOM is following?

Would the trajectory design used by MOM result in greater payload at Mars if used by MAVEN? Hohmann transfer orbits are supposed to be the best but are there others that are better if you trade off time to get to Mars for example?