It was well worth staying up late to watch the PSLV carrying the Mars Orbiter Mission soar off its launch pad today. All four stages of the launch vehicle performed right to expectations, placing the spacecraft into an elliptical orbit of Earth with a perigee of 246.9 kilometers and an apogee of 23,566 kilometers, extremely close to the predicted orbit. I was taken aback by how quickly the rocket shot into the air. I made an animated gif of screen caps:

Here's a nice video of the launch -- I would have embedded it but I couldn't figure out how to prevent it from autoplaying.

The challenges for ISRO are not over -- they have only begun. They have not left Earth yet. The spacecraft will now perform 7 orbits of Earth over the next 4 weeks, with rocket burns at each perigee to increase the height of the orbit, before departing for a 300-day cruise to Mars. I'll keep you posted as the mission continues.

And now, I'm going to bed! Congratulations to ISRO!!

OK, after a few hours' sleep, here's some lovely photos ISRO posted overnight from the launch: 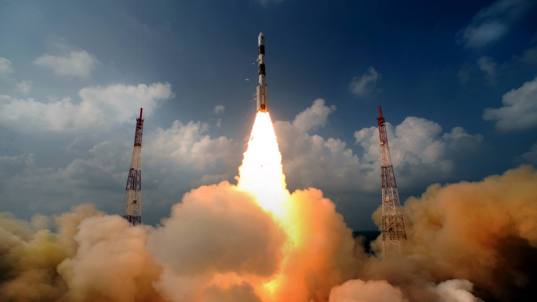 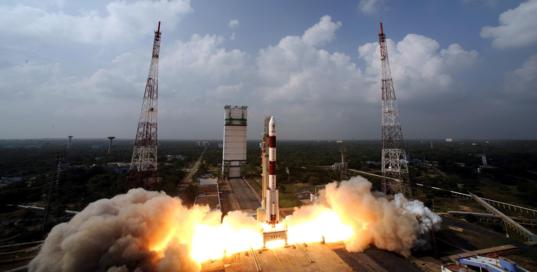 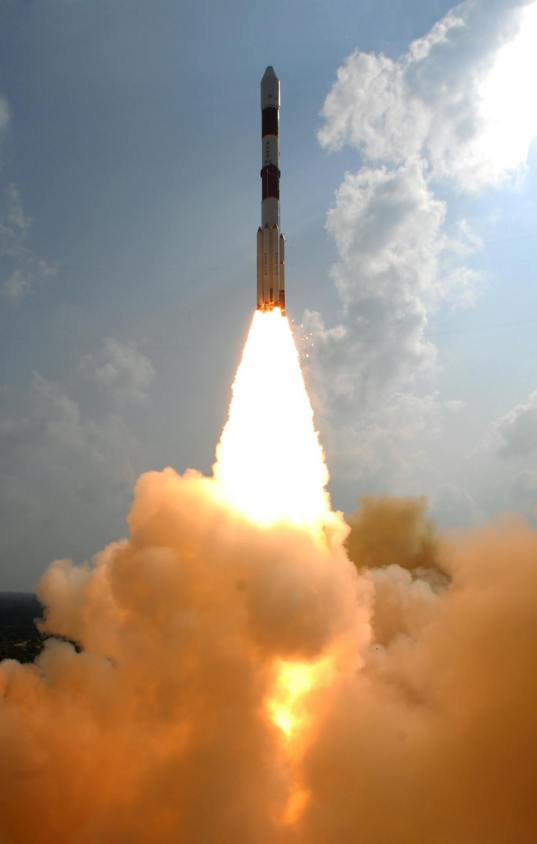 Kindly explain the difference in trajectory path followed by NASA's MAVEN in comparison with ISRO's MOM. Which one reach Mars first

Its not so much the trajectory that defines the arrival time but the launch vehicle. MAVEN is launching on the huge big stonking (technical term) Atlas V that propels it directly towards Mars . Poor MOM is launched by the puny PSLV and has go through several convoluted orbital manoeuvres before heading off to Mars.

Very exciting - congratulations to India and all involved. Mars beckons and getting more countries involved will lead inevitably to robotic Mars sample return and human exploration.

Yes, congratulations to India and I bet every Indian, rich and poor, is feeling a little taller today. Its fantastic that space exploration is still viewed as the technological mettle of a country and as the world's economy expands, barring the odd hiccup, more and more countries are getting in on the act. That robotic exploration of Mars now seems the future for these new explorers is pure icing on the cake.

Well, maybe not a very bright comment, but, was that whole lot of stuff falling from the rocket just condensation ice? Big plaques, isn't it?

Congratulations to ISRO ! God Speed, Mangalyaan to the Red Planet. My presentation on the mission at AIAA SPACE 2013: http://executive.mit.edu/resource/documents/IndianMarsOrbiterMangalyaan-AIAA-SPACE2013-Sundararajan.pdf

@Almir, The condensation ice gets cleaned up in first 5 seconds. The pieces you saw are the attachment cables and collapsible service platform which gets detached in early lift off. It looks scary but it is a standard procedure for all PSLV launches. You may find this consistent with other PSLV launches like this C-20 launch: http://www.youtube.com/watch?v=xXz4UgbG8Ks

Thats the difference between indian Engineering and others because ISRO have made it possible in just 18 months despite its first attempt mars,Where MAVEN consumed more than 5 years to come up..

Thanks for the great coverage of this mission, Emily. Ganesh: let's not compare the MAVEN and MOM missions. They have different objectives, different levels of complexity and were built in different environments. It is wonderful that ISRO has undertaken this mission, and given its overall objective of contributing to improving the lives of ordinary people (and the bulk of its missions are focused on that), at a reasonable and justifiable cost. I first started avidly following ISRO as a young kid in the mid 80s, with the two failed ASLV missions followed up in the 90s by the series of successes (and some failures) that the organization notched up. It is great to see the organization maturing to the stage that it can launch missions to the Moon and now even Mars. Looking forward to its next big mission - the test launch of the GSLV in December using an Indian designed and built cryogenic upper stage.