New opportunity to name an asteroid!

The Space Generation Advisory Council (SGAC) has just announced a new asteroid naming competition, open to anyone, so if you've ever wanted to name an asteroid, now's your chance. The contest closes on November 30.

There are two main-belt asteroids being named, both of them discovered by astronomer Vishnu Reddy, who's shared the naming rights with SGAC so that they can run this contest. (Which is super cool on Vishnu's part!) All you have to do to enter is to fill out an online form listing the name and including an up-to-50-word justification. Entries will be divided into an over-18 and under-18 category. SGAC will perform an internal review to select a name (and two runners-up) to forward to the International Astronomical Union to name each of the two asteroids.

So let's say you're going to encourage your kids to enter this project. First of all, you might want to talk about what asteroids are. They're small, much smaller than planets or our Moon. They mostly hang out in the same place that (151834) 2003 FB122 does, in the space between Mars and Jupiter.

Asteroids are leftovers from the formation of the solar system. When our Earth formed, it was built out of billions of these little things. Jupiter's gravity kept giving kicks to the asteroids near it, so they never were able to stay together and form a planet, leaving the asteroid belt between Mars and Jupiter. So these asteroids are some of the most ancient things in the solar system.

They're very lonely -- if you're standing on one asteroid, you won't see another one anywhere around you. Unless the asteroid you're standing on is lucky enough to have a moon. Many asteroids do. Here's one, named Ida, shown below with its companion, named Dactyl. When Galileo took its pictures of Ida, we didn't know Ida had a moon. Dactyl was a surprise! It's only 1.2 kilometers across. 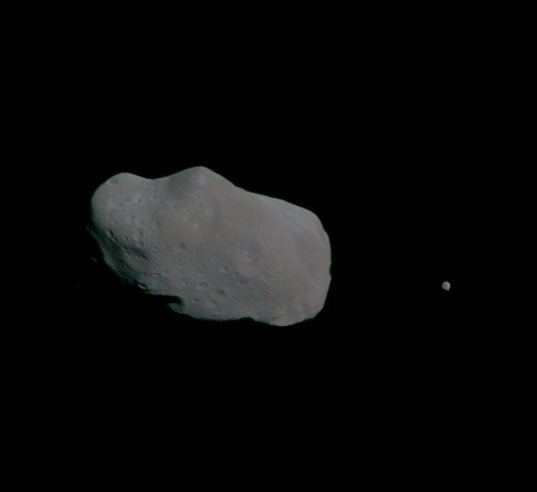 Ida and Dactyl in color

Galileo took the three images for this enhanced-color view of asteroid 143 Ida and its satellite Dactyl on August 28, 1993 at about 16:30 UTC, about 20 minutes before its closest approach. Galileo was about 16,000 kilometers from the asteroid at the time

The asteroid being named in the SGAC contest is closer in size to Dactyl than it is to Ida. Asteroid (151834) 2003 FB122 has an absolute magnitude of 15.3, which tells us it's somewhere around 1 to 5 kilometers across. Here are a couple of other asteroids in that size range. First, here's Steins, which is a bit less than 5 kilometers across:

26 images of Steins captured by Rosetta's OSIRIS cameras during its September 5, 2008 flyby were aligned and resized to the same resolution in order to make this animation of Steins rotating.

And here's a tiny asteroid named Itokawa, which is only 500 meters across. Itokawa is probably smaller than the one currently named (151834) 2003 FB122, but we don't really know for sure. 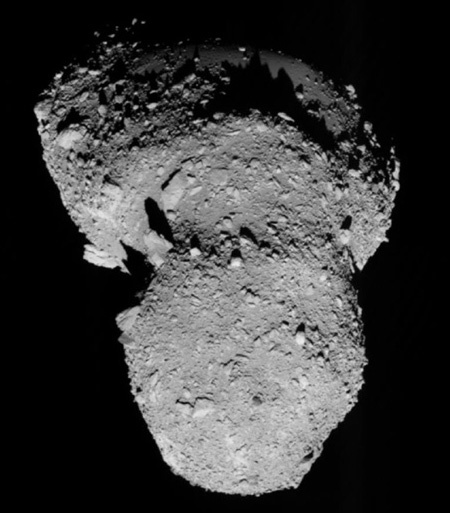 All of these asteroids look pretty different, don't they? And we don't know what (151834) 2003 FB122 looks like, at all. We probably won't ever know -- we would need to send a spacecraft there. Will we send a spacecraft to this tiny little world? Well, maybe we could, if we develop new technology that makes it cheap and easy to send lots of tiny spacecraft to the asteroid belt to wander around and look at lots of different things. Maybe you should design such a spacecraft. What would it look like?

Anyway, we don't know very much about (151834) 2003 FB122 but it would be a lot easier to talk about it if it had a better name. What would you name it? No, don't name it after yourself. Or after your friend, or your family member, or a pet. A lot of people want to do that. And if you were the one who had discovered this asteroid, you could name it for a person that you particularly like. But if you're going to win a contest, you have to convince other people that they also want to use your suggested name. That means the name has to be important not just to you, but to a lot of people.

So instead of suggesting we name it for you or a friend or family member or pet, you need to name it after somebody or something that means something to a lot of different people. It doesn't have to be a real somebody; it can be a character or thing or place in a story or a legend.

The International Astronomical Union does have some hard rules for what names they will and won't approve for asteroids. Here are those rules:

So that's what you can't do. What can you do? There are lots of great names out there, but the winning name will have to include a good reason. What kinds of themes make for good asteroid names? People or characters who are lonely wanderers? Things that are mysterious goals for exploration or discovery? Strange legendary creatures? What other ideas can you think of?

Once you've thought of your idea, write down the reason you think your idea is good. Make sure to tell the judges who or what the source of the name is, and explain why it's a good name, in 50 words or less. This paragraph contains 50 words. Good luck!

I suggest leelifesonpeart, the three guys in Rush. A band that has a song called 'Cygnus X-1' deserves an asteroid named after them.

Call it Sweet Potato because it looks just like one, and even has craters that look like eyes. I see them like that in the store all the time.

Folks, if you want to enter, you have to do it at the SGAC website -- it won't work to put your suggestions here.

Helpful suggestion: grab a name and click on the embedded link and work your way over to the all ready taken name list (it's alphabetical) and click on the starting letter then look for your name. If it's there or a close variation, it is taken.

how do you find names already taken

any program can be use it to see this asteroid