When LADEE launched on September 6, it launched into Earth orbit. Today, it is finally on a path that will take it to its October 6 lunar orbit insertion. A direct-to-the-Moon trajectory would have been faster, but it would have required much more fuel and a larger launch vehicle.

I've been wondering about the status of LADEE and Lunar Reconnaissance Orbiter -- two missions not managed by JPL or APL -- in the face of the shutdown. I have finally been pointed to a great source of information on LADEE's status, thanks to a comment left on my blog entry by Mike Loucks yesterday: "LADEE is being operated by essential personnel at NASA/Ames. TCM-1 was executed Tuesday afternoon as planned, as will be the Lunar Orbit Insertion Burns that start on Sunday." In a series of posts on their blog "The Astrogator's Guild," spacecraft navigators Mike Loucks and John Carrico, Jr. have been explaining LADEE's circuitous path to the Moon.

Here is what LADEE's initial orbit looked like on the morning of September 11, 2013. The green path had already been traveled by the spacecraft (green circle); it had passed through apoapsis and was returning toward Earth. The dotted lines show the spacecraft's future path. 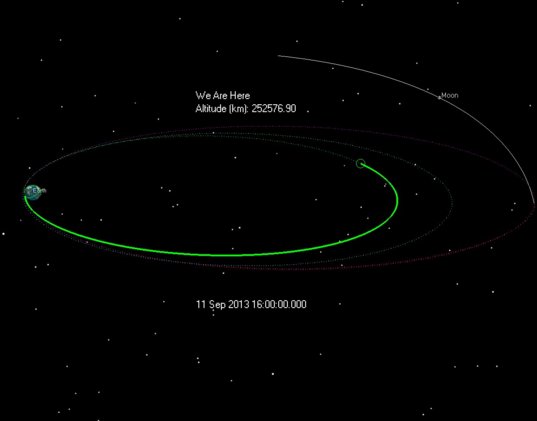 As explained further on their blog, LADEE performed two Perigee Maneuvers on September 13 and 21, firing its main engine to increase its speed as it passed through perigee. This has the effect of raising the height of the orbit's apogee. The second Perigee Maneuver gave LADEE the orbital height needed to reach the Moon, but the Moon wasn't there at the time that it arrived at its next apogee. LADEE returned on a last Earthward loop, reaching its final perigee yesterday at 11:00 UTC. It is now on the way to the Moon, which will be at the right spot in its orbit this time for LADEE to rendezvous with it.

Navigators commanded one final trajectory correction maneuver to fine-tune the course toward lunar orbit insertion on October 6 at 10:57 UTC. According to a tweet from John, that maneuver "looks good," so all is well for LADEE's lunar arrival.

What's next? Here's the summary, from a September 27 blog entry.

LOI-1 is designed to place the spacecraft into a 24 hr orbit, with a periselene altitude of 750 590 km.  After 3 revolutions in this orbit, 3rd-body Earth gravitational perturbations will have lowered periselene to an altitude of 250 km (by design).  At this point, LOI-2 will be performed on 9 Oct 2013 10:37 UTC ( to place LADEE into a 4 hr orbit (also with a 250 km periselene altitude).  LADEE will spend 3 days in this orbit until LOI-3 (12 Oct 2013 10:37 UTC), which circularizes the orbit at 250 km.  LADEE will spend 30 days in this “commissioning orbit”, and will also perform tests using the laser communications experiment (LLCD). The timing and magnitudes of the maneuvers leading to the commissioning orbit are given below. 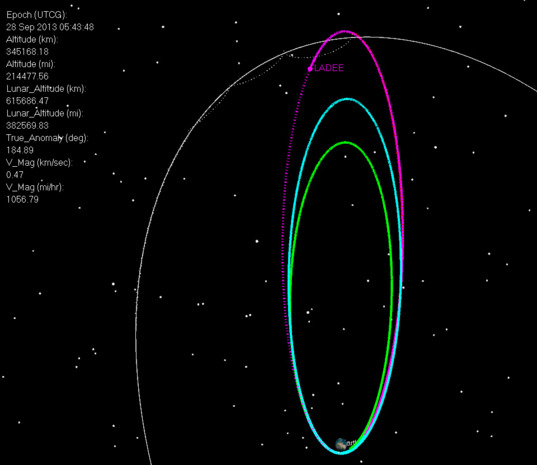 Go LADEE! And I hope that by the time you reach the Moon, this stupid shutdown will be over and scientists employed at NASA centers can get on with the science!!

Regarding Lunar Reconnaissance Orbiter: I don't have an awesome blog like the Astrogator's Guild to point you to for that one, but I have contacted several folks at Arizona State University, where they operate the Lunar Reconnaissance Orbiter Camera (LROC), and I've been told that business is as usual for them. Just like the University of Arizona's HiRISE operations center, which released an awesome image of comet ISON captured from Mars today, LROC prepares and posts its own image releases without NASA headquarters being in the editorial loop, so they are continuing to post Moon images through the shutdown. As is, by the way, MESSENGER from Mercury.

I made a mistake in the original posting, which I have now corrected (after seeing it here). Our initial periselene at Lunar capture should be close to 590 km, and not 750 km as it says above. The 750 km number comes from our altitude at the end of LOI-1, which is not periselene. We actually start the LOI-1 5+ minutes after periselene in order to make the capture burn "visible" to the DSN ground stations. We pay a small delta-v penalty for that, but NASA likes critical burns to be "visible" from the ground.

Fixed! Thanks for keeping the communication channels open, Mike.