Over the last couple of days I have fallen down a research rabbit hole -- I began with a question about clay minerals on Mars and find myself, today, writing about the history of major impact basins on the Moon. The trail that led me here has to do with geologic time scales -- the stories that geologists tell about the major events that happened in the history of a planet. I will climb back out of the rabbit hole eventually with lots of good stories about the geology of many different planets, but I'm going to have to tell those stories bit by bit.

It all begins, appropriately, with the history of impact basins on the Moon. I think that's appropriate because the Moon is where the study of planetary geology started, even before the Space Age. The familiar face of the Moon contains dark splotches, the maria. Look at the maria with a telescope, and you can see that they're flat plains that appear to fill low-lying areas. And most of those low-lying areas are circular basins rimmed by mountainous ridges. 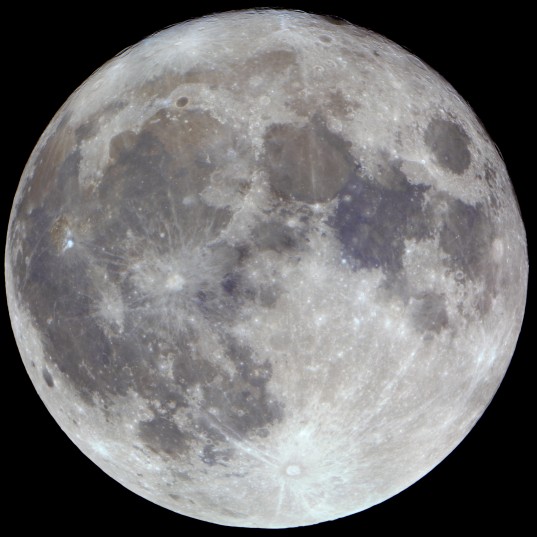 The full Moon on March 19, 2011 coincided with the Moon being at its orbital perigee, an uncommon coincidence that made it appear (slightly) larger and brighter than most full Moons. Rolf Hempel took advantage of this "Supermoon" apparition and clear skies over Germany to capture this spectacularly detailed portrait.

We know now that these are impact basins, places where asteroids slammed into the Moon. Arguably the most beautiful of the Moon's basins is Orientale, whose glory we really couldn't appreciate until the Space Age, because its eastern edge just peeks over the visible near side of the Moon. Here is a lovely view from Lunar Reconnaissance Orbiter. 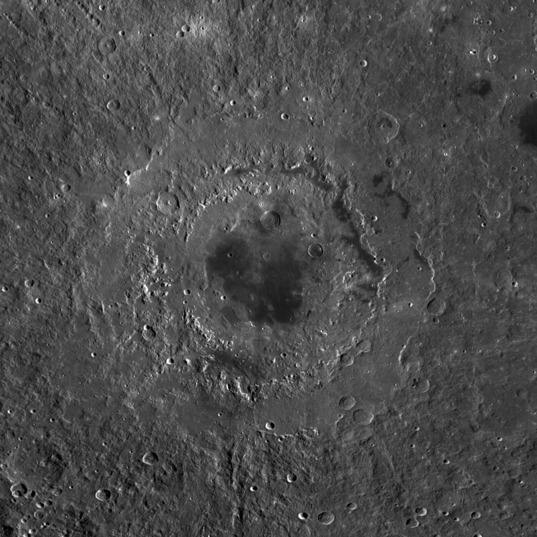 Orientale is the youngest large impact basin on the Moon and is about 960 kilometers across. This view, cropped from the Lunar Reconnaissance Orbiter Wide-Angle Camera global mosaic, covers an area roughly 3000 kilometers square. To see the global Wide-Angle Camera mosaic at its full resolution (100 meters per pixel), visit the Lunar Reconnaissance Orbiter Camera team website.

The big basins are old, so a lot has happened to them since they formed. So much, in fact, that some of them can be difficult to spot in photographs, even though they're very big (all of the ones discussed here are 300 kilometers wide or more). But when you have topographic data and gravity data, you can make maps that cause hidden basins to leap out at you, like they do in this map of lunar crustal thickness. Basins have thin crust (blue and green), and are often rimmed by thick crust (red and orange). 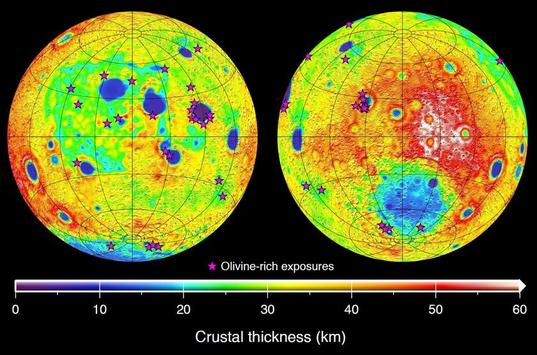 Geologists take maps like the one above and draw circles around basins and give them names. Some of them are classical names that Moon fans should recognize, things like Imbrium and Crisium and Orientale. Other names are unfamiliar; these are the basins that were not obvious until we got topography and gravity data. Often, these previously hidden basins are named by mentioning two craters or other features that occur on their edges -- things like Freundlich-Sharonov and South Pole-Aitken. 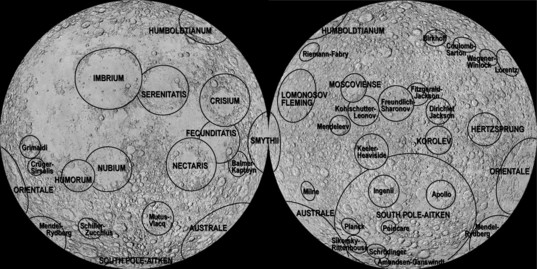 A map of the major lunar impact basins on the nearside (left) and farside (right).

So far, this is all stamp collecting. We've named some basins. Who cares? Well, now that we've identified where the Moon's big basins are located, we can start delving into the history of the Moon. Which one happened first, and which one happened later? When did all of this stuff happen? What order the lunar basins formed in is a question I have a lot when looking at these global maps of the Moon, and I hadn't found an online resource for it. So I am hereby making one, based on a new paper that's in press in the Journal of Geophysical Research by Caleb Fassett, Jim Head, and another five coauthors: "Lunar impact basins: Stratigraphy, sequence and ages from superposed impact crater populations measured from Lunar Orbiter Laser Altimeter (LOLA) data." The paper contains a table that tells us the relative ages of many of these basins -- which ones came first and which ones came later.

Basin names are in caps if they are in caps on the map above, to help you locate them. It lists the basins from oldest to youngest, based on crater counting -- basins with more, bigger craters on top of them are older. For a few basins, you can actually see one basin overlap another; that's noted in parentheses.

This is the framework for part of the origin story about the Moon, the second major chapter in the Moon's history, after its initial formation and cooling. There are still lots of parts of this story yet to be told. How fast did all of this happen? We think it all happened pretty early in the history of the solar system; one of the last impact basins, Imbrium, is pretty reliably dated (thanks to the Apollo missions) at about 3.8 billion years old. Everything else on the list, except for Orientale, happened between the time that the Moon formed 4.6 billion years ago, and Imbrium, 800 million years later. That's how old geology on the Moon is -- it's almost inverted from Earth, where most of the geology that we can see in rocks around us happened in the last few hundred million years.

Well, here's something to make you think. Rocks returned by the Apollo astronauts that were thought to come from Nectaris are only 70 million years older than the dates we get for Imbrium. When you're talking about things that happened nearly 4000 million years ago, 70 million is virtually an eyeblink. Look where Nectaris is in that list. It's right in the middle! If Nectaris really is only 70 million years older than Imbrium, that tells a shocking story: that half of the Moon's biggest basins happened in a really short time, geologically speaking, an event that's sometimes called the "lunar cataclysm" or "late heavy bombardment."

But what if the age for Nectaris is wrong? It could be; the compositions of lunar rocks read from orbit suggest that Apollo astronauts might just have been sampling Imbrium-related rocks over and over and over again, and that we don't actually know how old Nectaris is. This is all part of the work geologists are doing right now -- sorting out the order of events in the history of the moon and other solid-surfaced worlds in the solar system, trying to understand our origin story. Fascinating stuff, and I'll have more to say about this work in later posts.

Some more technical information about the Fassett et al. paper for people interested in its conclusions: The listed basin order is based on crater retention ages, and there are uncertainties, of course, with a fair amount of overlap, which means that the order of some craters is ambiguous. Stratigraphy can help: where basins clearly superpose each other, that's noted. Fassett et al. state that this order pretty well matches the previous standard reference (Wilhelms 1987) but there are a couple of interesting changes: "Humboldtianum may be younger than Crisium, and Serenitatis may be older than Nectaris....If this interpretation of the relative stratigraphy of Serenitatis is correct, then assigned absolute ages for these nearside basins need to be re-evaluated."

Fassett et al. look at what the present work means for the cratering history of the Moon. Previous work has suggested that there are two different populations of impactors that produced the lunar cratering record, a "Population 1" and "Population 2", with the earlier, "Population 1" having more large craters compared to the later "Population 2." The present work supports that conclusion, with a surprising twist. The two different populations were proposed based on observed differences in the crater size-frequency distributions in highlands and maria. It's been assumed that Population 1 had to do with the early bombardment, including the postulated Late Heavy Bombardment, and that Population 2 came after that, during the mare volcanism of the later Imbrian period. But by looking at crater statistics of groups of similar-age basins, Fassett et al. find that the shift from Population 1 to Population 2 occurred during the early, heavy-bombardment part of lunar history -- that Population 1 produced the pre-Nectarian basins and that Nectarian-age basins (the ones between Nectaris and Imbrium) are predominantly covered with Population 2 craters. That suggests that the shift to Population 2 came some time after Nectaris but definitely before Imbrium and likely before the mid-Nectarian.

This is one of those things that raises more questions than it answers. As with lots of studies of geology on the Moon, we desperately need rock samples from places that weren't affected by the Imbrium impact. Fassett et al. suggest Freundlich-Sharonov as a site for sample return. This basin appears from crater counting to be very similar in age to Nectaris but is located almost exactly opposite the planet to it and Imbrium. In the crustal thickness data Freundlich-Sharonov shows up as a beautiful deep hole nearly centered on the lunar farside, east and a bit south of Moscoviense.

It's good to see that others love Orientale :) I love how the Moon's highest points are so close to its lowest points (Engel'gardt and the South-Pole Aitken Basin)...now there's a hiking trail! Some of those drops must be incredible in that area. Here's an interactive map of the Moon's topography, from the LRO imaging. Some serious hi-def/zoom!: http://target.lroc.asu.edu/q3/

I also recently researched a question about clays on Mars. I'd like to take credit for not going down a rabit hole (or in this case, a worm hole leading to a spot 4 billion years ago) because of discipline or focus, but the evidence strongly suggests that the real answer is procrastination. At the last minute, i simply didn't have time. But thanks to you, i now know something about the rabbit hole. Looks inviting.

I know that rabbit hole. I was not eager to update after GRAIL, so I'm glad someone else visited it. Speaking of Moon dating, "at a Royal Society discussion meeting entitled Origins of the Moon this week (23 September). Professor Richard Carlson of the Carnegie Institution of Washington will say that Earth's Moon is more likely between 4.4 and 4.45 billion years old rather than 4.56 billion years old, as previously thought." [ http://phys.org/news/2013-09-moon-younger-thought.html ] His assessment, derived from rock dating, tightens the time schedule vs earliest Earth zircons. But nicely so: not much of a remaining gap. However, the promised reference material is not posted yet on Royal Society's page.

This blog is awesome!

The sequence of lunar impact features is a hot topic, since there is so much new data from LRO and GRAIL. However, I believe there is an older and much larger feature than the South Pole-Aitken Basin: My reasons and quantitative description is in my new book "The Moon's Near Side Megabasin and Far Side Bulge", Springer, 2013, doi 10.1007/978-1-4614-6949-0.