Pluto's atmosphere does not collapse

Just four months ago I posted about a paper recently published by Leslie Young and coauthors that described three possible scenarios for Pluto's atmosphere. Yesterday, Cathy Olkin, Leslie Young, and coauthors posted a preprint on arXiv that says that only one of those scenarios can be true. And it's a surprising one. The title of their paper says it all: "Pluto's atmosphere does not collapse." (Nicely written, ladies. I like strongly stated paper titles.)

Pluto's horizon spans the foreground in this artist's vision, gazing sunward across that distant and not yet explored world. Titled New Horizons, the painting also depicts Pluto's companion, Charon, as a darkened, ghostly apparition with a luminous crescent against a starry background. Beyond Charon, the diminished Sun is immersed in a flattened cloud of zodiacal dust.

A little background: Pluto has an atmosphere, the kind we have (only much colder), gas that swirls with wind and climate, not like the tenuous exospheres of the Moon and Mercury. But Pluto also has a very elliptical orbit. It's currently relatively close to the Sun; later in its year, when it gets farther from the Sun, it has always been expected that the atmosphere would collapse, mostly freezing to the ground. Some molecules of gas would be floating around -- atoms do that -- but they'd be so sparse that they would never hit each other, and Pluto would have an exosphere for that part of its year. 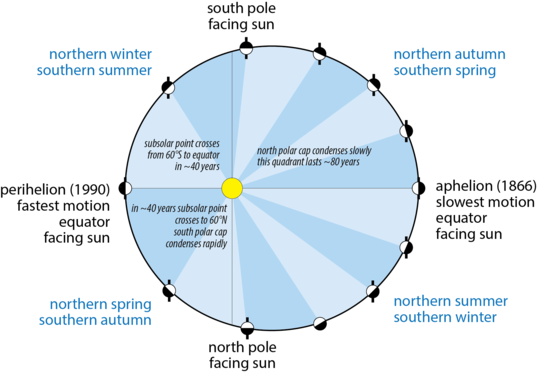 With an orbital eccentricity of 0.24, Pluto is almost twice as far from the Sun at aphelion than at perihelion. Its seasons are aligned with this elliptical orbit such that perihelion occurs at the transition from northern winter to spring.

Pluto is now moving farther from the Sun. So you'd expect its atmosphere would be getting thinner, freezing out onto the surface. There has been worry that New Horizons would not get there before the atmosphere collapsed. Astronomers have observed stellar occultations by Pluto to keep tabs on its atmosphere repeatedly since 1988. Throughout the 2000s, the atmosphere seemed to be at a plateau -- there was some variation in its pressure, but the error bars all overlapped, so it was hard to say which direction it was going.

My previous article explained how there were three possible scenarios for Pluto's atmospheric behavior that were consistent with the data. In two of them, the atmosphere would be collapsing right now; in fact, one of the models predicted that the atmosphere would pretty much all have collapsed by the time of the New Horizons flyby.

Well, the last two stellar occultations whose data are included in this paper, including one on May 4 of this year, have shown that the atmosphere is not collapsing right now. In fact, it's still getting thicker, even as Pluto is moving farther from the Sun. Plugging these data points back into their climate models, Olkin and Young and their coauthors conclude that the only model that can explain the observed behavior of the atmosphere is one in which there is a permanent north polar cap. And in those models, the atmosphere never completely collapses. It waxes and it wanes, but it never collapses.

New Horizons will get a good look at the distribution of recent ices on Pluto. But really the best way to test Olkin and Young's models is to wait and watch more stellar occultations. "The current epoch is a time of significant change on Pluto. Most of the [permanent northern cap] models show a maximum surface pressure between 2020 and 2040. Regular observations over this time period will constrain the properties of Pluto’s substrate and the evolution of its atmosphere." 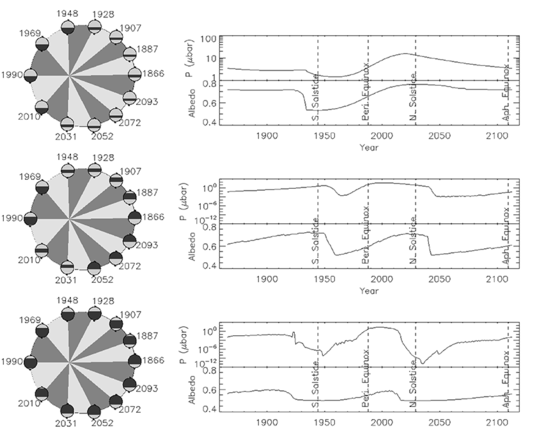 In the new paper, it is the top model that appears to be consistent with the most recent stellar occultations. It implies that Pluto's atmosphere has a pressure above one microbar year-round; the pressure varies a lot but the atmosphere never transitions from a collisional one to a collisionless one.

I find interesting that Pluto's atmosphere partially freezes and falls to the surface when it further away from the sun. When it is close to the sun the partially frozen atmosphere on the surface unfreezes and returns to the rest of the atmosphere. Pluto is one mystery of a planet and I can't wait to find out more when New Horizon Spaceship reaches the planet in 2015.