It's eclipse season for Curiosity right now -- the rover has recorded several transits of Phobos and Deimos across the Sun. Those images are cool enough on their own. But today was an especially good Phobos transit, where it blotted out maybe a third of the Sun's disk. And the Curiosity team performed a cool trick. While Phobos was blotting out the Sun, and while Curiosity was taking pictures of the transit with her Mastcams, she also used her Hazcams to take a wide-angle shot of the landscape. What happens when a moon blots out the Sun? It gets darker. Can you see the effect of Phobos' passage in this animation? It's like a plane flying overhead! Except, instead of a plane, it's a space potato!

On sol 368 (August 19, 2013), Curiosity watched Phobos transit the Sun with its Mastcam. At the same time, the rover used its Hazard Avoidance Cameras or Hazcams to watch Phobos' shadow darken the landscape. Hazcam cannot take repeat images as rapidly as Mastcam; only two Hazcam frames document the darkening of the landscape during the eclipse.

The animation presently only includes thumbnail images from Mastcam. Thumbnails are one eighth the full resolution of the camera. So the images of the Sun don't look very good yet. I'll replace this animation with an improved one once the full-res images have been returned to Earth.

I showed this animation to Bruce Betts (our esteemed Director of Projects) and he pointed out to me that he's one of the few people around who's actually done research on Phobos' shadow. He told me:

About 20 years ago I published a paper analyzing the first orbital thermal infrared observations of a Phobos shadow crossing the surface, from the now-mostly-forgotten Phobos '88 mission [also known as Phobos 2].  At that time I tried to imagine what the eclipse would look like and how the landscape would appear if one were on Mars. To actually see both of these from Curiosity... I can't even properly express how amazing and cool that is to me!

Speaking of cooling, amazingly, in fluffy-dust-covered areas on Mars, even a partial eclipse for about 20 seconds causes a few degrees' drop in surface temperature. That would not be true in the much rockier area Curiosity is in.

I thought it'd be fun to show an image of a similar event, shot from above. Here is a still image of Phobos' shadow crossing the surface of a different spot on Mars, near Spirit's landing site. 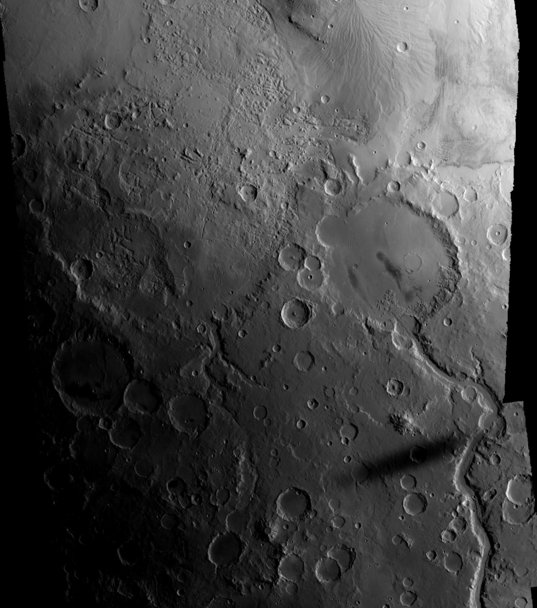 And here's another animation, also from Mars Express:

In a six-frame animation spanning 15 minutes over January 30-31, 2010, the Mars Express Visual Monitoring Camera observed Phobos' shadow transiting Mars. It is late autumn in Mars' southern hemisphere, so the shadow of Phobos (which orbits exactly along Mars' equatorial plane) falls on Mars' high southern latitudes. Mars Express is looking down nearly onto Mars' south pole, which is in winter darkness; the bright splat at the center of the animation is the Argyre impact basin, with the crater Galle located on its rim. Phobos' shadow crosses northern Argyre and proceeds across Noachis terra. This is the first time that VMC wasknown to have imaged Phobos' shadow.

Thanks Emily! That's just as a sweet space potato as the work by JL in the other blog too that you can get! That is so cool! Congrats to Bruce Betts also for his joy in tis based upon his previous work on this subject!

Is there also a good temperature swing when an eclipsing shadow occurs?

Mike M. - The article did point out that temperature swings will occur with the greatest swings being in the dusty region. That's because dust particle sizes let light forward scatter an larger sizes back scatter the light (heat energy). Saturnian rings are classic examples of seeing light forward & back scattering. The article has no actual degree ranges mentioned. I hope that helps.

Thanks for the heads up about this; great animations and pictures!