There's not much to say about this photo, other than: "wow." Thanks to Bill Dunford for pointing out this set of images on Cassini's raw images website.

EDIT: A few hours after I originally posted my version of this photo, Gordan Ugarkovic posted a much better version, so I've replaced my version with his version below. It's amazing how he managed to bring out details in the banding of Saturn's atmosphere. 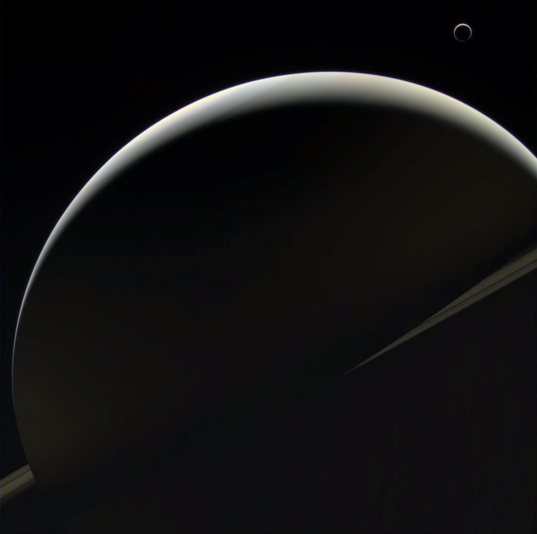 Cassini captured this stunning view of Saturn and Titan from nearly behind the pair on 11 August 2013.

We're looking at Saturn and Titan from nearly behind. The Sun shines through Titan's atmosphere, making nearly a complete ring around it. This photo doesn't bear too-close scrutiny, because the data for red and green channels was returned to Earth at only half its full resolution. That's why the rings look a little pixelated. But the composition is really stunning. Nice work, Cassini team!

I've received several comments on Twitter about this photo, how "science fiction-y" it looks. That's space exploration for you -- turning science fiction into science fact.

I only saw your version after I posted my own on UMSF. Were you aware that there's a 2nd RGB set availabe with all frames at full resolution? Perhaps that accounts for the more visible cloud banding in my composite.

Absolutely stunning view! I wonder, though, where's the Titan positioned here - between Cassini and Saturn, or is Saturn between the two?

Perhaps that's it, Gordan! Petteri: Titan is on the far side of Saturn from Cassini.