SMAP Under Construction: Field trip to the Spacecraft Assembly Facility

Yesterday I enjoyed my second-ever opportunity to suit up and enter the clean room of the Spacecraft Assembly Facility at the Jet Propulsion Laboratory. This is the place where all the parts of a spacecraft come together. And then get taken apart and put together again and again. Assembly is not a one-way process -- the engineers assemble and disassemble everything repeatedly as they run parts and systems through test after test to make sure they will function for years in space with no chance ever of returning to the shop.

On display were one spacecraft and one instrument under development. SMAP, which stands for Soil Moisture Active Passive, is a radar spacecraft that is planned for launch next year to study soil moisture, an important input into weather and climate models. It follows in the footsteps of ESA's Soil Moisture Ocean Salinity (SMOS) spacecraft. The instrument, ISS-RapidScat, will launch on a Dragon capsule to the Space Station. It'll be bolted to the side of the Columbus module, from which it will study ocean wind speeds. It's being built from flight spare parts of the QuikScat satellite, whose rotating antenna quit spinning after 10 productive years in 2009.

Last time I was in the "High Bay," as it's known, it was to see Curiosity. Curiosity was preparing to travel to the surface of another planet, and strict planetary protection controls dictated that everyone be suited up head to toe so that only our eyes showed. For SMAP, things were different: Earth orbiters need less strict cleanliness. The smocks and caps we were given were intended to keep dust at bay. Here I am interviewing SMAP project system engineer Shawn Goodman for Planetary Radio. Listen to the show next week to hear what he has to say! (By the way, I know I'm not holding the mic to his mouth there -- Mat wasn't recording at the time, he'd quit and was using his still camera...)

The media opportunity was in honor of NASA Administrator Charlie Bolden's visit to JPL. Here he is entering the clean room in the company of JPL director Charles Elachi. Note that they got much fancier hats than the rest of us plebes (even the missions' engineers and scientists) did! Only the best for the Administrator. Bolden was being given a guided tour of all the hardware on display, and lots of media were following him around. I figured I'd learn a lot more by wandering the room and talking directly with engineers. It was fun! These people love their work and seemed to enjoy explaining it to me.

When I went to see Curiosity, the rover was almost completely assembled. This visit was a nice contrast to that one: SMAP was nearly completely disassembled. Instrument Manager Wendy Edelstein told me they'd had the spacecraft almost completely assembled last week, but took it apart to incorporate a newly delivered piece of hardware, the Boeing-built motor that will spin SMAP's rotating, deployable antenna. Here, Edelstein explains that hardware to Planetary Radio host Mat Kaplan. SMAP has a huge, deployable, spinning antenna, which you can see in this artist's rendition. Basically, the whole gold part spins at a rate of about 14 times per minute, while the silver bus and solar panels are not spinning. 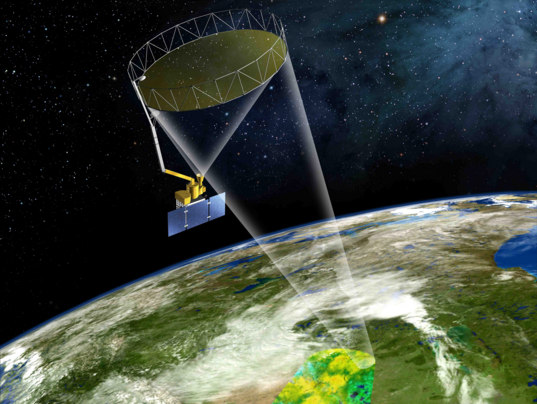 Fitting that 6.5-meter antenna inside a spacecraft fairing is no easy task. SMAP was originally launching on a Minotaur, which required it to be skinny indeed. It is now riding to space on a Delta II, so it will be dwarfed by its fairing. Here's a diagram showing how the antenna will deploy. (The antenna has not been delivered yet -- I was told it's arriving in December -- and can't be deployed under Earth gravity anyway.) 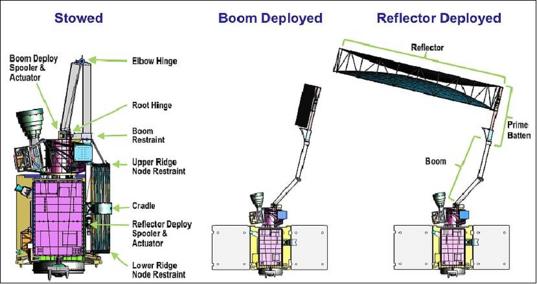 How SMAP deploys its antenna

It was while talking with Edelstein that I realized that we are talking about a spacecraft with a spun and despun section and a deployable antenna. Remind anybody of Galileo? (Recall that the Galileo Jupiter orbiter's deployable antenna turned out not to be deployable after all, and there were endless headaches with the spin bearing assembly that connected its spun and despun sections.) I admitted to Edelstein that that combination made me very nervous, and she laughed and said that they have a lot of engineers working on the project who remember Galileo all too well. Both deployable antennas and spun-despun spacecraft are actually pretty common.

It was fun to see the spacecraft's guts open to view. Here are two of the electronics panels. I found a diagram online that explains what the various parts are (from this page, under the "Spacecraft" header). The first one contains the main computer (the upper of the big boxes) and the battery and power system. The smaller rectangular box controls the pyros -- all the mini explosives that are responsible for the one-time deployment of things like solar panels and antenna after launch. The two silver circles mark the locations where the gyroscopes will be installed. Most of SMAP is single-strand, meaning there's no backup, but the gyros are an exception to that rule. This panel has more electronics, including the four identical boxes that will control the four reaction wheels. The four gaps are for the radio -- transponders and transmitters. The reaction wheels are big and will occupy a fair amount of the space on the interior of SMAP's rectangular bus. I asked if they were using the same supplier as the one who provided the reaction wheels for Dawn and Kepler, and they said NO. Here's a picture of the RapidScat hardware, with two of its engineers, Julia Stalder and Dragana Perkovic. This hardware is the part that was inherited from RapidScat's predecessor, QuickScat. Stalder told me that they are not reusing the antenna -- they have a new, slightly smaller one -- but that much of the rest of the hardware will be re-certified and re-used. I asked her if there's ever trouble figuring out what's inside the box of this fifteen-year-old hardware and she said it can be an interesting investigative problem but that they aren't sending any hardware to space that they don't know backwards and forwards. One of the main new pieces of hardware they have to build for RapidScat is this big armature, which basically serves as a space-qualified L-bracket, so that RapidScat can be bolted to the side of the space station and still look down. It has a formal name -- the Nadir Adapter Structure Assembly -- which I am sure they abbreviate to "NASA," which isn't confusing at all. Finally, Bolden and Elachi answered some questions from the media. I understand that there were a couple of pointed questions asked about planetary exploration, by both Mat Kaplan and the guy from KNX Radio -- but you'll have to tune in to Planetary Radio to hear those questions and answers! Mat is also planning to put together a video of this field trip, so stay tuned for that.

The manufacturer of the reaction wheels that failed on Dawn and Kepler and a number other missions is Ithaco Space Systems of Ithaca, New York: http://www.nature.com/news/the-wheels-come-off-kepler-1.13032

That sounds like an amazing opportunity. I never thought about the effort that goes in to checking each part. It is assembling something again every time you wanted to make sure one part works better than another. With a very complicated and multi-part machine you would be assembling it hundreds of times. I bet they get really good at taking it apart and putting it together again. Elisa Jed | www.bobbehrendsroofing.com