Keeping up with Curiosity, almost a year after landing

It seems like my attention wandered for just a moment, and all of a sudden Curiosity is really on the road. She's racked up drive after drive, methodically eating up the terrain between here and her goal: the ancient rocks at the foot of Mount Sharp. They are still many kilometers away, but Curiosity's doing what she needs to do in order to get there. And she'll probably do better in the future. Most of her drives are 60 to 70 meters, which is a good distance, but it's not her full 100 to 200 meter theoretical capability; they'll get to those longer distances in due time.

Many thanks to Phil Stooke for sharing his map with me. This one covers the entire traverse -- you can see that Curiosity has finished making up for her initially eastward motion. And in fact Curiosity has already made this map obsolete, with yet another drive on sol 351. 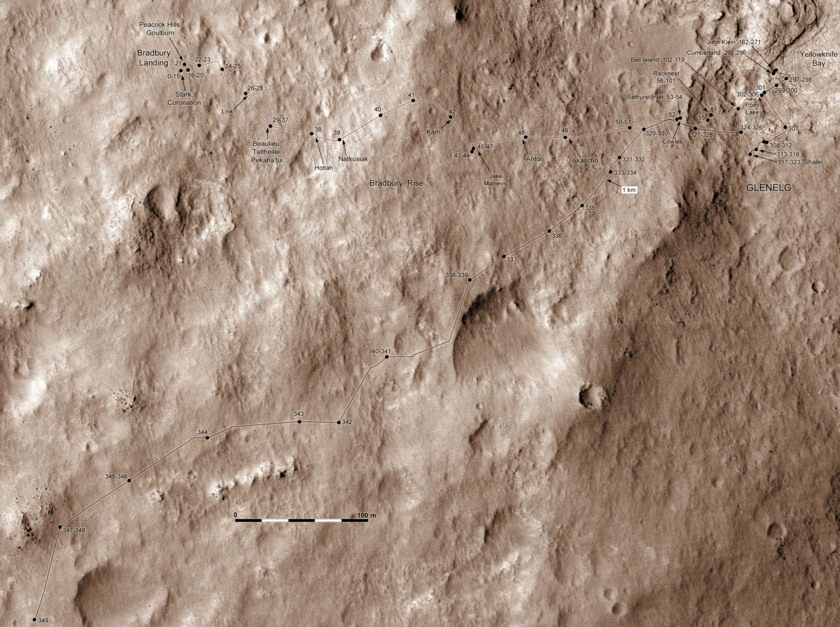 Here is a wonderul view shot on sol 343, about a week ago. In the foreground is a little ridge that she drove around during the subsequent week; that ridge is very clear in Phil's map, just above the scale bar. At each stop they shot a Mastcam mosaic along it, so we have views of it from many directions. But this is my favorite view because of those foothills in the background. You really have to click through and enlarge it to appreciate it.

Curiosity captured this view of a low rock-capped ridge on sol 343 (July 24, 2013). Curiosity had recently embarked on the long journey southwest, toward the hills in the distance.

Let's take a closer look at those hills. Here, I've cropped and zoomed in on them and stretched the heck out of the contrast. I've also employed a trick that we call "Phil-o-vision" at unmannedspaceflight.com, named for cartographer Phil Stooke. You stretch the image vertically in order to make the most out of very flat-lying strata and subtle topographic features. Why would I want to stretch this view? I'll explain in a minute. 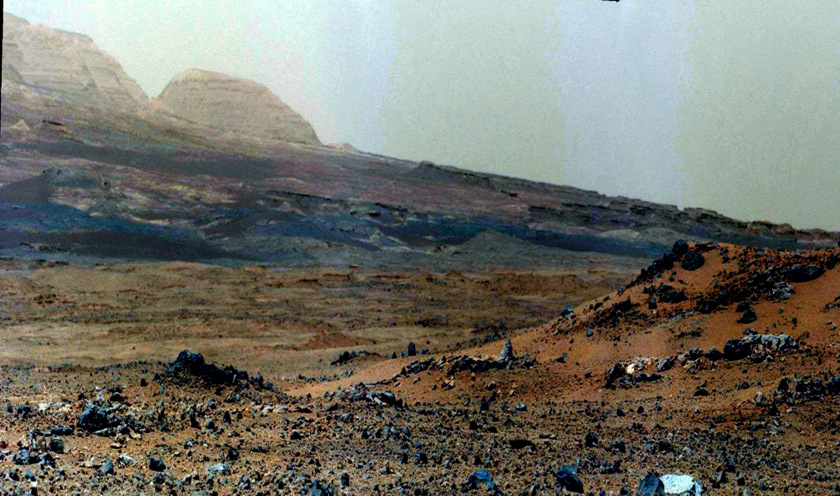 If you appreciate landscapes, your eye is instantly drawn to the hills that are silhouetted against the horizon, with their beautiful flat layers. But these are actually not the rocks that Curiosity is headed toward, at least not any time soon. Those rocks are unremarkable from orbit in terms of their mineralogy. What Curiosity really wants to get up close to are the jumbled layers of rocks below those hills, intermixed with the black sand dunes. Those are the rocks that have signs of interesting water-related minerals as seen from space. Stretching things vertically, you can get a better look at their subtle features and their layering. That stuff is what we're headed toward. It looks very juicy geologically!

I was trying to get a feel for the topography along Curiosity's drive, and I stumbled across the HiRISE team's collection of anaglyphs. In the years leading up to Curiosity's landing, the HiRISE team produced about a dozen digital elevation models of spots within Gale crater. They did that with overlapping pairs of images, captured from slightly different angles. Among the data products they released with those digital elevation models were anaglyphs, 3D views. It is really cool to look at the terrain that Curiosity is hiking through in 3D! Go grab your 3D glasses, or follow the links below to download left and right images and play with the stereo on your own. I added a dot to mark the landing site to orient you. The terrain is pretty hummocky but Curiosity appears to be having no trouble picking her way around low ridges and swales right now. 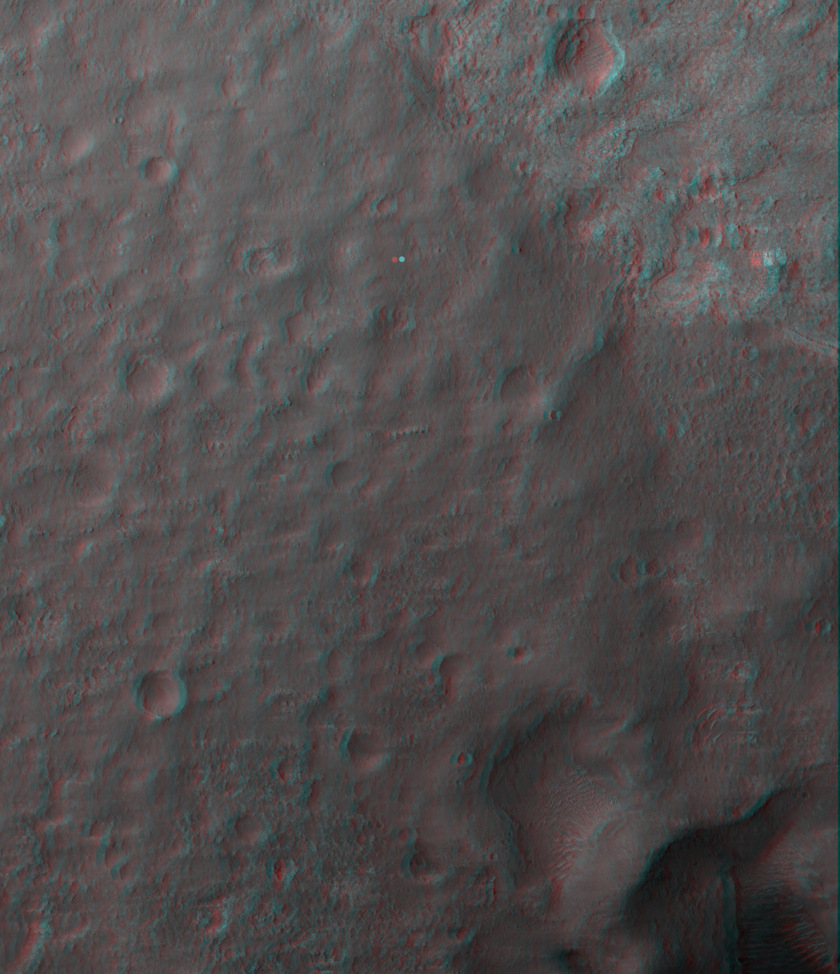 For a 3D view of the landing site, HiRISE took two photos from slightly different angles. The white dot marks the spot where Curiosity landed. The scale at full resolution is about 1 meter per pixel. North is about 7 degrees to the right of up (the images are aligned along Mars Reconnaissance Orbiter's orbital path). More formats: Left stereo | Right stereo

(Sorry, there isn't actually a flicker gif on this one -- I need to add some error handling to these display templates so that link doesn't show up when one doesn't exist.)

On Monday, they are celebrating the first anniversary of the landing. There are two events planned next week. One is an event at NASA headquarters on Tuesday that inexplicably involves astronauts on the ISS but no Curiosity mission representatives. I think it will be super cool to hear and see astronauts congratulating the Curiosity team on their work, so I'm looking forward to that, but it's weird that there's nobody from the mission on the press panel to receive those congratulations and to talk about the successful year and the plans for the future.

But my appetite for that will be satisfied on Monday. I'll be at JPL at 10:00 my time, at a press event featuring an actual panel of Curiosity team members reflecting on the year behind and the road ahead, followed by a celebratory reception outdoors. Now that will be fun! The Tuesday Headquarters event will be carried live on NASA TV; the Monday one will not be streamed live, but will be recorded and streamed on Ustream at 8:00a.m. PDT (1500 UTC) on Tuesday.

I think the 'enlarge' link for the first figure (traverse map) is broken. Gives and XML error.

Fixed! Sorry about that.

I hate to say it, but I see a message in the lack of Curiosity staff on the dias. Manned flight is coming back at the expense of robotic scientific missions. NASA is sending a message loud and clear.

2 questions, Do they have any estimate when they should have a clear line of site to the chute and backshell. Aaaand where oh where are the EDL reconstructions?