They're too far apart to have a party, but today Curiosity and Opportunity could have rung in the New Mars Year. Today Mars reached a solar longitude of zero degrees and the Sun crossed Mars' equator, heralding the arrival of spring in the northern hemisphere and autumn in the southern hemisphere. This is the date that Martian climatologists have identified as the zero-point for Mars' calendar. Mars Year 31 was a good one, with Opportunity active at the rim of Endeavour crater and Curiosity arriving at Gale. Mars Year 32 should be even better, as Opportunity rolls up Solander point and maybe even Cape Tribulation, and Curiosity should explore the rocks in the mountain that drew her to Gale in the first place. And there'll be two orbiters arriving (we hope). MAVEN and the Mars Orbiter Mission's capabilities should warm the hearts of the climatologists who care about how one Mars year differs from the next enough to need to make up a calendar to mark their passage!

Since both rovers are (barely) in the southern hemisphere, the coming of the new year actually signals the time when they need to be looking ahead to winter cold. (Southern hemisphere winters are longer and colder than northern hemisphere winters because they coincide with aphelion on Mars' elliptical orbit.) Curiosity will be less affected by this than Opportunity, but still, cooler temperatures mean more power needed to heat rather than operate mechanical devices, so we're going into a less productive time. Winter solstice will be on February 15, 2014; so the first half of 2014 will be a very low time for Opportunity's activity in particular. The next equinox comes more than an Earth year from now, on August 17, 2014. Summer solstice is on January 11, 2015, and Mars Year 33 will begin with the next equinox on June 18, 2015.

You can read more about this particular calendar for Mars here. Like map coordinate systems, calendar systems are arbitrary, designed by people who need to reckon time for some reason, to suit their own particular needs. Someday there may be people on Mars, and they may well devise a totally different calendar. This one suits climatologists and robotic explorers just fine! 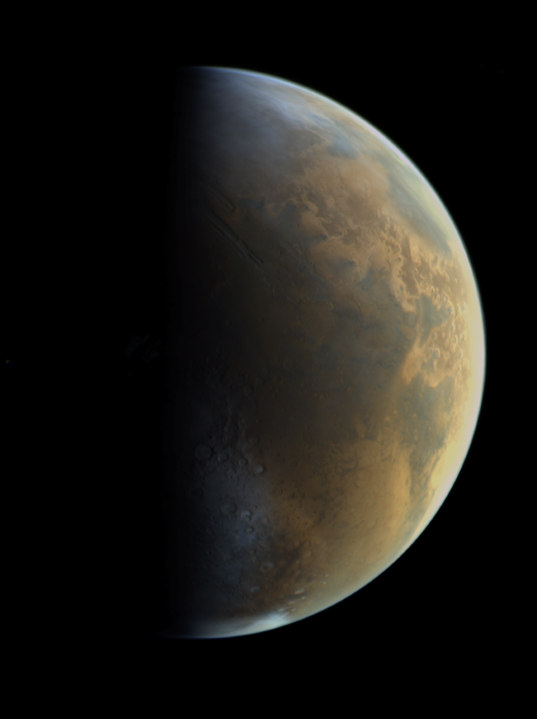 Viking 1 captured several images of a global Mars as it approached for its orbit insertion in 1976. This view includes Valles Marineris at center and the Argyre basin in the south.

I assumed that waste heat from Curiosity's RTG would be used to heat the rover. I haven't looked it up, but i assume that RTGs use thermocouples to convert radioactive material heat into electricity. Thermocouples are currently about 5% efficient, meaning that 95% of the energy is heat. While it would be tough to get that to the end of the arm, the body would be fine. Purdue University has their own power plant. Such plants are maybe 50% efficient. Purdue dumps much of the waste heat into steam tunnel pipes to heat the entire campus. It's free heat. Or is it free electricity? I asked an engineer about distributing heat from a power plant commercially, and this guy went on about how they attempted to sell heat in Detroit, but people didn't buy it. Mind you, this wasn't a plant to produce electricity as well, it just produced heat. I thought this guy knew i was an engineer. And for the record, free heat, even from a nuclear power plant, would be free heat in my book. I'd be totally for it. But on a rover, you don't have the luxury of being stupid. Am i totally wrong?

Food for thought: How would a Martian calendar be set up? a) an average of 6 week months b) 12 month Terran plus 14? month Ares length months c) Martian names only d) Terran and additional Martian named months ex: Centurian = 1st Martian month (guardian month of the year) Marineris = 13th month (Mariner 9 spacecraft; mankinds' 1st Martian orbiter announcing to Mars that we are here to stay) (note: we beat Russia in that race by less than 24 hours. It was a very tense race. Look up the twin Mariner 8 & 9 mission. It was a real nerve shaker of a time. We really wanted to win that race just as bad as the moon race but this time it was not a military deal. American ingenuity and tenacity were truly on the line!

@Stephen Uitti From what I understand RTG waste heat is used to heat the rover body, but a lot of what needs heating is external. This isn't just the arm, the drive system and mast need them too. The original plan was to use actuators that could operate at Mars temps, but that ran into development trouble and got de-scoped.

If the Sun has just crossed the Martian equator, then that means it is the equinox on Mars. This means that it is the MIDDLE of spring for the northern hemisphere, not the start!