Earth and Moon from MESSENGER

UPDATE: I've added a neat photo to this post, showing Earth as seen from GOES at the same time and from the same angle. Also check out my post on the "Day the Earth Smiled" picture from Saturn.

Last week, members of the public were asked to wave at Saturn as Cassini photographed Earth and the Moon as a part of a large mosaic of Saturn. It was a fun gimmick even though there was only a one in a million chance that a photon from your hand and arm would reach Cassini's camera detector -- and that's if you were outdoors for the whole half-hour of the observation. For me here in Los Angeles, Saturn was just barely above the horizon and thus behind buildings for us, but my daughter and I walked outside anyway. I'm enjoying watching this thread on unmannedspaceflight.com, where different people are trying their hands at processing the images into prettiness.

A different space camera received a lot more photons from Earth and the Moon that same day: MESSENGER. During a search for small (hence, faint) satellites, the Earth-Moon pair passed through MESSENGER's wide-angle camera field of view. They're blobs in the image below, although in fact neither is actually wider than one pixel -- they are just so bright that they expanded into brilliant blobbiness. I haven't seen someone do the calculation for how likely photons reflected from any one person were to reach Mercury. According to the caption published with the MESSENGER Earth-Moon photo, Pluto is actually also in this image, but far too faint for MESSENGER to see it.

This is not the first time MESSENGER has seen Earth and the Moon; MESSENGER captured a solar system family portrait a few years ago. 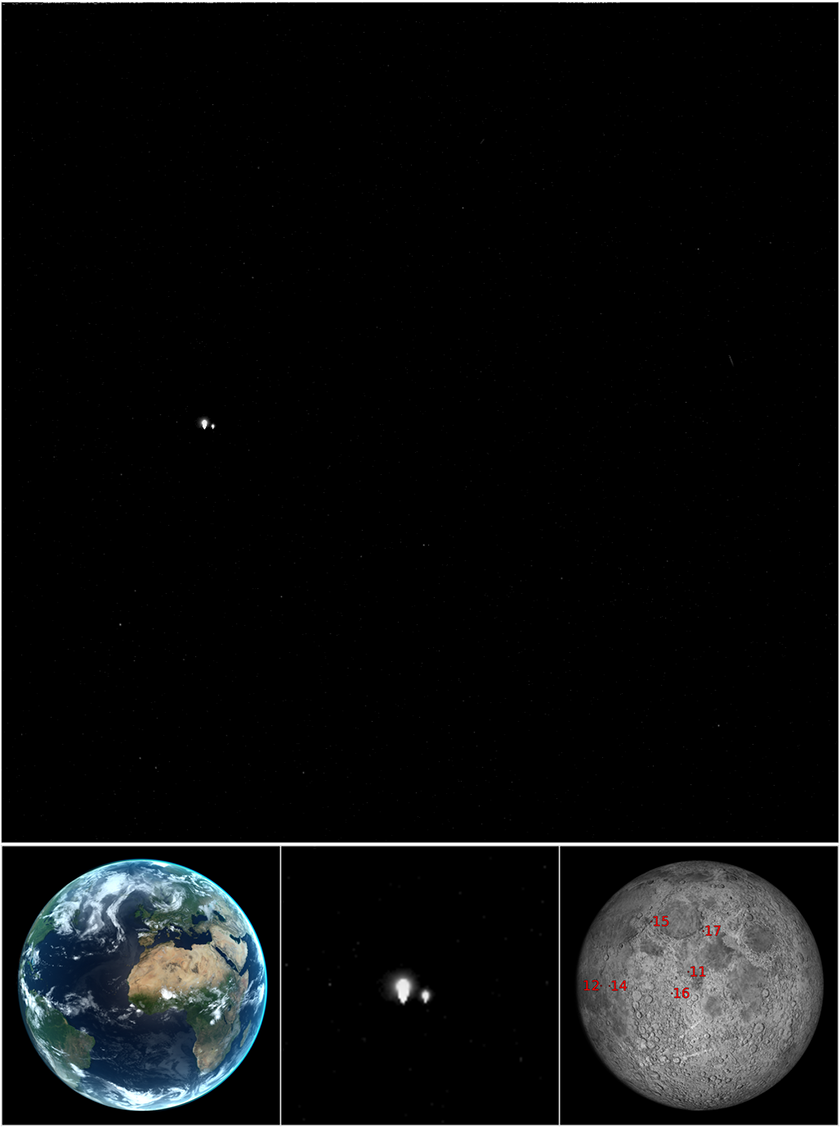 The pair of bright star-like features in the upper panel are not stars at all, but the Earth and Moon! MESSENGER took the photo on July 19, 2013, from a distance of 98 million kilometers. Earth and Moon are both overexposed; the image was part of a long-exposure search for satellites around Mercury.

Here is a lovely comparison photo assembled by the Planetary Habitability Laboratory using image data from Earth's weather satellites acquired at about the same time, from about the same angle, as the MESSENGER photo -- only from much, much closer. The GOES image was grayscale; it has been colorized with data from NASA's Visible Earth project using the Planetary Habitability Laboratory's Scientific Exoplanets Renderer software. 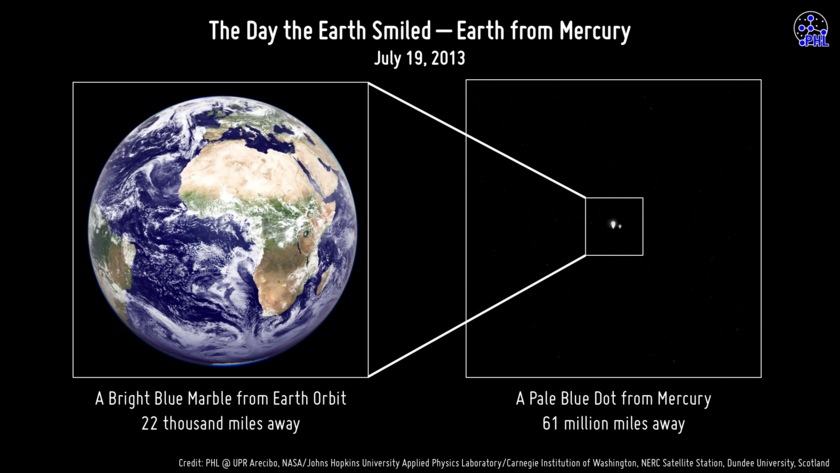 The fingers extending down are likely ccd overload but they could be associated with the data compression algorithm I wonder if they're able to send the data file uncompressed...

Nice! That's really cool we got snapped from both ends. :)

Jim no it's definitely CCD bleed.