ESA celebrated the tenth anniversary of Mars Express' launch with a several-day science meeting that I was very sad not to be able to attend, coming as it did during my daughter's last week of school for the year. During that week they issued lots of press releases and numerous spectacular photos. My favorite of them all is this enormous image of Kasei Valles on Mars. The Kasei Valles are a system of Martian "outflow channels," enormous channels that dwarf water-carved features on Earth. This image covers an area about 1500 by 1000 kilometers in size (you could fit four of the rectangular state of Colorado inside it, or roughly two Ukraines). 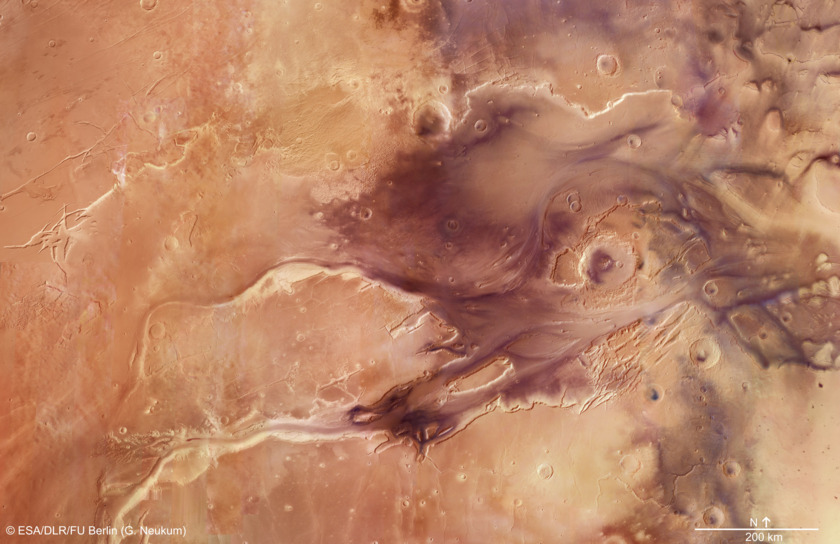 Released on the occasion of Mars Express' 10th anniversary in space, this massive mosaic covers Kasei Valles, one of Mars' enormous outflow channels.

I can't not see the head of a lambeosaurus (a crested duck-billed dinosaur) in the darker areas on the right of this photo. Pareidolia!

Because outflow channels like the Kasei Valles are so large, it's tough to find good pictures on the Internet that show most of their reach while also showing you details of their geomorphology, so this is a wonderful contribution by ESA. It doesn't quite get to the source of the southern branch, but you can see how the upper reaches (at left) curve around the plateau of Sacra Mensa. Then follow them downstream and zoom in and see the lovely braided texture of the valley floor and the way the channels diverge around other smaller plateaus (called "mensae" on Mars), leaving them as streamlined islands. When you click through the above one to enlarge, it only goes to 20 percent its full size; here's a snippet at full resolution (once enlarged). You can download the entire image at full resolution here (it's 25 MB). 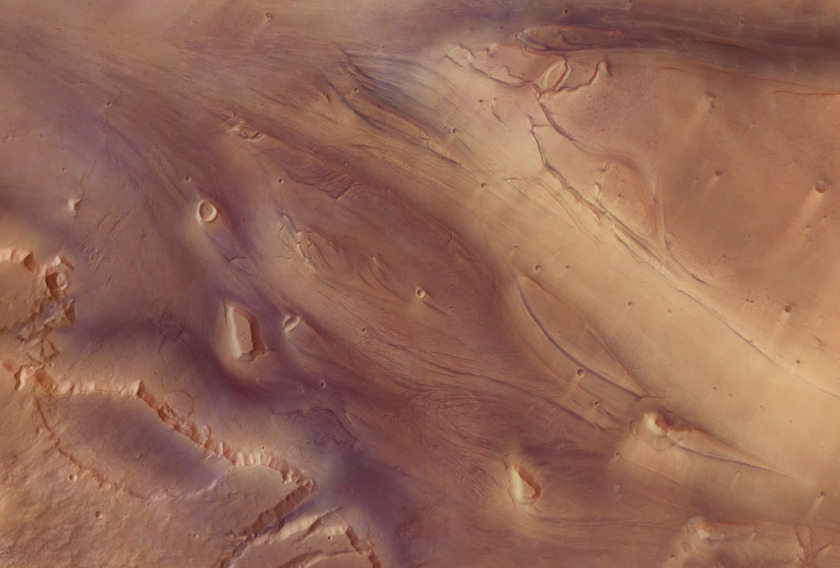 What caused these astonishingly large channels to form? Water is only part of the story; there isn't one simple answer. Tectonics, volcanism, and glaciation probably all played a role, and the valleys are still being modified by the action of wind today. I tried to do a literature search on Kasei Valles and just got confused, so I asked a friend for a quick explanation. Here's planetary geologist Rebecca Williams' description:

In brief, Kasei was carved by catastrophic flooding. The source of the large volume of water is not well known, but some have speculated it came, in part, from Echus Chasma. Certainly multiple floods occurred, but the exact numbers are unknown. Flows were roughly the same age as other circum-Chryse outflows -- that is, Hesperian, probably Late Hesperian. [This is the middle, volcanism-dominated age of Mars' geologic history.] Although not extensively discussed in the literature, there is a 'platey' texture on parts of the floor that is likely late stage lava flows frow the west.

Echus Chasma, by the way, is about 1000 kilometers from the area pictured here, quite far to the south and slightly west; it shoots off of Hebes Chasma, which is itself a northern branch of the Valles Marineris gigantic canyon system. I dug into HiRISE data to look for that "platey" texture that she mentioned; here's one image of the platey stuff (upper left) where it stops at the edge of a plateau on the southern edge of Kasei. 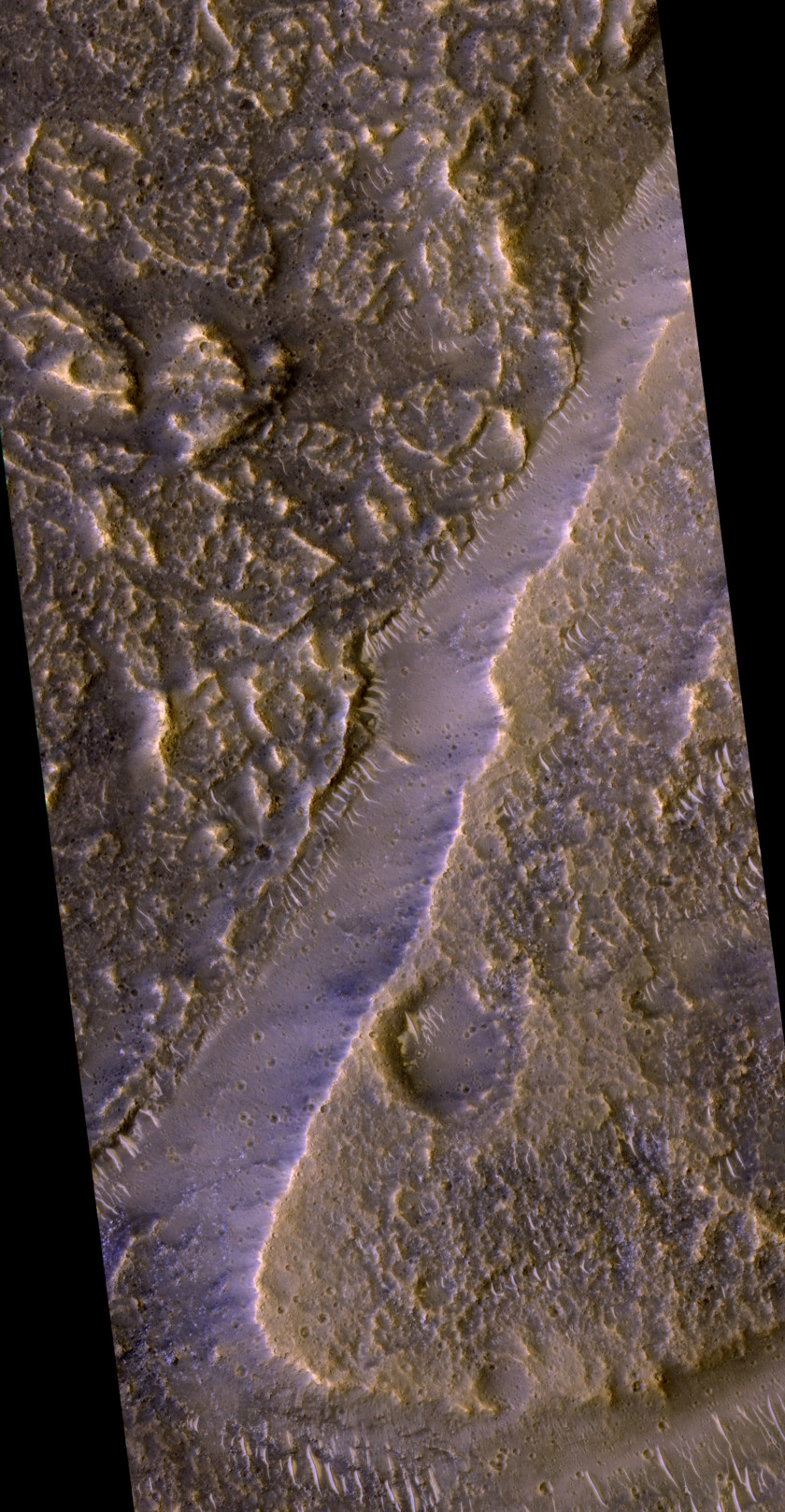 "Platey" material on the floor of Kasei Valles

This image covers an area about 2600 by 5000 meters in size. The valley is at upper left; its floor is covered with platey material. The platey material stops at the edge of a plateau or mensa at lower right, indicating that the platey material flooded the valley after it and the plateau formed. View the original HiRISE image here.

One thing that always impresses me when I look at HiRISE images is how very, very old this terrain is. Seen at the Mars Express image resolution, you can imagine that water swirling around those islands yesterday. Look at it at HiRISE resolution, though, and you find that the land is decayed and decrepit, pitted by craters, scoured by wind, tracked over by sand dunes, and everywhere dusty. The events that carved these valleys were dramatic, but they happened a very, very long time ago, before there was multicellular life on Earth.

Becky went on to say "Also noteworthy is the small channel within the southern branch of Kasei Valles that is a former location of a waterfall, although this isn't easy to spot on the mosaic that you will be posting." I found two HiRISE observations of a "dry falls in the southern branch of Kasei Valles" that you can check out if you want to explore that: ESP_013297_1980 and ESP_013152_1980.

Mars Express HRSC mosaics like this one fill an important niche in our views of Mars: they are in color and high-resolution enough to reveal interesting geomorphological detail, but low-resolution and wide-angle enough that it's possible to assemble mosaics covering features as vast as Kasei Valles. The only other such color regional imagery we have of Mars is from Viking. The Viking color mosaics are still in wide use; it's about time they were supplanted with better-quality images from more modern cameras. So here is just one way that Mars Express' longevity is really paying off. I can't wait to see what other great Martian features will be treated in Mars Express HRSC mosaics.

There is a great NOVA video about the mega flood that created the Channelled Scablands in Washington state. A glacier dammed a river in Montana creating Glacial Lake Missoula, and then the ice dam failed, unleashing a huge flood that travelled all the way through Washington state. The process repeated itself dozens of times, creating gigantic floods each time. Perhaps a similar process was at work on Mars. One key thing in looking for the source glacial lake in Montana was wave-cut shorelines up on the hills surrounding Missoula, Montana where the glacial lake was dammed up. (Minute 22:30 in the video) Here is a link to the video on Youtube: http://www.youtube.com/watch?v=4OIxK5m5qi8

Excuse my vulgarity, but does anyone else see a huge chicken in the first image ? (Kasei Valles, Mars, from Mars Express) Very pretty :) Ehrm .. btw, wouldn't that be 'by Mars Express' in English, as opposed to 'von Mars Express' in German ?

Oh, i forgot, on the subject of face-like features in space photos : A Face-like Structure Detection on Planet and Satellite Surfaces using Image Processing http://arxiv.org/abs/1306.3032 if anyone finds it useful.

Thanks Mike B. for the scablands vid, very intresting

Ditto to Mike B.! That PBS video is really intriguing! That also helps me understand better what we are seeing on Mars with images such as these.

Where did all the vast quantity of water come from originally. This question also applies to the earth's oceans?

The water could've been primordial, or it could've arrived through comet impacts, or (most likely) a combination of the two.