How radar tracking of asteroids helps us know where they are

I attended the Society for Astronomical Sciences symposium yesterday, and greatly enjoyed Lance Benner's talk on recent radar imaging of near-Earth asteroids. The talks were being recorded so should eventually be available online. But you can see a much longer version of the talk that he gave just a couple of weeks ago as part of the von Karman lecture series at JPL.

There was a lot of great stuff in his talk, so much that I could probably get ten blog posts out of it. Below is just one neat graphic. It concerns the recently discovered little asteroid 2013 FB8, just a little blob of a body about 75-ish meters across. First of all, here are images of the asteroid taken from Goldstone. 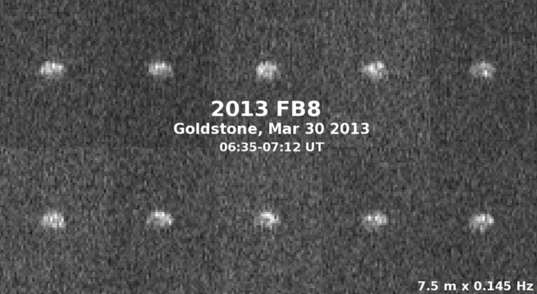 The radar images may not seem all that impressive; it's pretty blobby. If you squint, you might convince yourself that you see a bright fleck that rotates with the asteroid, which might be a big boulder or something on the surface. How do these kinds of observations help us?

Well, the graph below shows you just how valuable it is to "ping" near-Earth objects with radar. 2013 FB8 was discovered in the first half of March, so, only weeks prior. With such a short period of observation for an asteroid, there's a lot of uncertainty in the determination of its orbit. You can see that in the graph below. The x-axis is time; the y-axis is the 1-sigma positional uncertainty, in kilometers. "1-sigma" means 1 standard deviation from the mean; statistically, there is a 68% chance that the asteroid's actual position will be within that distance of its predicted position. (I think. I never took a statistics class, so take that with a grain of salt.) With the information known about the asteroid's position from traditional astrometry, you get the black squiggle. You can see how the uncertainty reaches as high as 3.3 million kilometers, or about 10 times the distance between Earth and the Moon. If this were a potentially hazardous asteroid, that amount of uncertainty would be a problem; it also makes it hard to "recover" the asteroid on its next pass close to Earth. But as soon as it was tracked by Goldstone, the much greater accuracy and precision of our knowledge of the asteroid's position collapsed that uncertainty down to the red line, which barely squiggles above the baseline, to a maximum of about 67,000 kilometers (about 10 Earth radii), a factor of 50 improvement in our understanding of the asteroid's path. Go Goldstone!

Thanks for the post, Emily. I enjoyed the lecture video. I'm being a bit nit-picky, but regarding the shown graphic, the data makes the point that radar vastly improves position prediction uncertainty, but I'm not sure 66,740 km is negligible as this graph of the data implies (the Earth is smaller than that). A logarithmic scale could improve the informational output of the plot. (sidenote: I was a physics undergrad at WashU while Benner was getting his PhD there; I also took a class from Ray Arvidson of the MER project - WashU is a great place for this science!)

That should say, "were made BETWEEN March 19th and 31st."

Telescope observations only give the relative angular position of an asteroid. It is somewhat like having a 2D GPS fix on one's position on the Earth and that can leave one's altitude above the ellipsiod in doubt. Radar ranging gives a 3D fix on an asteroid's position which reduces the uncertainty in an asteroid's orbital elements.