A serendipitous observation of tiny rocks in Jupiter's orbit by Galileo

Unable to get into a writing groove while on the plane flight on Monday, I gave up and shuffled through the folder on my computer where I've collected digital copies of interesting-looking scientific papers. The one I pulled out of the stack is an old one (from 2004), but it describes a neat observation that I had totally forgotten about. "The Galileo star scanner observations at Amalthea," by Paul Fieseler and seven coauthors, describes the accidental discovery of a pile of moonlets or boulders in orbit around Jupiter near the mini-moon Amalthea.

Amalthea is a funny-looking moon that circles Jupiter in a regular orbit (meaning that it's circular and aligned with Jupiter's equator). It is twice as long as it is wide, 262 by 146 by 124 kilometers, similar in proportions to Prometheus at Saturn, though Amalthea is a bit bigger, comparable to Saturn's moon Janus in mass. 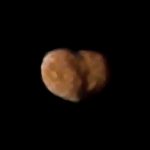 Galileo took this three-color image of Jupiter's little moon Amalthea on November 5, 1996, during its third orbit of Jupiter. Galileo was 876,000 kilometers away, viewing Amalthea at a phase angle of 31°.

Our imaging observations of it are pretty poor. Ted has done amazing work with that photo, but it's still just a blob. Here, then, is a Michael Carroll artwork produced on the occasion of the flyby. 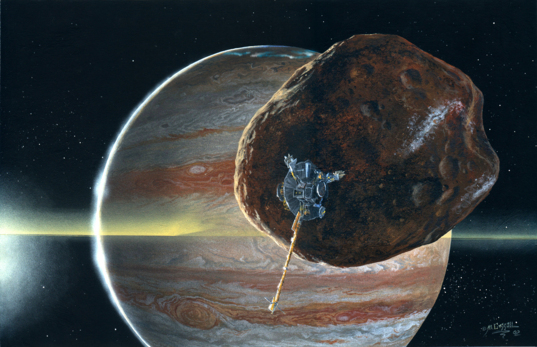 An artist's concept of Galileo passing near Jupiter's small inner moon Amalthea. Galileo flew past the tiny moon in November 2002.

Galileo got within 250 kilometers of Amalthea on November 5, 2002, but it was not doing imaging at the time. The encounter was known as the "A34 orbit." Galileo's orbits were numbered sequentially, with a letter indicating the moon that was the main encounter target for that orbit. A34 was the only orbit devoted to Amalthea. On the very next orbit, J35 (the "J" is for Jupiter), Galileo plunged into Jupiter's atmosphere, ending the mission. That happened on September 21, 2003.

As Paul and his coauthors describe in the paper, Galileo's spinning section was equipped with a star scanner that swept the sky in a plane about three times a minute. The scanner bore two slits. Bright stars showed up  as a pair of pulses recorded by the star scanner's detector as the star appeared first in one, then the other of the slits. Other bright light sources regularly showed up to the star scanner: Jupiter and the known moons. Just as we have done since time immemorial, Galileo's navigators (both autonomous and human) employed sightings of the stars to determine the ship's position and course. Here's a little more detail on how the star scanner worked.

Handicapped as it was by the failure of the high-gain antenna, Galileo returned precious little data to Earth. Even though it was powered on a majority of the time, most of the star scanner's navigation-related data was never transmitted. But the scanner had a second use that resulted in some of the data being squeezed through the narrow pipeline afforded by Galileo's low-gain antenna: "A secondary use of the star scanner has been to measure the flux of high energy electrons trapped in the jovian inner magnetosphere. In the A34 orbit, some star scanner data near Amalthea were recorded on the tape recorder and played back to allow study of Amalthea’s disturbance to the flux of these trapped electrons. Optical data from the instrument came down superfluously and was not expected to reveal any features other than stars, known moons and very occasional speckles of high energy particle induced noise."

But they were surprised. During the A34 orbit, there were nine other bright flashes detected by the star scanner, other light sources passing by the slits. A similar data set gathered during the J35 "orbit" -- in fact, taken just an hour before its death in Jupiter's clouds -- produced one more such sighting. 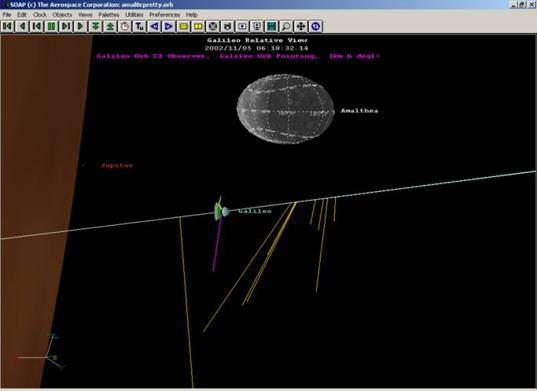 Model of Galileo passing Amalthea from left to right. Galileo will pass on the far side (sunny side) of Amalthea at about 48 degrees south latitude. The gold lines indicate a pointing vector from Galileo toward some of the rocks. Length of vector indicates the relative brightness of the object. One object exists somewhere in the direction of each vector. The star scanner was only taking observations to the south. Image drawn by SOAP from the Aerospace Corporation. Part of this image is based on work by Tony Taylor of the Galileo Navigation Team.

What were these flashes? They were all brief, meaning that if they were reflective objects they were either small enough or distant enough that the star scanner did not resolve them; they were mere points of light. There is no way of determining the range from Galileo to the bodies, but with a little bit of geometric analysis Paul and his coauthors found that seven of the nine bright flashes on the A34 observations could have come from bodies occupying positions on Amalthea's orbital path, just 250 kilometers or so (that is, about one long-axis diameter) from the moonlet; the other two weren't quite coincident, but could be very close to Amalthea's orbit. The single J35 flash could also have been from a body lying on Amalthea's orbit, although Amalthea was quite far away from Galileo at the time.

How big could these things be? Calculating that requires a ton of assumptions, but they could be as little as a meter or so across. They have to be smaller than about 11 kilometers across, or they would've been spotted in photos of Amalthea taken from much farther away.

All in all, it's likely that Galileo's star scanner spotted individual particles in an "Amalthea ring." Which is quite cool. It does make me wonder what other serendipitous discoveries could've been made if Galileo's antenna had worked. I have no doubt we missed quite a lot. We are overdue for another Jupiter mission.

There are tremendous discoveries waiting for us in the Jupiter system, if we can only get back there. The United States seems unable to muster sufficient support to start a new mission to Jupiter's moons. I'm grateful that the European Space Agency has managed to get started on their own orbiter, but it's going to be 20 years before JUICE arrives.

If you're an American citizen and don't think we should give up on outer planets exploration, write your representatives and tell them so. Or go one step further and actually make a visit to your representative while he or she is at the local office. One thing that I consistently hear from Washington is that your voice matters. It almost doesn't matter what your specific reasons are -- just contact them and tell them you support a strong planetary science program at NASA and that you consider space policy when you decide how to vote.

I was not aware of these observations, very cool. While I agree that a mission to the Jovian (and Saturnian) satellites is needed, let's not forget about JUNO, a mission currently en route to Jupiter. It is focused on Jupiter itself, but there are various cameras and spectrometers it seems likely to me that observations of the moons will be made. Given it's polar orbit, these may not be as good as Voayger or Gallileo data, but I imagine some interesting science will still be possible. My impression from NASA's evolving planetary budget is that there are thoughts of starting funding for a Europa-focused mission, but I admit a limited understanding of this issue. It will almost always be the case that from inception to execution of exciting outer solar system missions will take decades, which is certainly disheartening. My personal strategy with this is to shift my personal timeline to missions that were conceived decades ago that are or will soon be gathering data such as New Horizons (won't that be exciting!), Cassini, JUNO, Kepler (even in its current state), TESS, etc. Of course, without a clear forward-looking focus (something often lacking in Congress), our children's generation will have too few exciting discoveries.

I assume that the effect of the strong radiation close to Jupiter has been excluded as a possible cause of the flashes in the star scanner.

Darin, Europe is indeed planning to launch JUICE to orbit Ganymede; it will arrive in 2033, about 15 years after the death of Juno. Any American mission begun now would arrive even later. Enzo: yes, radiation effects were discounted.